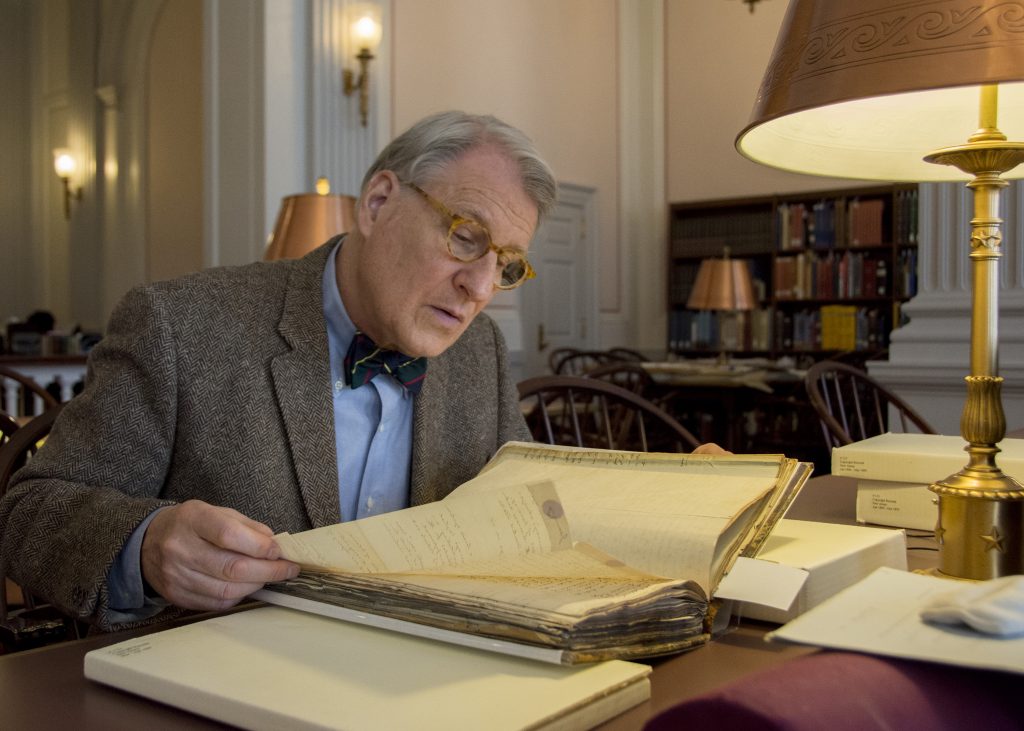 Copyright records are a valuable primary source for scholars seeking to understand the development of almost any aspect of American life. So wrote John Y. Cole, Library of Congress historian, in introducing a volume the Library published 30 years ago documenting the nation’s earliest copyright records—those dating from 1790 to 1800. They include copyright registrations for works as diverse as spelling books, maps, almanacs, sermons, and even a comedy in five acts.

President George Washington signed the first federal copyright law on May 31, 1790. It required authors to file printed title pages of their works with the district courts where they lived; after publication, the works themselves had to be sent to the Secretary of State. When Congress centralized copyright administration in the Library of Congress in 1870, most but not all of these early federal records were forwarded to the Library, as the law dictated.

New Jersey book collector and bibliographer Joseph Felcone spent several days in March in the Rare Book and Special Collections Division, which preserves the early copyright records held by the Library. Felcone’s goal: to transcribe the New Jersey records from 1846 to 1870.

In 1994, Felcone published a transcription of New Jersey copyright records from 1791 to 1845. He discovered those earlier records in a federal building in Trenton, the state capital. Researchers thought they had been lost or destroyed, but it simply turned out that no one had forwarded them to the Library in 1870. Researchers continue to locate other early copyright records, especially as more historical documents are being scanned and made available electronically.

Felcone took a break from his research in March to answer questions about his work and his findings.

What draws you to the early copyright records as a researcher?

I’m a book collector and a bibliographer, and I’ve written a lot about the early New Jersey book trade—printing and publishing—and copyright is part of it. Copyright records can provide considerable bibliographical information, some of which is available nowhere else.

What inspired you to transcribe the 1846–70 records?

When I was here several years ago working on another project, Mark Dimunation, chief of the Rare Book and Special Collections Division, showed me the 1846–70 New Jersey copyright records, and I saw all these wonderful tipped-in title pages, package labels, photographs and drawings, and I knew I had to publish those records. The earlier New Jersey volume I transcribed in 1994 contains no inserted material, only transcribed titles. The printed title pages that were submitted with those copyright applications long ago disappeared. However, by the early 1850s, as proprietors of patent medicines began seeking copyright protection for labels and trademarks, the clerks found it easier to simply paste in the supplied label rather than attempt to transcribe or describe it. Soon they were doing the same with title pages and graphics. 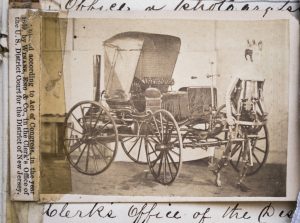 A photograph of a steam-powered robot pulling a wagon. The photo was registered in 1869 in U.S. District Court for the District of New Jersey. The court’s clerk pasted the photo into the copyright record book. Photo by Eric Frazier.

What do book registrations from this time tell you?

What’s most important to the historian is knowing about the books, pamphlets and other printed materials that were registered for copyright but do not exist today. This can often be tremendously valuable information. In some cases, these items don’t exist because they haven’t survived, or no copy has yet been found. However, most don’t exist because they were never published—even though the titles were registered. This tells us what an author or a publisher intended to do, and clearly worked on, but either did not finish, or finished but never printed. Copyright registrations provide the only record we have of these works.

What else do the records reveal?

Occasionally, though not often enough, you can learn the identity of the author of an anonymous or pseudonymous publication. When an author wished to remain anonymous, he or she normally would have the publisher apply for the copyright. However, once in a great while, a record will reveal that the author himself applied for the copyright, though the author’s name appears nowhere in the publication. I’ve had perhaps two instances of this in all the New Jersey records, but it can be of great importance, particularly in cases where an author later rose to prominence.

Valuable information is also found when a title is submitted for copyright and then, weeks or months later, the work is submitted a second time, with a different title. Since 19th-century titles could often be lengthy and very descriptive of a book’s contents, such title changes can reveal something about the creative process of an author.

What are the subjects of the book registrations you are transcribing now?

Quite a variety. Novels, plays, poetry, some how-to-do-it books. Several books on life insurance, which was an important industry in Newark beginning in the 1850s. There are a number of New Jersey histories, both local and statewide. Legal treatises were important, both professional works designed to assist members of the bench and bar as well as manuals of the everyman-his-own-lawyer variety.

Many of the works submitted for copyright were what we would call today “vanity” publications—the author was his own publisher as no commercial publisher would have taken on the work. Once I have completed my research, I think I’ll find that most of the works that haven’t survived, or that never saw the light of day, are of this genre.

What other types of registrations—besides books—are you finding?

Starting in the 1850s, almost half of the copyright registrations were for package labels—mostly for patent medicines. The advertised claims became more outrageous as time went on. After the Civil War, popular music became an important part of copyright registrations. I’m also finding maps, handbills, prints and photographs, political campaign badges, children’s games and artwork.

Who is the audience for your transcription?

Chiefly bibliographers and book historians—those who study the history of books, printing, the book trade, reading and so on. Also those interested in documenting the rise of popular or quack medicine as well as the advertising that drove that market. Also music historians and historians of photography—and of course New Jersey historians.

What are your most interesting finds so far?

As I mentioned, finding records of books that were contemplated, or even close to fruition, but probably never printed, are by far the most exciting finds. There are also two wonderful photographs in the records of steam-driven robots. The robots are fully dressed, top hat and all, but you can see the steam apparatus underneath, and the robot is pulling a wagon.

There are also two large pencil drawings by Lilly Martin Spencer—probably studies for paintings—that are almost certainly unknown to art historians. She was a very popular 19th-century artist who lived for years in Newark.

In the 1860s, Harold Brothers was a Plainfield, New Jersey, manufacturer of toys and games for children, and the records contain several delightful printed illustrations of its products, including directions for playing several of the games.

Can you comment on your research experience here at the Library of Congress?

Working in the Rare Book and Special Collections Division of the Library is a privilege and a pleasure. I have worked here many times, and it is always a perfect research experience.