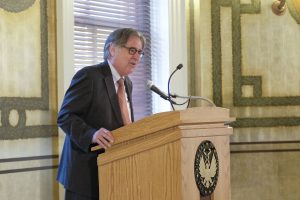 Kenneth Breisch discusses “American Libraries” at the Library of Congress in April. Photo by Shawn Miller.

For more than two centuries, American library architecture aspired to accommodate the physical dimensions of books and the furniture and spaces designed to store and display them. “American Libraries 1730–1950”—a new book by Kenneth Breisch—celebrates the history of that architecture, from classical temples to ivy-covered campus citadels to modern glass boxes—whose roofs now house more than just books, as technology continues to reshape our ideas about what a library can be.

Breisch started visiting the Library of Congress in the 1980s to research his first book, “Henry Hobson Richardson and the Small Public Library in America,” in the Prints and Photographs Division. Several years ago, Ford Peatross, the now-retired curator of the division’s architecture, design and engineering collections, approached Breisch to write “American Libraries” for the Visual Sourcebook Series, a collaboration between W.W. Norton and the Library of Congress. Published in 2017, the book includes more than 500 images from the Library’s collections.

Here Breisch answers questions about his research on library design and his work at the Library of Congress.

When did you become interested in library design and architecture?
When I was an undergraduate at the University of Michigan, one of my professors suggested that I write my senior honors thesis on the Hackley Public Library in Muskegon, Michigan, where I had gone to high school. In researching the library, I became aware of a vast amount of material on library planning and design in the Michigan Library Science Library that had been produced over the decades by American librarians. It had never been carefully examined by architectural historians and led to my Ph.D. dissertation, “Small Public Libraries in America 1850–90: The Invention and Evolution of a Building Type.”

How did American library design evolve?
The earliest libraries in America date to the late 17th century and were associated with the country’s first colleges. They were relatively small—enclosed in a single room—and were typically located in buildings that also housed classrooms, offices and the college chapel.

Toward the middle of the 18th century, wealthy American gentlemen, such as Thomas Jefferson, began to collect books, amassing private libraries of several dozen or occasionally even several thousand books. About the same time, other gentlemen pooled their money to form private library associations, which often formed the foundation for the first public libraries. These began to appear during the middle of 19th century. While some of them erected book halls to house their collections, it was not until later in the century that the public lending library, as we know it today, began to emerge as an important American institution. But books were still stored in closed rooms away from the public, and their use was usually restricted to the adult population.

During the late 19th and early 20th centuries, American librarians began to promote the “modern library idea,” stressing the need for utilitarian design and open planning. These features became hallmarks of public library building during subsequent decades. Library patrons benefited from associated concepts supported by progressive librarians, such as public accessibility to previously closed bookshelves and children’s reading rooms, as well as the later introduction of computers and other new technologies.

How has the design of libraries reflected the aspirations of patrons or builders?
During the 19th century, in particular, library-building patrons were often local industrialists, or the widows or children of these businessmen, who were interested in giving back to the communities where they had accumulated their wealth. These institutions were often named for their donors and thus acted as permanent family memorials. This pattern was eclipsed in the late 19th century by Andrew Carnegie’s offer to fund the erection of library buildings all across the United States, a program that continued until the onset of World War I. Whatever his personal motives, his philanthropy introduced the American public library to hundreds of small communities, which would never have had such cultural institutions. Based on this foundation, the public library emerged as a central component in the establishment of American civic life, a position—although now occasionally under siege—it has not surrendered.

How does the Library of Congress fit into this mix?
When the Jefferson Building of the Library of Congress was being planned in the late 19th century, its engineer, Bernard R. Green, introduced monumental metal book stacks to house the Library’s vast collections and conveyor belts and book elevators to efficiently deliver books to readers. In this respect, the building became the model for the modern and efficient library. Librarians, however, were less than pleased with what they viewed as the overly extravagant (and expensive) ornamentation of the Jefferson’s public spaces, so the Library also became for them a prime example of architectural excess, which they pointed to in promoting economy in library planning.

Which library buildings in the book do you find especially compelling?
Well, I have written books on the libraries of Henry Hobson Richardson and, more recently, on Bertram Goodhue’s Los Angeles Central Library building, so I have to admit being partial to these structures. But several more recent libraries such as the Beinecke Rare Book and Manuscript Library at Yale, which was designed in 1961 by Gordon Bunshaft of Skidmore, Owings and Merrill, or Louis Kahn’s Phillips Exeter Academy Library (1969–71), certainly stand out as two of the most beautiful buildings in the country.

Can you comment on your experience researching the book at the Library?
Due to the Library’s early and robust initiative to place images from the Prints and Photographs Division online, I was fortunate—since I live in California—to be able to develop much of my preliminary research over the internet. Because the division’s holdings are so vast, many images I used had not yet been scanned, so I also made numerous trips to Washington to look through the collections. Other images had not yet been cataloged, or had been very recently acquired, so I was introduced to still more “undiscovered” material through the encyclopedic knowledge of Ford Peatross. The result is a book that owes much to him, as well as many other generous members of the Library’s staff.