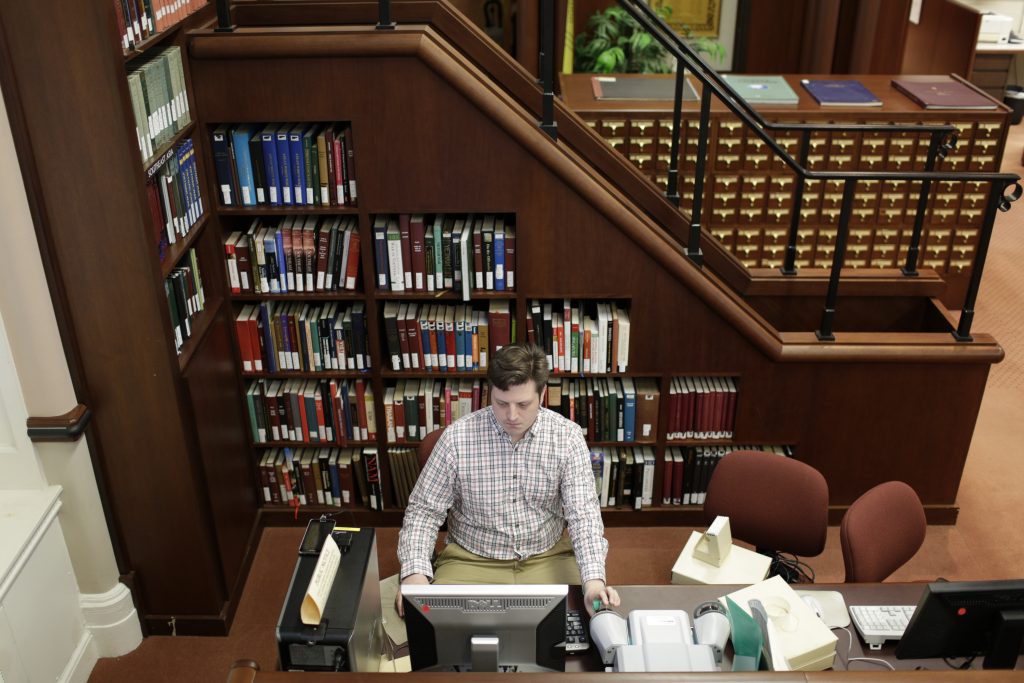 Ryan Wolfson-Ford researches serials in the Asian Reading Room on May 11. Photo by Shawn Miller.

Ryan Wolfson-Ford spent two weeks at the Library of Congress in May thanks to the Library’s Florence Tan Moeson Fellowship Program. It supports scholars pursuing research in Asian studies using the collections in the Library’s Asian Division.

Wolfson-Ford is completing his doctoral degree in history at the University of Wisconsin–Madison. His research focuses on Laos from 1945 to 1975—the era of the Vietnam War—specifically on the rule of the Royal Lao Government during that time. Wolfson-Ford consulted original documents in the Manuscript Division, including the diaries of longtime Royal Lao prime minister Souvanna Phouma, as well as holdings in the Asian Division.

Wolfson-Ford took a break from his research in the Asian Reading Room on May 12 to answer a few questions for “Inquiring Minds.”

What exactly will your dissertation explore?

The period from 1945 to 1975 is the only time that Laos had a democracy. It involved a major cultural and social shift as well as a change in the political order. My main focus is on the Royal Lao Government’s elite. Other historical studies have dismissed it, but it was crucial to the formation of the first government following the declaration of independence on October 12, 1945. While the Royal Lao Government lasted only a few decades—it lost power in 1975 after waging a civil war that started in 1959 against communist forces—it laid the foundations for modern Laos.

Why did you apply to do research at the Library, and which collections did you use?

I wanted to come to the Library mainly to research the diaries of Souvanna Phouma. He is a central figure in the Royal Lao Government period, but no historian has ever studied his diaries. They’re a major unutilized source for modern Lao history. For the first week, I worked in the Manuscript Reading Room with the Phouma diaries. The second week, I spent most of my time working with Lao newspapers in the Asian Reading Room. Newspapers are a valuable ephemeral source that have only recently been used to study Lao history. The Moeson Fellowship allowed me to complete research that has totally reshaped my understanding of the wartime years in Laos.

What was your most surprising discovery?

I was surprised to find that Phouma, a champion of neutrality in the aftermath of the First Indochina War in the 1950s, had by 1964 sanctioned U.S. bombing campaigns in Laos against North Vietnamese and Pathet Lao communist forces. He was not just bowing to pressure, but was in fact advancing the military campaign for his own reasons. He viewed the Ho Chi Minh Trail—along which communists carried men and material through Laos to South Vietnam—as an invasion that had to be stopped by force after negotiations failed.

What do you see as the importance of your findings at the Library?

My most important insight is that the war in Laos against communists, which paralleled the Vietnam War, was not just forced on the Lao by the U.S., but was in fact a Lao conflict. Royal Lao Government leaders had their own reasons to go to war, primarily to defend their independence and sovereignty and to halt what they saw as a communist takeover of the country. They wanted above all to safeguard the democracy they had built since 1945. It is unfortunate the U.S. did not fully appreciate their goals, limiting the effectiveness of the Lao–U.S. alliance.

How was your experience working at the Library?

Everyone at the Library was pleasant and professional and made working at a complicated place seem easy and enjoyable. Jeffery Flannery of the Manuscript Division was especially helpful in ensuring I had access to the Phouma diaries. He does a wonderful job providing access while also preserving and protecting documents for future generations. Chandell Butler of the Asian Division was very knowledgeable and answered all my questions and concerns fully. And Hong Ta-Moore, also of the Asian Division, has a great enthusiasm that is contagious, ensuring that my time at the Library was positive and productive.