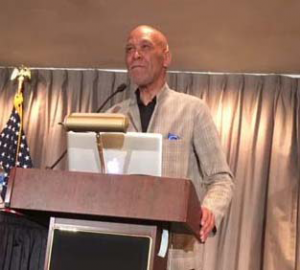 Robert O’Meally gave a lecture at the Library of Congress on May 10 as part of his residency at the Library as a jazz scholar. Photo by Laurel Howard.

Robert O’Meally spent two weeks in residence at the Library of Congress earlier this year researching all things jazz. He is the Zora Neale Hurston Professor of English and Comparative Literature at Columbia University and an authority on Ralph Ellison and African-American literature. He is also an internationally recognized scholar of jazz and founder of Columbia’s Center for Jazz Studies. He is known in particular for reaching across disciplines to interpret the place of jazz in American culture.

The Music Division hosted O’Meally through its Jazz Scholar Program, a collaborative effort of the Library and the Reva and David Logan Foundation. During his residency, he viewed holdings in the Music Division but also in the Manuscript Division, the Rare Book and Special Collections Division, the Prints and Photographs Division and the Motion Pictures, Broadcasting and Recorded Sound Division.

O’Meally’s books include “Lady Day: The Many Faces of Billie Holiday,” “The Craft of Ralph Ellison” and, most recently, “Romare Bearden: A Black Odyssey.” Several of O’Meally’s music projects have won awards, including his co-produced Smithsonian box set, “The Jazz Singers,” which was nominated for a Grammy Award. In recent years, O’Meally has also served as art co-curator for Jazz at Lincoln Center and curated exhibitions in New York, Paris and Istanbul.

Here he answers questions about his research at the Library and his scholarship.

What materials did you view at the Library?
In nearly every case, the collections I studied involved my ongoing work on Duke Ellington and Billy Strayhorn. But because of my interests beyond Ellington, and indeed beyond music as such, I also studied manuscript material of Zora Neale Hurston, information about the Broadway production “Swinging the Dream,” the libraries of Thomas Jefferson and Ralph Ellison and the paintings of Romare Bearden.

What surprised you most about the collections or the Library?
I have to say that it was a delightful shock to view a manuscript in Chopin’s handwriting as well as other scores in the handwriting of great composers. It surprised me that I was able – wearing white gloves as directed – to touch such magical materials. (Sometimes on back pages, secrets hide.)

Did you discover anything meaningful to the history of jazz that was new to you?
To me, it is highly significant that Max Roach was so very aware of his value as a composer and player of this music. And that he expected to be paid accordingly! I also was struck by how important it was to see Ellington and Strayhorn’s scores for “Such Sweet Thunder,” their Shakespearean “sweet.” It certainly changes my impressions of the piece to learn that Ellington wrote virtually all of it, and that the concert as a whole – Billy Strayhorn’s idea – represented a welcome-home gesture to Strayhorn, who’d been miffed at Duke for excluding him from proper credits. So this is a piece about reconciliation as well as one that reads African-American experience at the time of Little Rock and Greensboro (and of Sputnik and Aimé Césaire) through the kaleidoscopic lenses of William Shakespeare. No wonder that “Such Sweet’s” most prominent portraits are of Cleopatra and Othello.

You grew up in Washington, D.C., in a musical family. Did you have connections with the local jazz community as a youth?
I was born in Freedman’s Hospital on New Year’s Eve, 1948. So I came along at a time when the Bohemian Caverns, Blues Alley, the Showboat Lounge, Carter Baron Amphitheater and too many local clubs to mention were part of the scene. I played alto saxophone in Coolidge High School’s orchestra and marching band. Several kids in that band were gigging while still in high school. I sat in with a few of these youngsters’ combos in the mid-1960s. But my experience with professionals was primarily as a devoted fan. During those years, 1962 to 1966, I heard Sonny Stitt, Oscar Peterson, Jimmy Witherspoon, Sun Ra, Cecil Taylor, Charlie Byrd, Duke Ellington, Ella Fitzgerald, Ahmad Jamal, Ramsey Lewis (“Live at the Bohemian Caverns”) and many others!

What was the importance of the jazz scene to D.C.’s African-American community?
I don’t want to wax nostalgic on this question. But as I look back, I found that at a time of Smokey Robinson and Little Stevie and Elvis Presley, it was thrilling to connect with the music of my father and his friends – and to realize that aside from the 8- to 16-bar sax solos on a rock n’ roll record (some of which were fantastic!), there had been a man called Charlie Parker; there had been a woman called Billie Holiday. Going out on a date to the “Caves” (before heading back to the neighborhood for a dancing party!) meant that you expanded your range of appreciation and connected to your parents and their friends in new ways. And to girls who were also stretching their range of musical experience. I would say that Afro-music in general was a binding force for the community. And that since it was so sophisticated, it had the greatest powers to hold the community together, to express its most profound values.

What was it like working at the Library of Congress as a jazz scholar?
It was a thorough pleasure. I could sit quietly and think. Then if something came up concerning a musician, I could see the pertinent material immediately. The staff was beyond golden.

What is the value to scholars, and the public, of the Library acquiring collections like those you consulted and making them accessible?
When it comes to hard-digging scholarship and theorizing, jazz is still somewhat of an undiscovered continent. So as we as a nation finally begin to realize the vitality of this music – and of its importance as model for writers and visual artists as well as for musicians whose category may be far from “jazz” – collecting and studying this still relatively new work is of the utmost importance. We need to do all we can to obtain materials while a precious few of those musical revolutionaries – those like Jimmy Heath, for example, and his brilliant brother Albert Heath, who helped create the language of jazz – are still alive to tell their versions of where the music comes from and what it means.