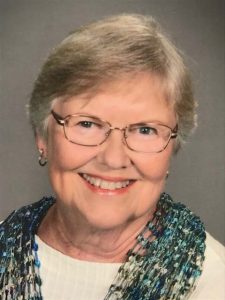 Peggy Lundeen Johnson is the great-great-granddaughter of Samuel J. Gibson. He fought for the Union during the Civil War and was incarcerated in the Confederate military prison in Andersonville, Georgia, in 1864. While there, he kept a daily log of his experience. Johnson was unaware of the diary until she encountered it on the Library’s blog. In this post, she reflects on what the discovery has meant to her and her family.

To coincide with publication of this interview, and in honor of Veterans Day, the Library is inviting the public to transcribe Gibson’s diary through By the People, the Library’s crowdsourced transcription project. Try your hand at transcribing the diary, another Civil War collection or one of the many other original manuscripts included in the project. Help us make these important documents more accessible!

How did you find out about Gibson’s diary?
I was visiting Illinois last summer and had dinner one evening with my cousin and his wife. He said that he had a book about Andersonville and in it was a quote from Samuel Gibson’s diary. Up until that moment, I had no idea that there was a diary. When I got home to Southern California, where I live, I typed in Samuel Gibson’s name on the Library of Congress site and found the diary and a letter from Samuel to his wife, Rachel. I also found the blog post about the diary and commented on my reaction to reading it, explaining that Samuel was my great-great-grandfather. 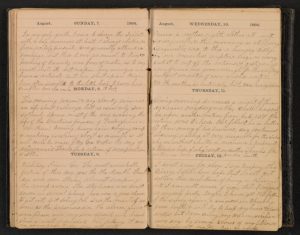 What did you know beforehand about Gibson’s life?
What little I know about Samuel’s life, I learned from doing a little genealogy over the last few years and reading his wife, Rachel’s, obituary from 1916. It wasn’t until I was an adult that I learned of Samuel’s service and that he had been a prisoner at Andersonville. I know that Samuel was a teacher and had some college education before enlisting in the Army in 1861. For some reason, my mother’s family never talked about it — Samuel is my great-great-grandfather on my mother’s side of the family. Mother did mention one time that Samuel and his family were buried in the Galva, Illinois, cemetery, so I found their grave sites one time when I was visiting her. I was raised in Galva, the same town where Samuel and Rachel lived after he was discharged from the Army.

What was your reaction upon reading the diary?
It was very emotional reading the diary for the first time. I was struck by how strong a man he was in the face of such adversity. He kept his mind sharp by doing algebra and writing down his observations each day. He had great compassion for his fellow soldiers and did what he could to relieve some of their suffering, even while he was suffering. His reference to President Lincoln being elected to his second term was very interesting to me. He told of the horrors at Andersonville and the cruelty of the soldiers holding them captive. I’m very proud of Samuel Gibson. 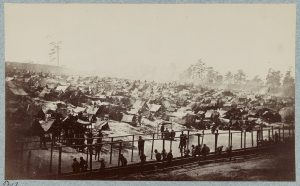 Do you know what happened to Gibson after his release from prison?
After he was released, Samuel, Rachel and their daughter, Ella, left their home in Pennsylvania and moved to a farm near Galva, where I believe Rachel had family. They went on to have three more daughters, two of whom died young, and they are buried in Galva — they are the family members whose graves I found. Samuel was ill much of the rest of his life due to disease he had contracted at Andersonville. He lived only 14 more years and died at age 45 in 1879. Rachel lived to be 80 years old and died in 1916. Her obituary says she reread all of Samuel’s letters to her in the last few months of her life. As far as I know, only one letter has been preserved, and that is the one at the Library of Congress.

What is the value of the diary to your family?
The diary adds another layer to our family’s history. I have children and grandchildren, and I am encouraging all of them to take the time to read the diary from cover to cover. They need to see and hear what a patriot their ancestor was and how strong he stood in adversity. I don’t know how the Library obtained the diary and letter to Rachel, but I am so glad that they are being preserved so that future generations can read them. I’m very proud to be Samuel Gibson’s great-great-granddaughter, and I will continue to tell his story.