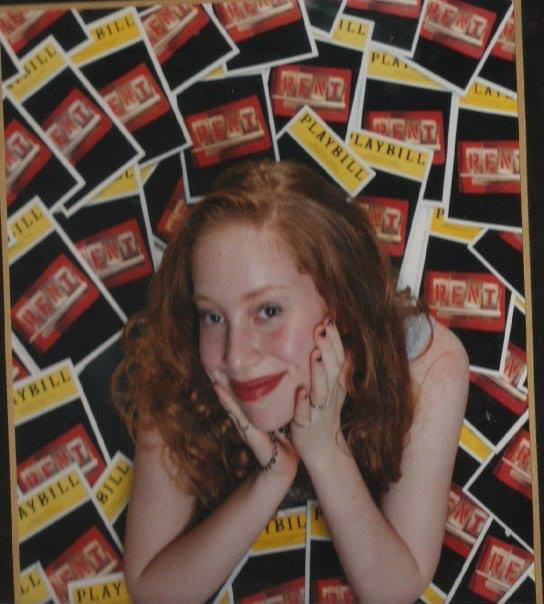 The following is a guest post by theater historian Jennifer Ashley Tepper, the creative and programming director at Feinstein’s/54 Below, a Broadway supper club in New York City. From October 9 to 14, the club will present “The Jonathan Larson Project,” a concert of previously unheard work by the late composer and playwright. Tepper, who conceived of the concert and directs it, writes here about how she found inspiration in the Library’s Jonathan Larson Collection. Tepper is also author of “The Untold Stories of Broadway” book series, producer of the musical “Be More Chill” and historian-consultant for the upcoming movie “Tick, Tick … BOOM,” based on Larson’s autobiographical musical. An expanded version of this post first appeared on “In the Muse,” the Library’s performing arts blog.

Tepper’s April 1999 Bat Mitzvah sign-in board featured her popping out of a pile of playbills for the Jonathan Larson musical “Rent.”

I grew up inspired by Jonathan Larson’s musicals. Even as a teenager living in Boca Raton, Florida, I identified deeply with his ideals: with his unwavering dedication to art made from the heart, with his passion for bringing musical theater to a new generation, with the devotion to friendship and community layered into all of his work – and of course, with his undeniable genius in channeling all of this into characters, stories and songs that have changed the world.

When my close friend Jason SweetTooth Williams was appearing in “Freaky Friday” in Washington, D.C., in fall 2016, I went to visit him and spent a day at the Library of Congress, immersed in the Jonathan Larson Collection.

I have worked as a theater historian for almost a decade now, and nothing has knocked me out quite like this collection did that day.

There were hundreds of hours of audio recordings and hundreds of files of written material: each one incredible. I sat at the Library that day feeling like the little mermaid in her grotto, marveling at treasures galore from a time and place I longed to transport myself to: Jonathan Larson’s world.

The recordings included a momentous reading of Jonathan’s unproduced musical “Superbia,” followed by discussion of the piece with a panel of writers including Stephen Sondheim; a hilarious tune written on spec for “Saturday Night Live” with Ben Stiller and Jeff Kahn; mix tapes filled with pop and rock songs taped off the radio that inspired the characters of Larson’s smash musical “Rent”; songs from promising-but-never-produced musicals about presidential elections (“National Lampoon’s Tricentennial Revue”) and the end of the world (“1984”); and much more.

The written material was equally exhilarating to explore. A letter from theater producer Jeffrey Seller to Jonathan in 1990, telling him how much he’d loved his concert of “Boho Days” (an early version of “Tick, Tick … Boom!”); an outline for a musical version of “Polar Express”; original audition notes for “Rent” at New York Theatre Workshop; scripts and lyric drafts and budgets and programs and sheet music and photos and letters. Free-style essays. Lists of words. Journal entries.

I returned to the Library of Congress half a dozen times over the next year. I spent days going through the recordings and folders. After that first visit, I connected with Julie Larson, Jonathan’s sister, who generously gave me permission to go full steam ahead with my show “The Jonathan Larson Project.”

A piece featuring Jonathan’s unheard works deserved a creator who was going to listen to every tape and read every page. It was a privilege to do so. “Privilege” doesn’t cover it – it was the adventure of a theater historian’s wildest dreams. It was also at times devastating. With Jonathan’s voice in my ears and his papers in my hands, I could see with a new level of intimacy how hard he persevered and how ahead of his time he was.

Jonathan saved dozens of rejection letters. He rewrote shows endlessly. He did everything he could to try to convince the powers-that-be of the 1980s and 1990s that he was the future of musical theatre, that he was going to change its sound. He worked hard to create musicals and songs about what was really happening in the world, that sounded like the time he was living in. He pinched every penny and banged on every door. And he didn’t get to live to see that every dream he ever had came true.

Jonathan’s papers allowed me to see the man behind the work better than ever before. So much of theater history is about what’s scrawled in the margins. Jonathan’s margins are rich with details of his inspirations, frustrations, ideas and loves. I delighted in finding Jonathan’s “They’re Playing Our Song” playbill from when he saw the show on Broadway at age 18. On the cover he wrote down one Carole Bayer Sager lyric from the show in red pen: “Does the man make the music or does the music make the man?” On a notebook page related to “Rent,” Jonathan also scribbled the lyric from “Merrily We Roll Along” – “We’re opening doors” – and underlined it three times. Underneath it, he wrote “why they won’t ever sell out.” Finding Jonathan’s personal connections to other musical theater felt revealing and significant.

Even though 95 percent of what I discovered at the Library of Congress will not literally be part of “The Jonathan Larson Project,” it will all be part of the concert in a way. The opportunity to learn so much about a man and artist I have admired endlessly has impacted the piece immeasurably. I will be staging a cut song from “Superbia,” having read six drafts of the show. I will be collaborating with actors on songs about loss, knowing in detail about those friends Jonathan lost and loved dearly. I will be bringing to life songs that have never before been performed publicly, which reveal pieces of Jonathan’s life and era I understand profoundly because of all I was able to access.

Jonathan was indeed the future of musical theater, and his work changed the world. Now, because of this collection, new audiences will experience songs and ideas of Jonathan’s that were previously only experienced by one woman, wiping away tears at a library desk.

To days of inspiration.