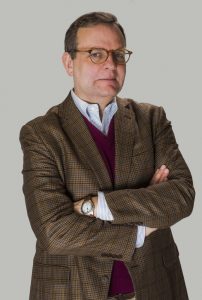 The following is a guest post by Todd S. Purdum, a contributing editor at Vanity Fair, a senior writer at Politico and author of “Something Wonderful: Rodgers and Hammerstein’s Broadway Revolution,” published this month by Henry Holt. For more about Broadway, keep an eye out for “Brilliant Broadway,” the May–June issue of LCM, the Library of Congress Magazine. The issue, to be published shortly, will be available in its entirety online.

For a lover of musical theater and the Great American Songbook, entering the quiet precincts of the Performing Arts Reading Room at the Library of Congress is akin to sneaking into the cave of Ali Baba or King Tut’s tomb, a magical realm full of hidden treasures and unexpected gems. The weeks I spent there over the last three years, researching my new biography of Richard Rodgers and Oscar Hammerstein II, were a golden time.

The Music Division is home to the manuscripts of George and Ira Gershwin, Irving Berlin, Marvin Hamlisch and many others, including, of course, Richard Rodgers, and it also houses the vast bulk of the letters, papers, draft lyrics and libretti of Oscar Hammerstein. (Rodgers’ literary papers are mostly archived at the New York Public Library for the Performing Arts at Lincoln Center in Manhattan.)

The Library of Congress acquired the Oscar Hammerstein II Collection piecemeal after Hammerstein’s death from stomach cancer in 1960. In 2015, when I began my research, the papers had long been open to scholars, but had yet to be fully organized or processed. So my dogged digging through them was both a rare privilege and a special challenge. Some of the papers were stored in the moving boxes in which they’d originally arrived, and a manila folder labeled “Farm Equipment” might well instead contain bowdlerized lyrics for the film version of “Carousel.” 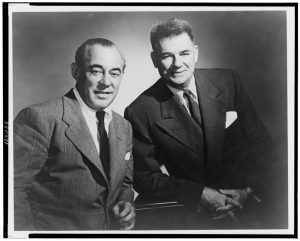 But the papers, which have since been more formally processed, constitute a rich survey of the American theater for the first two-thirds of the 20th century, beginning with Hammerstein’s early work with Jerome Kern, Sigmund Romberg and others, before he teamed up with Rodgers in 1942. A virtual Who’s Who of American political and artistic life parades through the hundreds of folders and dozens of boxes, with Hammerstein’s own wise, wry voice at the center of everything.

It was hard to peruse some discoveries without having the hair go up on the back of your neck. For instance, there was Hammerstein’s hand-drawn map of Claremore, Oklahoma, showing the locations of the characters’ homes in “Oklahoma!” Or his fragment of a draft lyric for “My Favorite Things” from “The Sound of Music”:

Or his personally annotated copy of James A. Michener’s “Tales of the South Pacific,” in which he made red grease-penciled checkmarks in the margins, and notes about characters and plotlines. 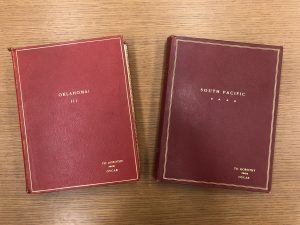 There were other less expected finds as well, like the series of red leather-bound scrapbooks, with silk moire endpapers, that Hammerstein compiled for his wife, Dorothy, for each of his shows with Rodgers, starting with “Oklahoma!” And his collection of autographs from 19th-century literary figures like Mark Twain. And his wide-ranging correspondence with world-famous figures and ordinary people alike.

The Music Division, and its deeply knowledgeable and friendly staff, is a precious national resource. Blessedly for a researcher who was also a transcontinental commuter from my home in Los Angeles, it is also open on Saturdays, making each weeklong visit to Washington just that much more productive. It’s no exaggeration to say that the division contains more than a few of my favorite things. It probably has some of yours, too.

This post first appeared on “In the Muse,” the blog of the Library’s Music Division.