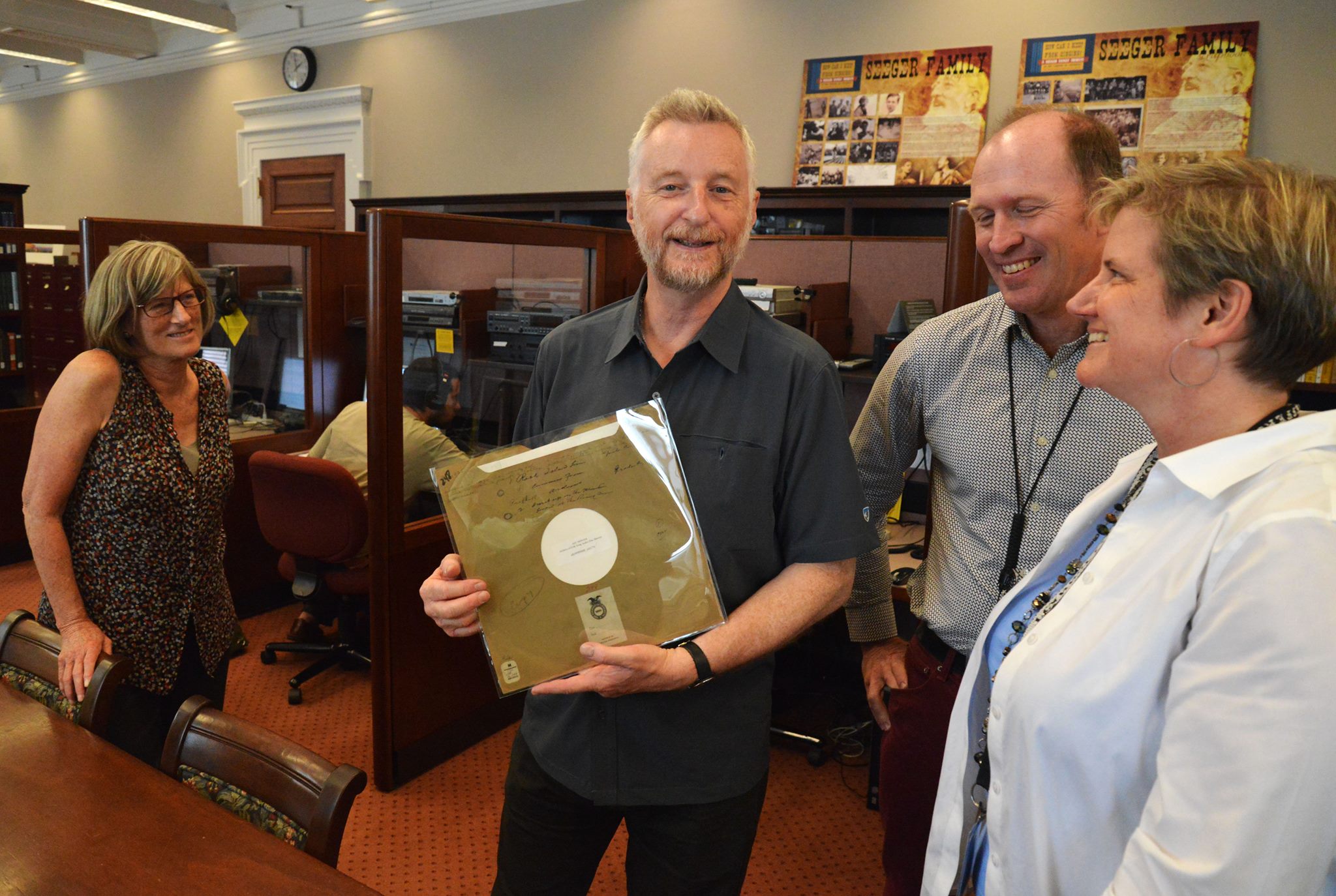 Billy Bragg, center, visited the American Folklife Center offices in July when he came to the Library to talk about his new book about skiffle. The 1950s music genre popularized the guitar, inspiring John Lennon, Jimmy Page, David Bowie and many others to embark on music careers. Here Bragg holds the original record sleeve for a 1934 field recording of ”Rock Island Line” from the John A. Lomax Southern States Collection. The song launched the skiffle craze in England when singer and musician Lonnie Donegan had a major hit with it in 1956. With Bragg are, from left, Folklife Center senior staff members Betsy Peterson, John Fenn and Nicole Saylor. Photo by Stephen Winick.

When Stephen Winick of the American Folklife Center learned about Billy Bragg’s 2016 album, “Shine a Light,” he quickly contacted the album’s publicist to invite the English singer-songwriter to speak at the Library. The reason: the album, recorded with American folksinger Joe Henry, includes several songs known to the world thanks to recordings in the Library’s folk archive. Sadly, Bragg was too busy during his 2016 tour to come.

What Winick didn’t know at the time was that “Shine a Light” came about because of Bragg’s research for a book about skiffle—a genre heavily influenced by many recordings in the Library’s archive. Skiffle was a homegrown music craze in 1950s and 1960s England that skyrocketed the guitar to the forefront of the music scene. The Beatles, Led Zeppelin, The Faces, The Rolling Stones, The Who, The Kinks and David Bowie all started out playing skiffle.

Earlier this year, when Bragg published his skiffle book, “Roots, Radicals and Rockers: How Skiffle Changed the World,” he thought the time was right to speak at the Library. But he had a problem: he couldn’t recall who had extended the invitation to him the previous year.

Here Winick tells the story of how he connected with Bragg, and he answers questions about skiffle and its precursors in the Library’s folk archive. Bragg appeared at the Library on July 21 in an event co-sponsored by the Folklife Center and the Folklore Society of Greater Washington. A recording of Bragg’s talk is available on the Library’s website.

First, tell us a little about Billy Bragg.

Billy Bragg is a singer-songwriter who came to prominence in the 1980s. He came out of the punk movement, but he performed solo with a guitar, which made his music very similar to the singer-songwriters on the folk scene. He began to get interested in political songwriting around the time of the big UK miners’ strike in 1984 and 1985, which aligned him even more with the ideals of the folk movement. In the 1980s, he was often called “folk-punk.” In his first couple of years, he had a hit with one of his love songs, “A New England,” when it was covered by the pop singer Kirsty MacColl. Then a year or two later, he found himself singing a very political song called “Between the Wars” on “Top of the Pops,” a major English pop music TV show. He’s continued over the years to write very moving songs about human relationships and also witty polemical songs about politics.

Another thing Billy is known for is his work with Woody Guthrie’s lyrics. In the late 1990s, Woody Guthrie’s family realized that, in addition to his famous songs like “This Land is Your Land” and “Pastures of Plenty,” Woody had written thousands of lyrics for which no music survived. The family decided to get someone to write music for them. In trying to think about who might be a modern equivalent of Woody, they came up with the idea of asking Billy Bragg. So Billy set some of these great lyrics to music. The Guthries also called in the group Wilco, and eventually Billy Bragg and Wilco released the three albums that make up the “Mermaid Avenue Sessions.” Of course, Woody is a figure forever associated with the Library of Congress folk archive, since his first extensive recording sessions were here in 1940. So this was one of the first connections I knew about between Billy Bragg and the archive.

I have to confess that I first met him as a fan in the 1980s. Billy’s about 10 years older than I am, so his initial success as a musician happened when I was a teenager. I was buying his records and going to his concerts when he visited the U.S. I got my girlfriend at the time to listen to Billy’s music, and she loved it. Her name is Jenny Lewis, and her brother Avi was a host on the TV channel MuchMusic, which was Canada’s answer to MTV. So Jenny raved to Avi about Billy Bragg. She says that it was partly because of us that Billy got airplay on MuchMusic in the 1980s. Avi eventually moved on and became a political journalist but remained friends with Billy.

Their friendship came in handy for me later. After I tried and failed to get Billy to come to the Library in conjunction with the “Shine a Light” album, he decided he wanted to come here to talk about his book. But we had only been in touch through a publicist, whom he wasn’t working with anymore, so he had to find me again. Luckily, he remembered the story about Avi’s sister’s former boyfriend being a Billy Bragg fan at the Library of Congress. So he reached out through the Lewises. I got a message from Jenny saying, “Send me your contact info at work. Billy Bragg wants to meet with you.” It turned out that Billy and I were both going to be at the Folk Alliance International meeting in Kansas City this past February, so we met there and hatched the plan for him to come here.

What, exactly, is skiffle?

Skiffle is a music genre that was created in the 1950s in Britain. It grew out of the scene called “Trad Jazz,” which is essentially New Orleans-style jazz—a lot of ensemble playing with almost no solos. In clubs with no amplification, everyone played loud. With no time for one player to rest while another played a solo, the brass players’ lips periodically went numb. They had to take breaks throughout the evening. To avoid losing the audience, some bands figured out that they could have their string players and drummers keep playing and do mini-sets between the band numbers. A lineup developed that included a singer with a guitar along with double bass and drums or percussion. The bigger bands were already playing African-American music. So for repertoire, these smaller ensembles looked to another facet of the same root tradition: African-American folksong. They ended up doing mostly covers of black American folk ballads and blues.

The most famous skiffle artist was Lonnie Donegan. He was a member of two of the top Trad Jazz bands, Ken Colyer’s Jazzmen and The Chris Barber Jazz Band. In the jazz bands, he played banjo, but when the breaks occurred he was the guitarist and singer for the smaller groups. For both Colyer and Barber, he recorded a few skiffle numbers to fill out their jazz albums in 1954. One of the songs he recorded with Barber, “Rock Island Line,” was reissued as a single in late 1955. It was a surprise hit in the final week of the year and became one of the biggest hits of 1956. From there, skiffle took off and was one of the most popular styles in Britain for a few years.

What is the importance of skiffle in the music world?

It was the first guitar-led music to become popular in Britain. It was a pretty simple music, too—before rock-and-roll or R&B came to Britain, it was the first style where you could play a song with three chords on a guitar. As a result, huge numbers of kids started playing music. Teenage skiffle bands sprang up everywhere, mostly with a guitar, a homemade bass made out of a tea chest (a ubiquitous kind of packing crate in Britain) and a washboard for percussion. Although as a fad, skiffle didn’t last that long, it made a whole generation of teenagers pick up guitars. Those teenagers included Paul McCartney, John Lennon, George Harrison, Van Morrison, Jimmy Page, Dave Davies, David Bowie, Roger Daltrey and lots of other rock musicians, as well as Martin Carthy, John Renbourn and many others on the folk scene. The British rock explosion in the 1960s, as well as the folk scene of that era, both came out of skiffle.

What is the connection between the Library’s folk archive and the skiffle craze?

I mentioned that the repertoire that skiffle folks drew on was largely African-American folksong. Specifically, that 1956 hit for Lonnie Donegan, “Rock Island Line,” was a song he had learned from a record by Huddie Ledbetter, better known as “Lead Belly.” In 1934, Lead Belly was an assistant to John Lomax, a collector for the Library of Congress, when “Rock Island Line” was collected from several prison work gangs in Arkansas. Lead Belly learned the song and sang it himself for Lomax. So the Library has the original field recordings, for which Lead Belly was part of the recording crew, and also the first recordings of Lead Belly singing “Rock Island Line.” It was one of many Lead Belly songs from the archive to be made into skiffle hits, including “Bring a Little Water, Sylvie,” “Midnight Special,” “Diggin’ My Potatoes,” “Ol’ Rattler,” “Pick a Bale of Cotton” and others. As Billy points out, George Harrison once said, “No Lead Belly, no Lonnie Donegan. No Lonnie Donegan, no Beatles.”

More generally, the Library of Congress folk archive made its field recordings available as albums as early as the 1940s, edited by archivists Alan Lomax, Benjamin Botkin and later Duncan Emrich. Crucially, the United States Information Service maintained a lending library in London with the goal of spreading American ideals through exposure to our culture. That library stocked the archive’s records. So a generation of young people, including Lonnie Donegan, were able to listen to Library of Congress field recordings, which became one of the most important sources for the skiffle repertoire. You can listen to the Lead Belly recording of “Midnight Special” here:

Why don’t we know more about the genre, given its influence?

Two reasons, I think. First, the fad never happened in the U.S. The closest American equivalent as a movement was rockabilly. But there was never a genre called “skiffle” here, so it’s like a lot of cultural things that British people would recognize but Americans wouldn’t. If you told most Americans you had some scrumpy at a knees-up, or that you were getting into grime music, most of us wouldn’t know those cultural references. Second, the fad was short-lived, and almost every skiffler who got truly famous, except for Lonnie Donegan himself, got famous for later pop styles, especially rock. So “skiffle” is an unfamiliar name for a phase in the career of musicians like Paul McCartney. It’s not the phase that we remember, it’s the longer careers of those skiffle kids.

Still, taken on its own terms, skiffle played a vital role in 20th-century pop music, which I think Billy Bragg’s book and his talk at the Library both highlight really well. I was delighted to bring him to the Library, and I’m glad the talk is online for people to watch and learn from.