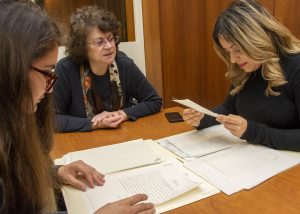 For more than 20 years now, Saundra Rose Maley has required her English composition students — first from George Washington University in Washington, D.C., and now from nearby Montgomery College in Montgomery County, Maryland — to make a short trek to the Library of Congress. There, in the Manuscript Division, the students research primary sources, looking for a subject that captures their imagination. By the end of the semester, the students must write a paper reporting on what they discovered.

Besides being an English professor, Maley is a textbook writer and poet. She has published in journals including The Calvert Review, Dryad, Beltway Poetry Quarterly, Sligo Journal and Innisfree Poetry Journal. Her first book of poems, “Disappearing Act,” was published in 2015. She also co-edited with Anne Wright “A Wild Perfection: The Selected Letters of James Wright,” and she is now working with Anne Wright on a book about James Wright and translation.

Here Maley answers a few questions about her background and her association with the Library.

Tell us a little about your background.
I’m a second-generation native Washingtonian and my family moved to Silver Spring, Maryland, when I was a senior in high school. So, for in-state tuition I was able to go to the University of Maryland for my bachelor’s in English, my master’s in English and finally my Ph. D. in English — maybe a record! Obviously, I am not big on change, but I am adventurous when it comes to research and writing — that’s one reason I started to send my students to the Manuscript Division of the Library of Congress.

What prompted you to start assigning your students to do research at the Library?
When I finished my dissertation on the poet James Wright, a professor sent me to see another University of Maryland graduate, Francis Burkle-Young, to help me format my footnotes, which back then were too many for my primitive word processor to handle.

Subsequently, Young and I co-wrote two textbooks — “The Art of the Footnote: The Intelligent Student’s Guide to the Art and Science of Annotating Texts” and “The Research Guide for the Digital Age: A New Handbook to Research and Writing for the Serious Student” — neither of which, for obvious reasons, became a bestseller. But just writing the books was an education in the art of research for me.

Young was a historian and a researcher’s researcher. He had spent many hours in the Main Reading Room of the Library as a boy when his mother worked there. Although my first love is and always has been poetry, my research on James Wright sparked a love of research in me.

Young encouraged my “inner-researcher” to think about sending my composition students to do research at the Library of Congress. I took him up on that idea and have been doing so ever since.

What, exactly, do you ask your students to do?
I ask them to think of themselves as scholarly detectives trying to find an original piece of information or a new slant on a person whose papers are in the Manuscript Division. I steer them toward some unknown figures, but allow them to work on more notable characters if they can dig around in the primary sources and find something new to write about.

How have they responded to being assigned Library research?
Most students are excited about the prospect of doing research at the Library and, at the same time, somewhat intimidated, but I walk them through the process. Every semester there are at least five (maybe more) students who turn out to be excellent researchers and discover that they really like doing the work. Some even decide to change their majors when they discover something intriguing about their research subject or that person’s field that interests them a great deal. I often put it to them this way: If no one had ever thrown a basketball to LeBron James, he would never have known how good he was at basketball. Of course, the names of the athletes have changed over the years.

Even those students who don’t turn out to be “basketball” stars get a great deal out of the experience of going to the Manuscript Division, which most visit at least twice — others go many times during the semester. Since the course I teach is a composition course, I am always amazed at how much every student’s writing improves as a result of the research. The reading of scholarly biographies, articles and other sources they dig up makes a big difference in their writing and in the way they think about research. I see their confidence grow.

What are some of the students’ more surprising findings?
Every semester I learn a great deal from my students and their research, and this keeps things interesting for me and for them. The collections are treasure troves, and I ask students to bring in copies of the primary sources they are using (letters, diary entries, notebooks, speeches and so on) to show to the class. This way we all have a chance to see these rare materials. The students bring back photos on their cell phones or copies on flash drives to show on the drop-down screens in the classroom. Sometimes we have to puzzle out the cursive and the context, which can be difficult, but is always rewarding.

Here are a few interesting finds students have brought in over the years:

How have you worked with staff over the years?
When I first started sending my students to the Manuscript Division, I had to write individual letters of introduction for each student, since the division requires such letters for undergraduates. After consulting with Jeff Flannery, head of the Manuscript Reading Room, we decided that Patrick Kerwin, a manuscript reference librarian, would instruct the class each semester to prepare students prior to their visits. This has been a great help. The students feel more comfortable about going to the Library after having met Patrick, and he goes out of his way to be helpful to them throughout the semester. Students come back to class with stories of how Patrick and the other librarians guide them to relevant resources and materials for their research — the librarians make this experience invaluable for my students.

Do you have advice for other professors considering asking their students to use the Library’s resources?
I think I would say to them, especially those who teach at colleges and universities in the Washington, D.C., metro area, why not give the students the opportunity to visit the Library of Congress, one of the greatest libraries in the world? For those professors who are not in the area, I would suggest they look into ways to use the online collections that have been digitized. There are many — Frederick Douglass, Alexander Graham Bell, Clara Barton, Susan B. Anthony, Benjamin Franklin and Ulysses S. Grant, to name a few.

As the Library’s online page for teachers states: “Primary sources are the raw materials of history.”