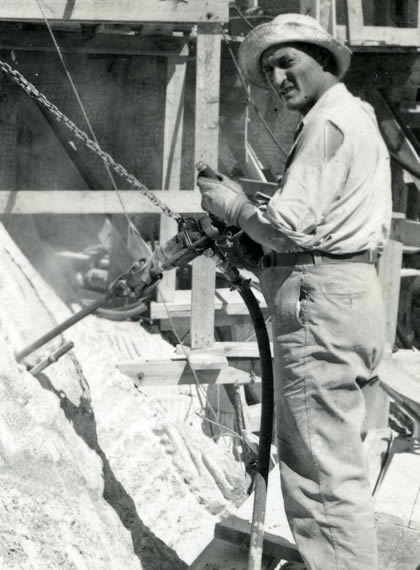 Luigi Del Bianco works on one of the famous faces of Mount Rushmore. Photograph used with permission.

Last month, relatives of Luigi Del Bianco gathered in Keystone, South Dakota, for a very special ceremony: the National Park Service unveiled a plaque on September 16 at the Mount Rushmore National Memorial recognizing the late Del Bianco as the chief carver of Mount Rushmore—76 years after its completion.

For more than 30 years previously, the Del Bianco family had collected evidence documenting Luigi’s role in rendering Mount Rushmore one of the most beloved landmarks in America. The effort began in the mid-1980s when Caesar, Luigi’s son, was taken aback to find that a major book about Mount Rushmore’s carving made no mention of Luigi. He enlisted his nephew, Lou, on a mission to help rectify the oversight.

Research at the Library of Congress, where Caesar spent days in the Manuscript Division sorting through the Gutzon Borglum Papers, turned out to be a deciding factor. Borglum, a noted sculptor, designed Mount Rushmore, and his family donated his papers to the Library in the 1950s and 1960s.

Here Lou answers questions about his grandfather, the family’s quest to have his contribution honored and the letters and memoranda that helped.

Tell us a little about your grandfather.

My grandfather was born in 1892 on a ship off the port of Le Havre, France. His family was returning home to the village of Meduno, located in Italy in the region of Friuli-Venezia Giulia. At age 11, he studied stone carving in Austria and then Venice before coming to America in 1908, where he worked as a memorial stone carver in Barre, Vermont. He went back to Italy in 1914 to fight in World War I with the Italian army but returned to Barre in 1920. Later, he married and settled in Port Chester, New York, with his family and established a successful memorial stone carving business there. 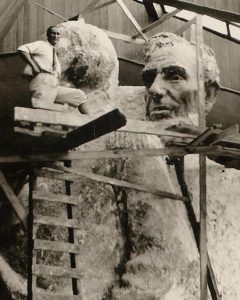 Del Bianco with a model of Mount Rushmore in Borglum’s studio, circa 1935. Photograph used with permission.

How did your grandfather meet Gutzon Borglum?

In 1920, after Luigi returned to Barre, he met a fellow stone carver named Alfonso Scafa, who told Luigi, “You have great talent. I work for the sculptor Gutzon Borglum on his estate on Stamford, Connecticut. You must meet him.” Alfonso brought Luigi to Stamford, and Borglum hired Luigi on the spot.

Luigi worked for Borglum throughout the 1920s on various projects. In 1933, Borglum hired Luigi to be the chief carver on Mount Rushmore.

What was your grandfather’s role as chief carver at Mount Rushmore?

Luigi was charged with carving the refinement of expression in the faces. Borglum did not allow any of the other carvers to refine any parts of the faces. When Luigi quit the work temporarily in 1935, all refining on the faces had to stop until he returned.

What did your family’s research at the Library of Congress involve?

Most of the work was done by my uncle Caesar Del Bianco. He insisted on doing it himself, and I helped whenever I was needed. Caesar and I made four separate trips to Washington in 1989, 1990, 1991 and 2006. Caesar made two separate trips on his own in 1992 and 1994. All I can say is that my uncle loved every minute of his time at the Library. He went through the Borglum Papers like a monk. He developed relationships with the staff, who were always ready and willing to help him. My uncle had a great respect for the Library and its ability to store so many valuable primary source documents. He felt so privileged to have access to “history.” Caesar always said that doing all those hours of research in the Library and discovering those documents was the “greatest moment of my life.” The documents, without a doubt, were crucial to the Park Service historians who read them and as a result recommended further recognition.

What evidence do the documents contain attesting to Luigi’s role?

Where do I begin? In Borglum’s many exchanges with the Mount Rushmore Commission, he defends and praises his chief carver. Here are some highlights: In a June 3, 1933, letter Borglum states, “[W]e could double our progress if we could have two like Bianco.” In a July 1935 letter, Borglum writes of Luigi, “He is worth any three men I could find in America, for this particular type of work.” In 1936, Borglum writes, “He is the only intelligent, efficient stone carver on the work who understands the language of the sculptor.” A 1936 report on progress at Mount Rushmore reads, “The plans for the remaining approximate two months of good weather are to finish completely the face of Washington with all refinements of expression; this work being in the hands of Mr. Borglum and the one stone carver on the work, Bianco.”

What happened after you presented your research findings?

In 1991, we sent our overwhelming evidence to Mount Rushmore and received the response, “Your grandfather was part of the team that carved Mount Rushmore. All the workers on the mountain will be credited equally.” That reflected the narrative maintained for many years: that 400 unemployed miners with no previous carving ability collectively carved the faces on Mount Rushmore. My uncle and I were shocked that the gentleman who operated the tram lift would get the same credit as my grandfather, who put the soul in the presidents’ eyes. In 2015, Cam Sholly, the new director of the National Park Services’ Midwest Region, did something no one before him was willing to do: Cam sent two of his top historians to review the documents from the Library of Congress. The historians were so impressed that they recommended a plaque for Luigi that very day.

What does the plaque recognizing your grandfather mean to your family?

It means so much. We are so proud of his accomplishment and only wanted him to get the credit he was due: no more, no less. To our family, justice has finally been served, and history is now telling a much more accurate story. My grandfather is a great representative of the immigrant who comes to America to live his dream. The American dream.