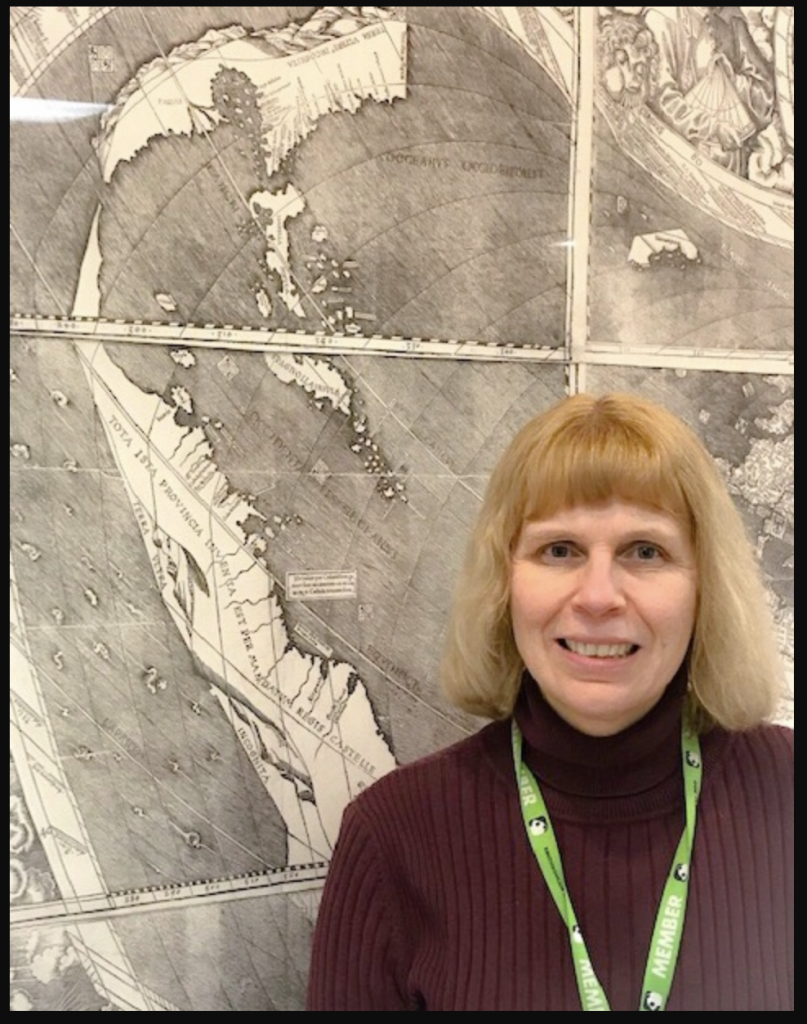 This is another guest post by Giselle Aviles, the 2019 Archaeological Research Associate in the Geography and Map Division.

The Geography and Map Division was created in 1897 and Paulette Hasier is the ninth person and first woman named chief of the division. Dr. Hasier is originally from Chicago. She has a joint Master’s Degree program in Library Science and a Master’s in History from the University of North Texas, and a doctorate in Transatlantic History from the University of Texas in Arlington. She’s worked in libraries for 24 years.

How did you get into the field?

My passion for maps goes back to my Ph.D. studies. When I met with my advisor, we talked about what we would like to do in terms of research, how we felt we could match what I do as a librarian with what I would do as an historian. We decided on a carto-bibliography of the central portion of the United States, specifically on (what was then called) Illinois Country.

Dr. Paulette Hasier, Chief of the Geography and Map Division at the Library of Congress in front of Waldseemuller’s 1507 World Map.

What intrigues you about maps?

The fact that there is a world of information contained on every map! For many years, maps were not seen as historical documents. I think the strength of a map as a primary source is always that it is a combination of factual and cultural information. I did research on comparative cartography of 16th and 17th century French maps, so as a student I worked with purely analog maps. Now, with Geographic Information Systems (GIS), you can use geospatial data, combined with these historical sources, to analyze boundaries, to spatially construct new histories. Therefore, I see the maps in our collection as the true world of big data.

Tell us about some of the career challenges that you’ve faced.

You give up a lot if you want to go far in academia, if you decide to pursue a Ph.D., and if you want to become an expert in your field. So one of the things I always think about is the challenge of tempering a family life and relationships with studying toward what you believe is a worthy career. It may sound silly, but you give up going to birthday parties, Fourth of July picnics, and of course there were times when I was getting only four or five hours of sleep per night. Like many people, while I was studying, I was working a full-time job, going to night school, coming home, doing readings, and going back to work the next day. I probably looked like a zombie! So I think you have to love what you do, you have to have a passion for what you do. For me, I am incredibly passionate about being a librarian.

That’s what the Library is all about! Can you tell us an anecdote about your work?

I had been working at the Library for about two weeks when I received an email from our communications office, saying that there were reporters coming to do a story for an online magazine. Part of the story required them to film in our vaults…so, on that day, the crew had me showing and moving globes around, talking about the collection, about having the biggest cartographic collection in the world. The next day, they needed to do some additional filming, but I was not available. My stand in was Mike Buscher, who was the head of the reading room at the time. The crew filmed him opening some of the hundreds of map drawers we have in the division and taking maps and folders out. In the final cut, they show me talking about the globes and maps — but it’s Mike’s hands taking the objects out of the drawers! 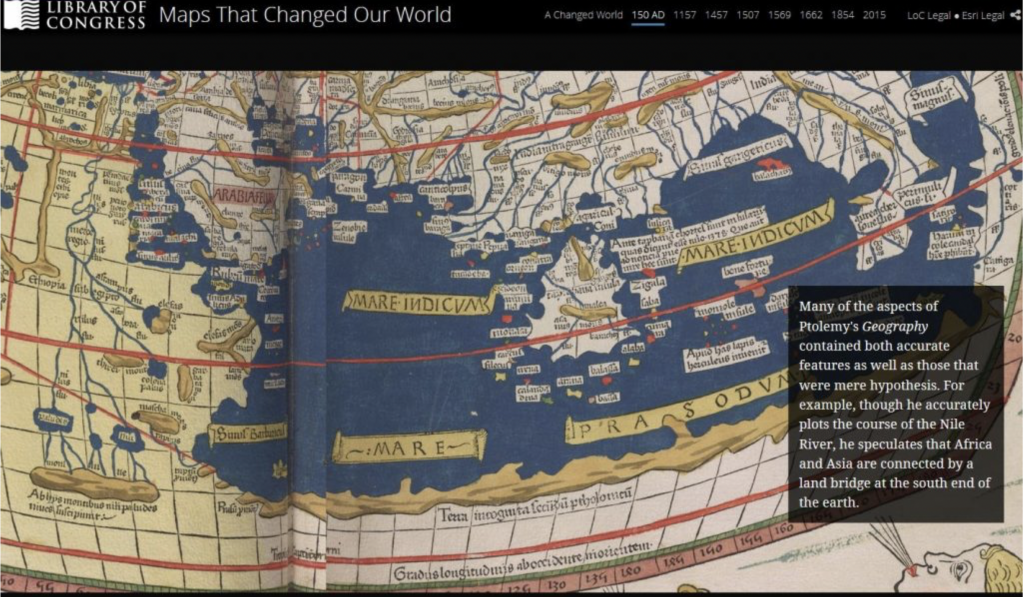 Part of the Story Map, Maps That Changed Our World. Geography and Map Division, Library of Congress.

What accomplishments have you and your team achieved?

Our Story Maps, I feel, have been an incredible accomplishment. We received so much support from our IT department, helping with the software and back end programming and engineering issues; from our subject-matter experts throughout the library who provided content; and my staff, doing briefings, writing policy, teaching the platform, and creating something that I believe will have some longevity. I feel this has been kind of a high point of my career here. We wanted to do something that was going to go beyond geography and maps in their traditional formats and be something that would become a part of the culture of the library. We are trying to get people to understand how they can take that expertise and put it out there for anyone, not just the folks who happen to be at the library. 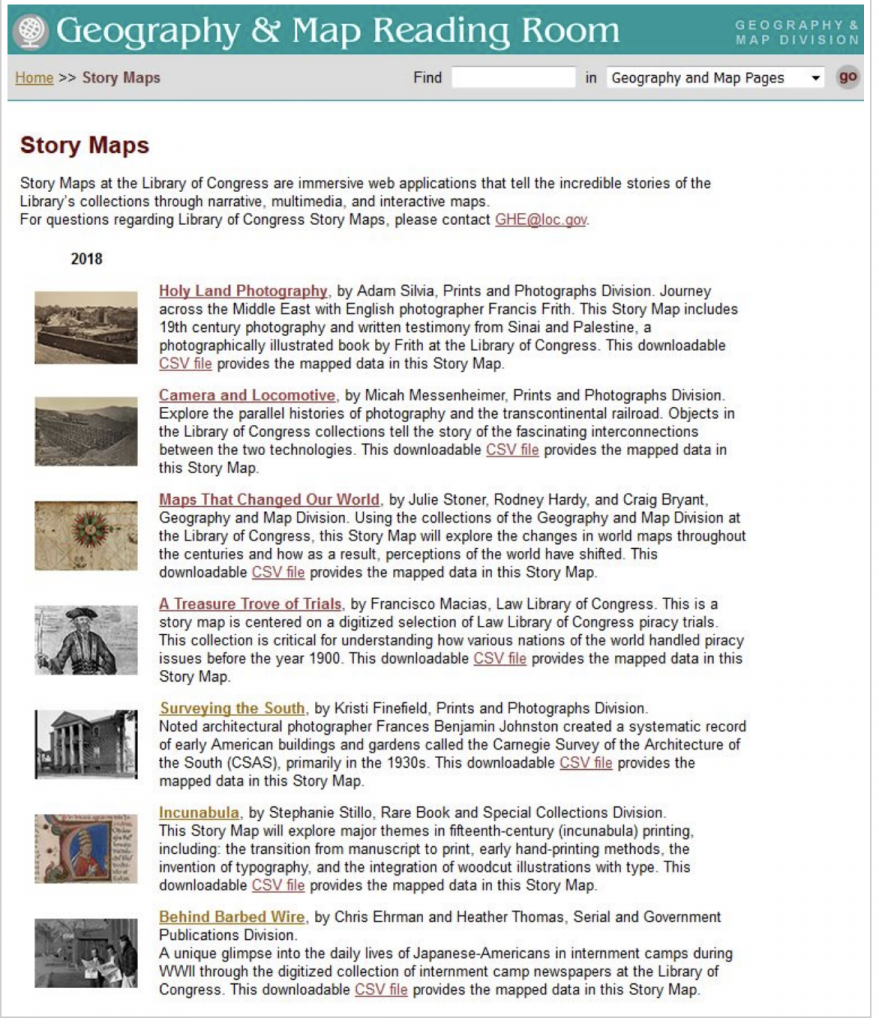 How do you feel about being the first woman named Chief of the Geography and Map Division?

That’s interesting, because I didn’t see it that way when I first arrived. It was people from the outside who really brought it to my attention. I had to think about it for a second because I thought, that’s a heavy burden to take on. Doing my actual job, however, I see as gender-neutral. The fact that I’m actually being put up as an inspiration, as a change maker…takes me back to knowing your passion. It’s important to do things that will make you happy in your career. Don’t let anyone or any institution tell you that you can’t do it. It is not about being the first woman — it’s about being a woman and being impassioned about what you do and rising to the occasion of being the first.