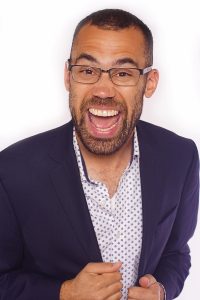 Teachers and filmmakers have long relied on primary sources to make history come alive. Ben West, director, performer and musical theater historian, is also drawn to them—but with a novel purpose. He is using unpublished manuscripts, papers of Broadway authors, copyright records and more to tell the story of the American musical—through a musical.

His production, “Show Time! The First 100 Years of the American Musical,” blends live music, performance and narrative to explore the way musicals evolved from the mid-1800s through 1999 alongside social and artistic changes. To develop the show, West visited more than 20 archives in states across the country, including the Library of Congress, whose collections he began consulting in 2009.

West’s directing credits include “Unsung Carolyn Leigh” for Lincoln Center’s American Songbook; “Gatsby: The Songs in Concert”; “Make Mine Manhattan”; and “The Fig Leaves Are Falling.” On Broadway, he was assistant director and dramaturg for “Old Acquaintance”; assistant producer for “August: Osage County” and “The Homecoming”; and production assistant for “Talk Radio.” Lincoln Center for the Performing Arts recognized West in 2017 with its Martin E. Segal Award for emerging artists.

“Show Time!” will premiere at the Theatre at Saint Peter’s in New York on September 13. Two companion pieces will follow in 2019 and 2020: “45 Minutes from Coontown,” a celebration of black musical theater, and “68 Ways to Go,” about women writers of musical theater.

Here West answers a few questions about his research at the Library.

Why do you want to tell the story of the American musical?
I am madly in love with the musical theater—the excitement, the energy, the brashness, the ferocity, the intellectualism, the humanity, the endless possibilities. The American musical is, at its best, an unstoppable force of audacious entertainment, to borrow a line from “Show Time!” And yet its story is largely unsung. As one who is deeply passionate about this indelible form and the kinetic relationship between past, present and future, I find the relative silence deafening, especially when you consider that its story is also our story. We are speaking here about a uniquely American art form whose works—together with their respective authors—capture the consciousness of a nation, revealing who we are as a people, and embody the social, political and cultural climate of any given time. Its history is our history. Its future is likewise ours. Its story needs to be told. “Show Time!” indeed sets out to do just that and, with any luck, will itself prove to be an unstoppable force of audacious entertainment. 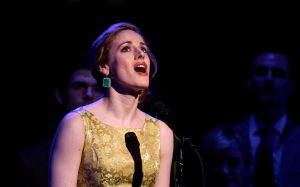 Which Library of Congress collections have you used?
Simply put: several. With regard to the Manuscript Division, the Library’s copyright deposits of unpublished dramatic works have been my primary target, leading me to several librettos, including Clare Kummer’s “Noah’s Ark” (1905) and Arnold B. Horwitt’s “O Happy Me!” (1955). In Recorded Sound, I have recently been investigating early 20th-century black spirituals, and previously accessed the NBC Collection for its exhilarating radio broadcast of Harold Rome’s hit 1943 army revue, “Stars and Gripes.” But it is the absurdly majestic Music Division that has been my most frequent destination, housing the personal papers of—among many others—Irving Berlin, Leonard Bernstein, Vernon Duke, George and Ira Gershwin, Morton Gould, Jerome Kern and Arthur Schwartz, all of which I have investigated, all of which are a feast. Elsewhere in the Music Division, the vast and vibrant Warner Chappell Collection has proven essential, as have the similarly vast and vibrant published sheet music collections, covering stage, screen and popular song.

Which holdings have you found especially compelling or surprising?
Truth be told, there is hardly a collection that I do not find compelling. That said, the most surprising—shocking, startling, unexpected—of the Library’s holdings is undoubtedly its copyright deposits of unpublished musical works. The vitality, import and singularity of this remarkable resource cannot be overstated, especially considering it actively preserves the overwhelming majority of unpublished lyrics and music submitted for U.S. copyright before 1978. For the Bernsteins and Gershwins of the world, this is likely of little consequence. Most of their output is safely tucked away in their personal papers. But for the many older or lesser-known artists who do not have dedicated collections, these copyright deposits are invaluable. I have quite literally burst into ecstatic fits of giddiness upon finding forgotten scores for which I had been feverishly burning: Henry Creamer and Turner Layton’s “Ebony Nights” (1921); Louis Douglass and James P. Johnson’s “The Policy Kings” (1938); Ogden Nash and Vernon Duke’s “He and She” (1949); Charles Gaynor’s “Show Girl” (1961). Beyond the musical material related to specific shows, the copyright deposits have also proven a tremendous tool for exploring the outermost appendages of an artist’s body of work, with Henry Creamer, Sammy Fain, James F. Hanley, Arnold B. Horwitt, James P. Johnson, Carolyn Leigh and Harold Rome being just a few of the individual subjects into whose deposits I have delved. And it is true that my copyright journey has been primarily in search of items that, generally speaking, are obscure. But, when addressing the evolution of the American musical, these items are also significant, central and revealing.

Have you produced original material you discovered at the Library?
In 1969, Hugh Wheeler (“Sweeney Todd”), Carolyn Leigh (“Little Me”), and Lee Pockriss (“Catch a Falling Star”) wrote an unproduced musical adaptation of F. Scott Fitzgerald’s “The Great Gatsby.” While Leigh’s collection at the New York Public Library for the Performing Arts includes several drafts of the libretto, only two songs are represented. (They wrote more than 20.) Upon learning that several of the charts had been submitted for copyright, however, I was able to locate the deposits at the Library of Congress with the help of Music Division reference specialist Cait Miller. While the world will likely never see the full treatment of this particular “Gatsby” musical due to rights issues affecting the underlying source material, its sensational score—set apart from the libretto and the story—is eminently performable. As such, I decided to adapt 16 of the songs, including a handful given to me by Lee and Sonja Pockriss, into a “Gatsby” song cycle. (Fran Minarik created the fresh and fabulous musical and vocal arrangements from the original lead sheets.) “Gatsby: The Songs in Concert” was first performed in a world premiere concert in 2011, and then again in 2014 alongside individual items from the unproduced musicals “Caesar’s Wife,” “Juliet,” and “Smile” as part of “Unsung Carolyn Leigh,” an evening I had the pleasure of creating for Lincoln Center’s American Songbook.

How has it been for you to work at the Library and with Library staff?
Conducting research at the Library is always a joy, and the positive experience is only amplified by the supportive staff. Patrick Kerwin in the Manuscript Division, Chamisa Redmond Nash in Photo Duplication, Eric Frazier in Rare Books, and Harrison Behl in Recorded Sound are just a few of the extraordinary individuals who have helped me immeasurably along the way. The extent of my research here would also not have been possible without the kindness, generosity and knowledge of the entire team in the Music Division, with a special mention of Mark Horowitz, who has inspired, challenged, engaged, shocked, excited and befriended me over and throughout the past eight years. To quote one of the Library’s famed artists in residence, “Who could ask for anything more?”