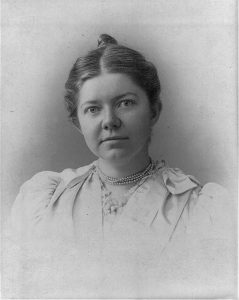 This year marks the 150th anniversary of the birth of Amy Beach (1867–1944), whose musical accomplishments changed the way Americans understood the possibilities for women in music.

Born in New Hampshire to a prominent New England family, Beach was a child prodigy: by age four, she was composing simple waltzes; at seven, she began giving public recitals, playing works by Beethoven, Chopin and Handel; in 1885, she appeared as a piano soloist with the Boston Symphony Orchestra.

As a composer, her breakthrough came in 1896, when the Boston Symphony premiered her “Gaelic” symphony to almost unanimous praise—all the more remarkable because she was largely self-taught as a composer. In all, she composed more than 150 works; beyond the “Gaelic” symphony, she wrote “Mass in E Flat Major” (1892), a violin sonata, a piano concerto and quintet, choral and chamber music pieces and the opera “Cahildo” (1932).

Despite her success, Beach is not well known today outside scholarly and musical circles in the way many of her male counterparts are. Indeed, the New York Times reported in the fall that no major American orchestras had plans to perform her works for the 150th anniversary.

Caitlin Miller of the Music Division is doing her part to change this situation. Last month, she gave a lecture at the Library about Beach, including an up-close look at some of Beach’s work held at the Library. Miller’s lecture was followed by a performance of Beach’s work in the Coolidge Auditorium. Here Miller answers a few questions about this important composer and the special items in the collections related to her. 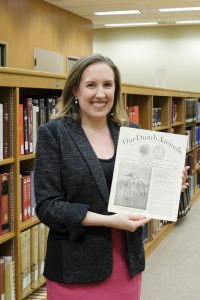 Caitlin Miller, a reference specialist in the Music Division, has highlighted the work of composer Amy Beach this year. Here she holds a copy of an 1893 newsletter that includes one of Beach’s songs. Photo by Shawn Miller.

When and why did the Library begin collecting Beach’s works?
The Library first collected Beach’s published music through the copyright deposit program, starting with her first published song, “The Rainy Day,” from 1883 when she was 16. Beach’s main publisher was Arthur P. Schmidt, a German émigré who settled in Boston and started a company that published works of many distinguished American composers; in fact, the A.P. Schmidt Company became one of the largest music publishing and importing firms in the United States. The Library of Congress acquired the Arthur P. Schmidt Company Archives during the latter half of the 20th century, a collection that includes music manuscripts, correspondence and selected business and financial records from the company. As a result, we have substantial correspondence from Beach as well as music manuscripts for her works, a portion of which are in the composer’s hand.

Also, in the early decades of the 20th century, the Music Division’s first chief, Oscar Sonneck, reached out to Beach after discovering that we did not hold a copy of her piano concerto in our collections. We hold a typewritten letter dated January 7, 1911, from Sonneck to Beach where he states, “It seems a pity that our catalogue should contain so many scores of pianoforte concertos by European composers and not yours, which easily holds its own against so many works that have been published in Europe of late years.” Sonneck’s letter demonstrates the respect that the musical world held for Beach and her work.

We hold her response to Sonneck as well, handwritten on stationery outlined in black (she was mourning the death of her husband who had passed only about half a year prior to her writing the letter). Beach begins a conversation about the whereabouts of her manuscript for the piano concerto that eventually led to the Library acquiring a copyist’s manuscript of the score; however, this letter also voices her willingness to donate other music manuscripts to the Library’s music collections. Beach writes, “I take great pleasure in sending to you by express the original manuscript of the entire “Service in A” . . . for voices and organ, for deposit in the Library of Congress. I shall be glad to know that the score of one of my most important works rests in so honorable a place.” This score was the first of several music manuscripts that Beach happily gifted to the Library of Congress for safekeeping, including titles such as “Jeptha’s Daughter,” “Sea-fairies,” “Sylvania (A Wedding Cantata),” “Help Us, O God!” and others.

What inspires your interest in Beach?
Since I began studying music history, I have been drawn to studying and sharing stories about women in music. Beach was the first American composer to publish a symphony, and her “Gaelic Symphony” was premiered by the Boston Symphony Orchestra—that fact alone is remarkable to anyone interested in women’s historical milestones. But upon reading Adrienne Fried Block’s fabulous biography of the composer, I was fascinated to learn that Beach’s education in music theory and composition was significantly limited compared to that of her male contemporaries. Beach was largely encouraged to study the old masterworks independently and teach herself—no residences in Europe to receive formal composition classes (she traveled to Europe later in her career, but not to receive formal training). To understand her achievements, one must explore her upbringing, her education, her marriage, her philosophies and the politics at play in the Boston musical community and in the world.

In honor of Beach’s 150th birthday, I wanted to organize a talk and display that would highlight her tremendous career, demand the attention of general music enthusiasts and encourage some thoughtful reflection on Beach and her works—and maybe even lure some researchers in the Performing Arts Reading Room!

Do you have a favorite item that you included in the display?
I tried to represent as many aspects of Beach’s career and compositional output as I could last month. I included her first published songs (“The Rainy Day” and “With Violets”) as well as her most popular songs (“The Year’s at the Spring” and “Ah, Love, but a day!”), the manuscript copy of her “Gaelic Symphony” from the Schmidt Archive, the Boston Symphony Orchestra program featuring the symphony’s premiere, scores for choral works in Beach’s hand, articles that she authored about music education, articles that sought her opinion on trends in music and more.

Of course, I’m always excited by the quirky and unexpected, so my favorite item that I included in the display would have to be a song of Beach’s that was published in a newsletter called “Our Dumb Animals,” printed in 1893 by the Massachusetts Society for the Prevention of Cruelty to Animals. Beach’s song “Golden Gates” is printed on page 95 along with text celebrating “our good friend Mrs. Dr. Beach” for having composed “the first Mass ever written by a woman.” The text also explains why Beach’s song is printed in the newsletter: “Some time since she saw in ‘Our Dumb Animals’ a beautiful little poem, which so struck her that she has set it to music, and by her kind permission we have the pleasure of presenting it as above to our readers.” I love this item for a few reasons—first of all, it’s a fascinating newsletter in and of itself, but it also sheds light on Beach’s inspiration for this particular song and communicates a general interest in animal rights.

What would you suggest to researchers thinking about using the Library’s collections on Beach?
There is so much Beach material to discover in the Music Division’s collections! Between our published scores, the music manuscripts that Beach gifted to the division, correspondence we received and preserved in the division’s old correspondence files, music manuscripts and correspondence in the A.P. Schmidt Archive as well as correspondence found in other special collections, including the Elizabeth Sprague Coolidge Foundation Collection and the Edward and Marian MacDowell Collection. In addition to our material, any Beach researchers should also know that the University of New Hampshire holds the Amy Cheney Beach (Mrs. H.H.A. Beach) Papers 1835–1956 and the University of Missouri-Kansas City holds an Amy Cheney Beach Collection as well.

My strongest suggestion, of course, would be to visit the Performing Arts Reading Room to view some of our material in person and talk to me or another of our reference librarians about the collections. And don’t hesitate to email us your questions via Ask A Librarian!