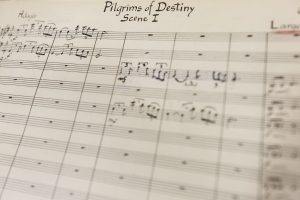 An excerpt in Gena Branscombe’s writing from her original “Pilgrims of Destiny” manuscript, held in the Library’s Music Division.

Mezzo-soprano Kathleen Shimeta stumbled upon Gena Branscombe (1881–1977) in the late 1990s when Shimeta was planning a Valentine’s Day recital. Branscombe, it turned out, had set to music Elizabeth Barrett Browning’s famous sonnet beginning “How do I love thee? Let me count the ways.” Delighted by the composition, Shimeta wanted to know more — including why she had never heard of Branscombe.

Thanks to a couple of decades of research since then, Shimeta is now an expert on the pioneering woman composer and choral director whose impressive body of work fell from public view in the years after World War II. Recently, Shimeta spent long hours studying handwritten scores and vocal parts held by the Library’s Music Division to help reconstruct a choral drama, “Pilgrims of Destiny,” Branscombe wrote 100 years ago this year. It was performed this spring by a choir of 100 at Clark University.

Tells a little about Gena Branscombe.
Gena Branscombe was a champion of American music. She composed art songs, piano works, chamber music, choral and instrumental pieces and a dramatic oratorio.

She studied and taught at the Chicago Musical College and at Whitman Conservatory in Walla Walla, Washington. She spent one year intensively studying piano with the Swiss-American pianist Rudolf Ganz, and she studied composition with Englebert Humperdinck in Germany.

At age 40, Branscombe began conducting. She was conductor of the MacDowell Chorale in Mountain Lakes, New Jersey — affiliated with the MacDowell Colony, the artists’ retreat in Peterborough, New Hampshire — and she guest conducted choirs for women’s clubs and colleges. She also founded her own Branscombe Chorale whose members came from New Jersey, New York City and Connecticut. 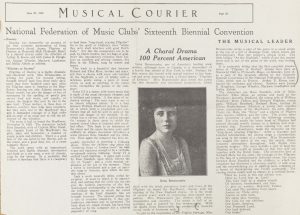 The June 22, 1929, issue of the Musical Courier reviewed the premiere of “Pilgrims of Destiny,” which had taken place a few days earlier in Plymouth, Massachusetts. It features a photograph of Branscombe. “Without doubt,” the review reads, “Gena Branscombe has produced an America[n] choral work of foremost rank.”

Why did you want to reintroduce Branscombe to the world?
After discovering Branscombe’s art songs, I came to understand the era in which she composed. She was a successful woman composer during a time when woman composers were considered insignificant. Her songs are complex, have melodies that sing themselves and difficult piano accompaniments.

How did the Library acquire “Pilgrims of Destiny”?
The Library solicited Branscombe’s original orchestral score and orchestra parts for “Pilgrims” in 1960. The work had garnered the best-composition award from the National League of American Pen Women in 1928 and recognition from the Daughters of the American Revolution. The story takes place on the Mayflower as it sailed toward America in November 1620. The pilgrims are in despair, homesick, yet hopeful that their new country will appear on the horizon. Reconstruction of the orchestral score was necessary because the only complete hand-inscribed score is in fragile condition. We compared the Library’s score with the pencil workings of “Pilgrims” held at the New York Public Library. 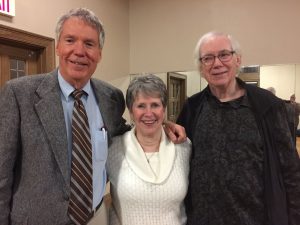 Kathleen Shimeta with two of Branscombe’s grandsons, Morgan Scott Phenix (left) and Roger Branscombe Phenix (right), on April 27, the day the reconstructed “Pilgrims of Destiny” was performed at Clark University.

How did your Branscombe research inform your understanding of the piece?
At the time Branscombe composed “Pilgrims,” her personal life had been shattered by the death of her 3-year-old daughter, Betty. In the depths of grief, she began composing this work.Her mourning and life are woven into her oratorio. Her faith in God as a healing force helped her overcome the tragic death of her daughter. There is a comforting, sweet lullaby and at another time an outburst by a mother who will never see her child again. Her harmonies are of a thick rich texture with key changes abounding as the sea unleashes its fury. The work concludes with a chorus of thankful jubilation to God.

Why do you think Branscombe was forgotten?
By the 1950s, Branscombe and her women-composer colleagues had become old-fashioned. Beautiful melodies were passé, while 12-tone and atonal music had become the fashion. In 1955, Branscombe’s music publisher notified her that her early music and her choral piece “Coventry’s Choir,” commemorating the bombing of Coventry Cathedral in World War II, had been destroyed. The probable cause was America’s economic recession at the time.

You’ve performed Branscombe’s work at the Library. Tell us about that.
For the Library’s celebration of the 100th anniversary of the MacDowell Colony, I was invited to perform in a recital featuring women composers of the colony, including Branscombe. She had twice been at the colony, written an article about its 50th anniversary and been a conductor for a MacDowell Chorale. Display cases in the lobby held pictures, music and letters of the three composers featured on the program. That day, my work on Branscombe’s music and life, my performing of her songs, the MacDowell Colony and the display items came together in one special moment.