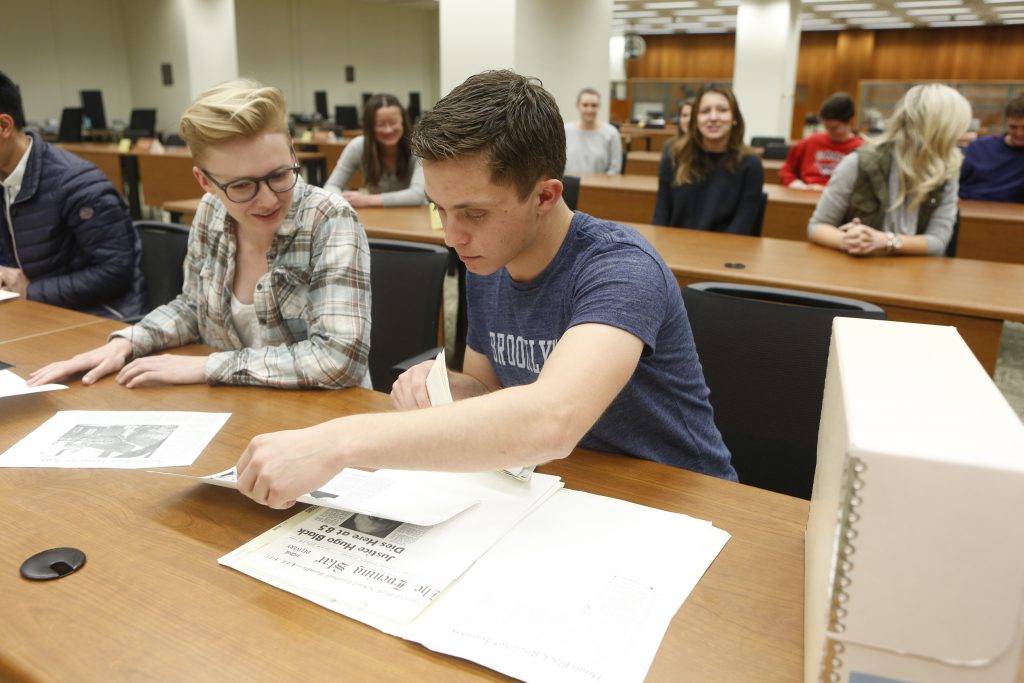 Many college students head for the beach or perhaps to a city with a lively night life for spring break. The students in Joe Kobylka’s honors seminar on the Supreme Court had a strikingly different kind of destination this year: the Library of Congress. The students traveled from Southern Methodist University in Dallas to spend the week of March 13 in the Manuscript Division examining the papers of Supreme Court justices to respond to a research question that Kobylka, a professor of political science, helped each of them develop. Here Greg Guggenmos, a sophomore majoring in statistical sciences and minoring in computer science and history, answers a few questions about his experience.

What is your research topic?

I’m doing my research on the development of the clear and present danger test from the time of Justice Holmes to the late Warren court. It is one of the main tools the justices use to protect free speech—it defines the circumstances under which limits can be placed on the First Amendment.

Whose papers did you consult for your research?

What was it like to view and handle original documents?

The Library of Congress makes it easy to get up close and experience some of the most monumental moments our country has seen. From day one, we got to hold and touch the physical writing of people who had always just been names in a textbook. It was incredible to be able to step away from the sometimes-stuffy opinions of nearly 80 years ago and see firsthand how the justices interacted with one another. They joked, took offense and tossed ideas back and forth. It humanized history in a way that is challenging to explain.

Did you find material helpful to your research?

The papers are a crucial part of my research. It’s nearly impossible to see how and why the justices came to the conclusions stated in the official opinion of the court without digging through the personal letters and memos between justices. The papers available in the Library of Congress enriched my understanding of how the clear and present danger test developed and provided insight into the reasoning of the justices.

Did you encounter any documents you found surprising?

While roaming around the First Amendment cases of Justice Robert Jackson, I stumbled over an exchange of letters between Jackson and Arthur Schlesinger, who was then a Harvard history professor. The two men were discussing Jackson’s recent analysis of the tactics of the Communist Party during coups in other countries and how those same tactics were likely to be applied in the United States. Here’s the crazy thing: the ideas they were bouncing back and forth would become important parts of Schlesinger’s position on communism 20 years later when he advised John Kennedy and Richard Nixon. I’d seen those ideas, and even the same rhetoric, in speeches from the Kennedy years and beyond. History came to life before my eyes. I saw how simple letters between friends influenced American policy for decades to come.

What was your experience like generally at the Library of Congress?

Growing up, I would often escape outdoors—sometimes recruiting friends—to re-enact various battles, speeches and great moments from American history. It was these backyard escapades that kick-started my love for learning. During my week at the Library, I felt as if things came full circle. Schlesinger’s letters are just one example of many fascinating exchanges and remarkable moments of history I encountered. Letters from Roosevelt, Churchill and other world leaders passed through my hands. I came with a group of students from Southern Methodist University. Together, we uncovered top-secret documents from the FBI, conference notes from cases like Brown v. Board of Education and even a translation of a major case into Japanese! It was an amazing experience to dive into the history stored in the Library of Congress.