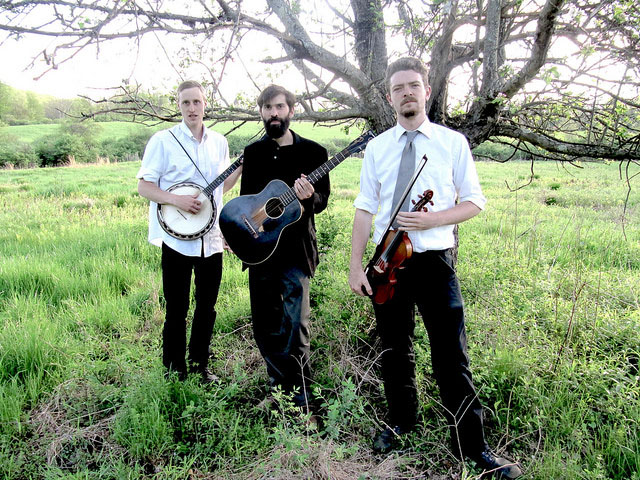 An earlier version of this interview, conducted by John Fenn of the American Folklife Center, was published on “Folklife Today,” the center’s blog.

Eli Smith (center) with his band, the Down Hill Strugglers. Photo by M. Smith.

A little over a decade ago, Brooklyn-based musician and promoter Eli Smith merged his passion for folk music with the inspiration he gets from fellow New York City artists and created the Brooklyn Folk Festival. Since then, Smith has engaged the Library’s American Folklife Center in numerous ways, doing research into the history of folk music, learning songs from the collections and brainstorming with staff on ways to excite interest in the center’s holdings. Here Smith answers questions from John Fenn of the AFC about the festival and collaborating with the Folklife Center.

Tell me about your relationship to folk and traditional music.

I became interested when I was a teenager, growing up in Greenwich Village. I heard recordings of Woody Guthrie and Mississippi John Hurt, as well as the New Lost City Ramblers. I read the liner notes and followed their sources. Smithsonian Folkways reissued the Harry Smith Anthology when I was in high school, and I got that. It was a revelation for me. When I heard that range of music—it was completely unlike anything I had heard before!

These were the kind of sounds that I’d been searching or hoping for, without even knowing it. Also the Deep River of Song series of Lomax recordings was being issued back then on CD, and those were also a revelation to me, along with the amazing reissues of music of old 78s on the Yazoo label.

I followed the music, listening as much as I could, learning about the musicians and the styles and sounds. I learned how to play the guitar, banjo and harmonica; some mandolin and fiddle; other instruments. Exploring the history of the music in my own neighborhood, going back into the 1960s but even earlier—the 1950s, 1940s, 1930s—and connecting with older generations of musicians and cultural workers was important for me. They played the music themselves, but were also devoted to presenting it and perpetuating the music by, among other things, bringing it to audiences and issuing recordings.

What inspired you to launch the festival?

There was such a good scene of musicians in New York City when I first thought of the festival in 2008 (and now) that I felt we needed a yearly festival to properly present the music. I wanted these wonderful musicians, who I felt were not receiving their due, to have an opportunity to play for a large audience and to help spread awareness and understanding about the music. I also felt, and still feel, that most music festivals that are calling themselves “folk” festivals are not presenting a true range of “folk” music. Most folk festivals are actually singer-songwriter/indie rock festivals. It’s false advertising! I wanted a folk festival that was more in line with the early Newport Folk Festivals or University of Chicago Folk Festivals from back in the early 1960s. By that I mean I wanted to present a folk festival that was really counter cultural—folk music being a cornerstone of the American counter culture—and a festival that really represented the huge diversity and deep roots inherent in the idea of folk music. We have made that our goal at the Brooklyn Folk Festival.

What surprises you most about the festival, 10 years on?

I’m somewhat surprised that we managed to keep the festival going for 10 years. That’s a long stretch, especially for an event in New York, where things can be pretty tough. But I have to say, the time has flown by! The festival remains vibrant and we intend to keep it going.

I produce the festival with the Jalopy Theatre and School of Music, which is the home for folk and traditional music in New York City today. The first two years, the festival was at the Jalopy, but it outgrew our small space. We have moved to successively larger venues, and are now at St. Ann’s Church, a beautiful Gothic cathedral-type building in Brooklyn Heights. This space has allowed the festival to expand: two stages, an area for dances and workshops, film screenings and, new this year, the first-ever Brooklyn Fiddle Contest.

Tell us about the Archives Roadshow.

The collections at the AFC are so amazing and inspiring to me and my friends in our music scene here in New York. But they could, of course, be better known by the public.

Through conversations with Nancy Groce and Todd Harvey of the AFC, we established this idea of making a visual display that could be easily transported to different venues, combined with a touring group of musicians, whose work has been profoundly influenced by the collections at the AFC. These musicians would play pieces they had learned from the AFC’s collections, and speak about the recordings, their history and their own relationship to them.

We wanted to bring the music directly to audiences, live and in person! The idea was to make it exciting, immediate and relatable to people, and hopefully inspire them to visit the AFC in person. Or, at the very least, look at the online collections.

What other connections do you have to the AFC?

I have done research at the AFC, for my own edification and knowledge as a musician, but also to compile and release on the Jalopy Records label the album “Lost Train Blues: John and Alan Lomax and the Early Folk Music Collections at the Library of Congress.” Everyone at the AFC is so great, welcoming and knowledgeable when I come to do research.

What is your favorite discovery from the AFC archives?

That’s hard to answer. I loved hearing more of Jess Morris’ playing, the great Texas fiddler. I really enjoyed hearing everything he recorded with John Lomax back in 1942 (listen to an example below). I have also loved exploring recordings that Sidney Robertson Cowell made, or Willard Rhodes’ recordings of, for example, Cherokee Christian hymns. Also hearing the Gant Family was amazing. And Jesse Wadley’s recordings. But there’s so, so much! It’s crazy.