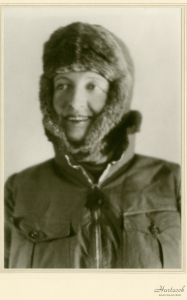 Louise Arner Boyd was born in 1887 to wealth. Her father was a mining magnate who made millions in California’s Gold Rush; her mother came from one of New York’s distinguished families. Louise grew up in San Rafael, California, and San Francisco immersed in the activities of her milieu: horseback riding, hunting, socializing, charitable endeavors.

When, still in her early thirties, she inherited her family’s fortune, she continued on as a philanthropist and a society woman—in 1925, she was presented at court to King George V and Queen Mary of England. Behind the scenes, however, she started to build a second life—as a rugged polar explorer. Between 1926 and 1955, Boyd financed, organized and photographically documented seven Arctic expeditions, achieving international notoriety for her work. But over ensuing decades, memory of her achievements faded; she died in 1972, having spent her entire fortune on exploration. Today, she is nearly unknown.

In “The Polar Adventures of a Rich American Dame: A Life of Louise Arner Boyd,” Canadian scholar Joanna Kafarowski aims to set the record straight. She traveled to libraries and archives in Canada, Europe and the United States, including the Library of Congress, to write a comprehensive biography of Boyd’s life and accomplishments, published in November 2017.

Here Kafarowski discusses her passion for Boyd and her research at the Library.

What drew you to the story of Louise Arner Boyd?
I was conducting fieldwork in Arctic Canada for my doctorate on gender, decision-making and environmental contaminants. In my spare time, I read about polar exploration and was intrigued by the mention of “Louise Arner Boyd,” a spirited American woman who had led expeditions to Greenland in the early 20th century. After I returned home, I tried to find out more about her but discovered that no biography existed. A chance family vacation to California took me to the Marin History Museum in San Rafael, which holds many Boyd documents and artifacts. She stayed in the back of my mind for a number of months; when I couldn’t ignore her voice any longer, I decided that the person who needed to write her biography was me. 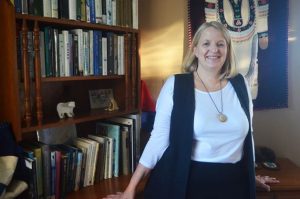 Tell us a little about how Boyd came to be an artic explorer.
Growing up in sun-kissed California, Boyd never saw ice and snow until she was an adult. As a child, she was a voracious reader and loved tales about daring polar explorers. She grew up learning about the tragic American explorer George Washington De Long on the ill-fated 1879 Jeannette expedition and the sensational rumors of cannibalism during the tragic Greely expedition of the early 1880s. Later, she was riveted by the controversy over who had conquered the North Pole—Robert Peary or Frederick Cook—that gripped the nation and the world.

After inheriting her family’s fortune, she hired a ship and traveled north of the Arctic Circle, where she developed a passion for the North. Following two pleasure cruises in 1924 and 1926, she hired another ship in 1928 and prepared to sail north once again. Shortly before her departure, she was stunned by the news that iconic Norwegian explorer Roald Amundsen had gone missing. She immediately put her hired ship, its crew and provisions and her own services at the disposal of the Norwegian government. In doing so, she joined a hazardous and ultimately unsuccessful international rescue mission that involved over 15 ships from many European nations. There was no looking back for Boyd after this expedition.

What are some of the highlights of Boyd’s accomplishments as an explorer?
Scientific work during her seven expeditions generated a vast body of data on East and West Greenland, Norway’s Jan Mayen Land and Russia’s Franz Josef Land in the fields of geology, geomorphology, oceanography, botany and glaciology. This work is still cited by contemporary scientists. Apart from organizing, financing and leading the expeditions, Boyd was also the photographer and produced thousands of detailed photographs and cinematic films that were used to produce maps of this remote region. She pioneered the use of the photogrammetrical equipment employed in exploratory survey work to make measurements from photographs; assisted in the development of a new deep-water recording echo-sounder used to measure ocean depths; discovered a new underwater bank between Jan Mayen Land and Bjǿrnǿya in the Barents Sea that became known as Louise A. Boyd Bank; identified a new geographical connection between the Jaette and the De Geer glaciers in East Greenland that was later known as Miss Boyd Land; and discovered dozens of botanical species previously unknown to science. Later, she was recognized as a Greenland expert and worked for American military intelligence during World War II. Thanks to these accomplishments, Boyd became a role model for other enterprising women explorers who came after her.

What research finds did you discover at the Library of Congress?
Because it is such an important repository, I visited the Library early in my research. I discovered an original head-and-shoulders portrait of Boyd taken by Pacific and Atlantic Photos, Inc. This was significant as it is dated 1928—the year that altered the trajectory of her life. Boyd’s steely determination is mirrored in this wonderful black-and-white portrait. Unfortunately, I was not able to definitively trace the copyright to it, so could not use it in my book. But it started me off on the right path.

Another find was the only recording of her voice I was able to locate during 10 years of research. Boyd spoke on many radio programs, but this is the only extant audio recording. It is part of the marvelous Joseph Nathan Kane Collection, 1938–1939, consisting of recordings of the radio program “Famous First Facts.” By the time Boyd was interviewed on this program, she was a seasoned explorer. I must say her voice did not sound as I expected it to, but it certainly gave dimension to my ongoing work.

Why do you think Boyd was forgotten?
There are several reasons. Although she was lauded by her male peers and showered with honors and awards from around the world, she was entirely self-financed and, in fact, spent her entire fortune in the cause of exploration. This meant that she was not required to undertake aggressive self-promotional tours touting her accomplishments in order to raise funds. Male explorers including Peary, Amundsen, Ernest Henry Shackleton and Vilhjalmur Stefansson criss-crossed their countries publicizing their accomplishments, and all of them wrote sensational accounts of their adventures. They needed cold hard cash and the attention of an adoring public who would await their next journey with bated breath. Boyd gave lectures at universities and geographical societies and wrote scientific books. Although there is evidence that she started writing a popular book, it was not completed, so she never generated the same media frenzy or garnered the public attention that her male counterparts did.

Secondly, the reputation of an explorer is based on accomplishments. While what we know about Boyd is sufficient to ensure her stellar reputation, there is much that remains hidden from us. Despite the fact that there is documented proof that she produced thousands upon thousands of films and photographs of the Greenland regions, only a small percentage of this valuable archive has ever been located. In addition, her personal logbooks and journals from each of her seven expeditions from 1926 to 1941 are missing. Until this valuable archive comes to light, we are unable to accurately assess her true contributions as an explorer.

Lastly, Boyd never married or had children. She was the last remaining survivor of her immediate family and thus had no descendants to champion her cause as Marie Peary Stafford did for Robert Peary or Helene Cook Vetter did for her father, Frederick Cook.

Can you comment on your experience working at the Library?
I had a splendid time! On a personal basis, the Library is a mecca for bibliophiles such as myself. As a writer, I could not have experienced more professional or helpful service.