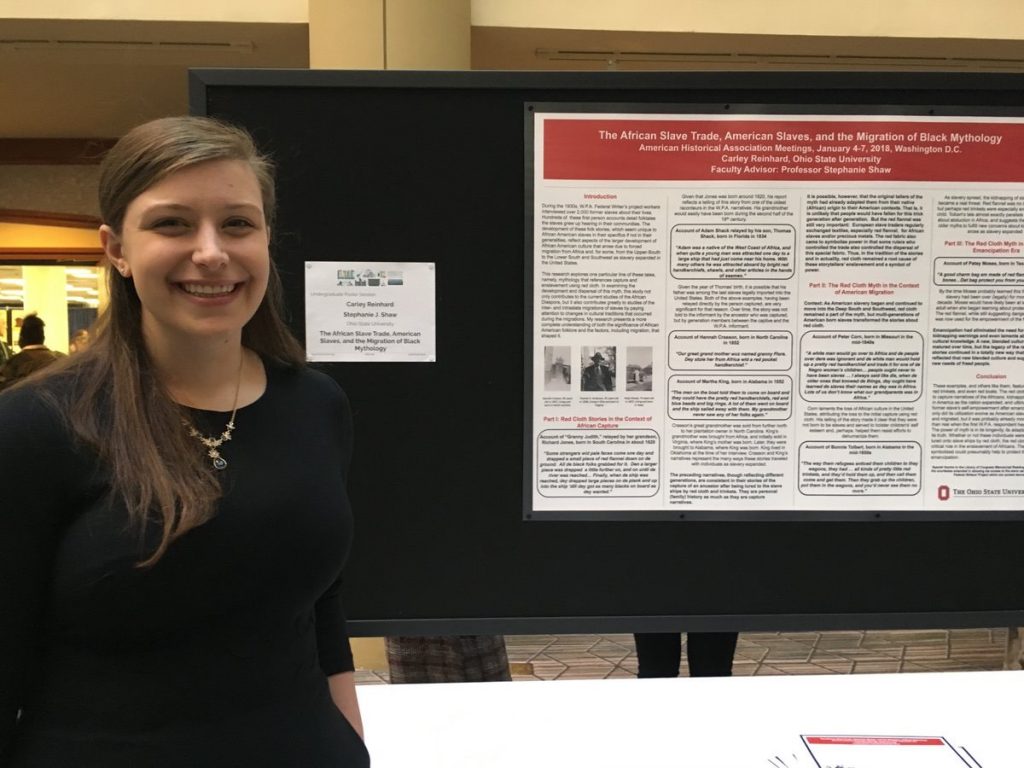 Ohio State University undergraduate Carley Reinhard stands beside a poster about her research in the Slave Narratives Collection that she displayed at the 2018 annual meeting of the American Historical Association.

During Shaw’s course, Reinhard asked Shaw to serve as her adviser on a senior research project to find out more about the narrative. The pair put together a winning grant proposal that funded Reinhard’s trip to the Library of Congress last summer to research the Slave Narratives Collection in the Manuscript Division. The collection contains more than 2,000 first-person accounts of slavery collected in the 1930s as part of the Works Projects Administration (WPA).

Reinhard subsequently won another grant to continue her research, and she was selected by the American Historical Association to display her findings in a poster session at its 2018 annual meeting, held in Washington, D.C., in January. While in Washington, she visited the Manuscript Division with Stephanie Shaw.

Here Reinhard discusses her research, her experiences at the Library and the career her project has inspired her to pursue.

Tell us a little about the red-cloth narrative.
It consists of various forms of a story former slaves recalled in WPA interviews about how their relatives were captured by slave traders who used red trinkets such as cloth to entice slaves. In some instances, individuals were invited aboard a ship to trade for these goods. In other cases, the cloth was laid out for someone to follow in almost a Hansel-and-Gretel fashion.

Among the narratives in the WPA collection, one of the most cited is the account of “Granny Judith,” relayed by her grandson Richard Jones:

Some strangers wid pale faces come one day and drapped a small piece of red flannel down on de ground. All de black folks grabbed for it. Den a larger piece was drapped a little further on, and on until de river was reached. . . . Finally, when de ship was reached, dey drapped large pieces on de plank and up into the ship ‘dill dey got as many blacks on board as dey wanted.

My initial question was how and why this story developed. My research expanded to include how it continued to change and develop as slavery expanded in the United States.

What is the significance of the narrative to the tellers?
Its significance develops over time. The source material I used conveys the story largely from the perspective of the grandchildren of the original tellers. The original tellers were sharing a piece of their own history, an account of why they were enslaved. The Slave Narratives Collection suggests that their children who passed along the story recognized this meaning, but also viewed the story as a form of resistance, confirming that their family was not always enslaved and that they were not born to be slaves. The aspects of the story that resonated with them differed from the emphasis of those who first shared it. As is common with literature, individuals ascribed new meaning to a story relative to their lives.

What have you discovered from studying the narrative?
I found that individuals incorporated the slave trade into long-established African oral traditions, creating stories about capture and enslavement infused with symbolism that indicted those who participated in the trade. Slaves shared these traditions as their personal history with their children and grandchildren to educate them about the dangers of deception as well as their own capacity to be free.

I was especially intrigued by how the capture narrative evolved over time. As slavery expanded throughout the United States and the fear of kidnapping rose, the stories of being seduced by red trinkets were modified to warn children of the dangers of kidnapping within America. Even after slavery ended, the stories were kept alive in new ways, and the red cloth became a tool for empowerment and protection. Different contexts changed the specifics and generalities of the myth, but West African folk culture survived across time, oceans and continents.

What was your experience like working at the Library?
I had a wonderful experience working at the Library. I primarily worked in the Manuscript Reading Room. As someone new to conducting research, I was thankful for the guidance and support of the reading room staff members. Additionally, even after my time at the Library, I felt supported and cared about by the staff. When I visited with my adviser, Stephanie Shaw, this past January, Jeffrey Flannery, the head of the reading room, took the time to meet with us to discuss the project, view the poster I prepared for the American Historical Association’s annual meeting and give us a tour of the Manuscript Division. This included a chance to see some of the original documents I had researched in microfilm format. Getting a chance to look at the photographs was a wonderful experience. The microfilmed collections are a great resource, but they do not hold a candle to the gorgeous originals.

What do you plan to do with your research results?
My hope is to continue to develop the research I am doing on the narrative and ultimately publish an article with my findings.

What are the next steps for you?
This project has been my most intellectually rewarding experience and has inspired me to pursue graduate studies in African-American cultural history. I am thrilled to be making the move from Ohio to Maryland this coming fall to begin graduate school at the University of Maryland. Following completion of the Ph.D. program, I hope to pursue a career as a professional historian.