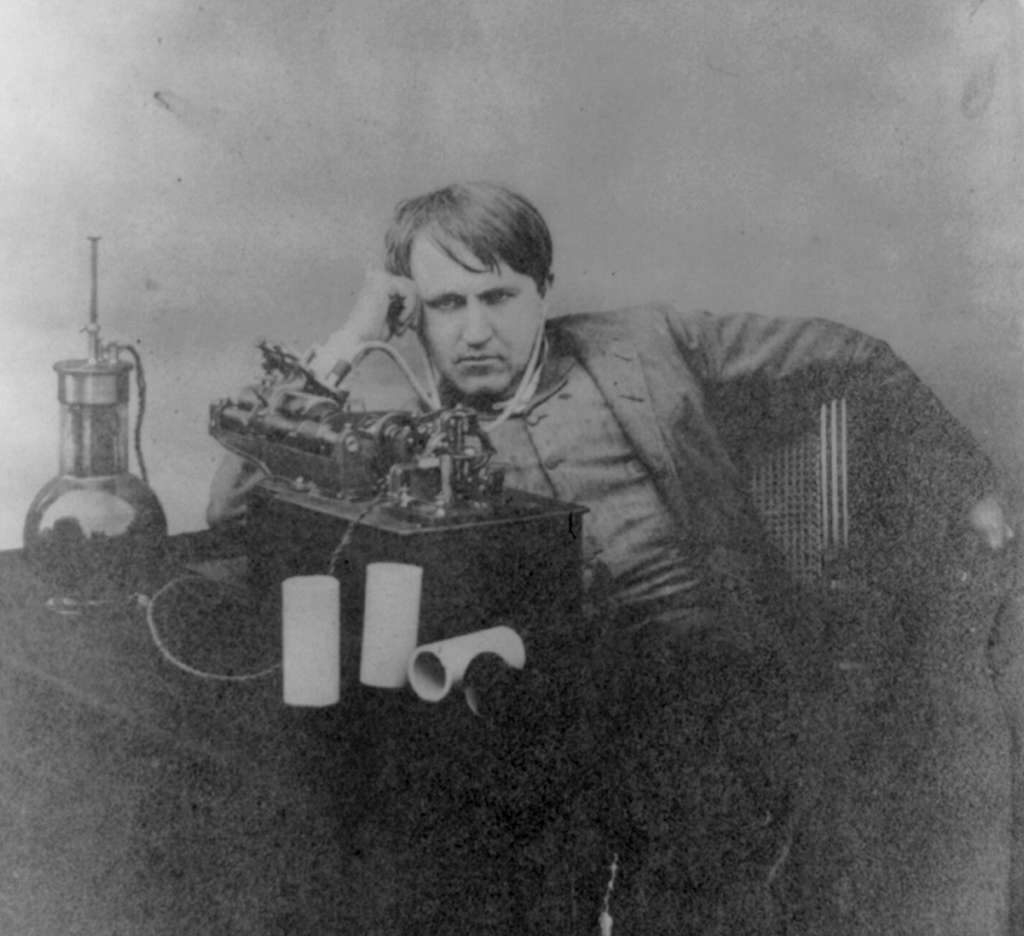 Thomas Alva Edison, slouching like a boss, with some of his inventions, in 1892. Photo: W.K. Dickson. Prints and Photographs Division.

This story appears in the November/December issue of the Library of Congress Magazine.

The beige strip of paper tape, not quite a yard long, lies in a slender box in the Library’s Manuscript Division. The neatly inked letters stretch across the length of it. They are just below a faint series of dots and dashes.

It is the first telegraph ever sent, from the U.S. Supreme Court chamber on Capitol Hill to the Mount Clare railroad station in Baltimore, by the telegraph’s inventor, Samuel F.B. Morse, on May 24, 1844.

It was if the world had shrunk, suddenly shrink-wrapped. People could communicate over dozens, hundreds or thousands of miles in seconds, not in days, weeks or even months. It was the birth of the modern, the world remade in the wake of the industrial revolution, the Victorian era giving way to age of invention.

In the next 59 years — a single human life span — the pastoral world that had dictated the life of mankind for millennia was gone, vanished in a puff of smoke from a passing locomotive. As steam-powered trains and paddle boats multiplied (themselves invented earlier in the century), a multitude of civilization-changing inventions followed. Telephones, typewriters, light bulbs, bicycles, automobiles, dynamite, vaccines, repeating rifles, the motion picture camera, x-rays, recorded sound, phonographs and records, data punch cards and radio — to name but a few — were created or taken to unprecedented levels in that time frame.

“Success four flights thursday morning,” Orville Wright wrote his father that afternoon at 5:25 p.m. He sent it, of course, by telegram. 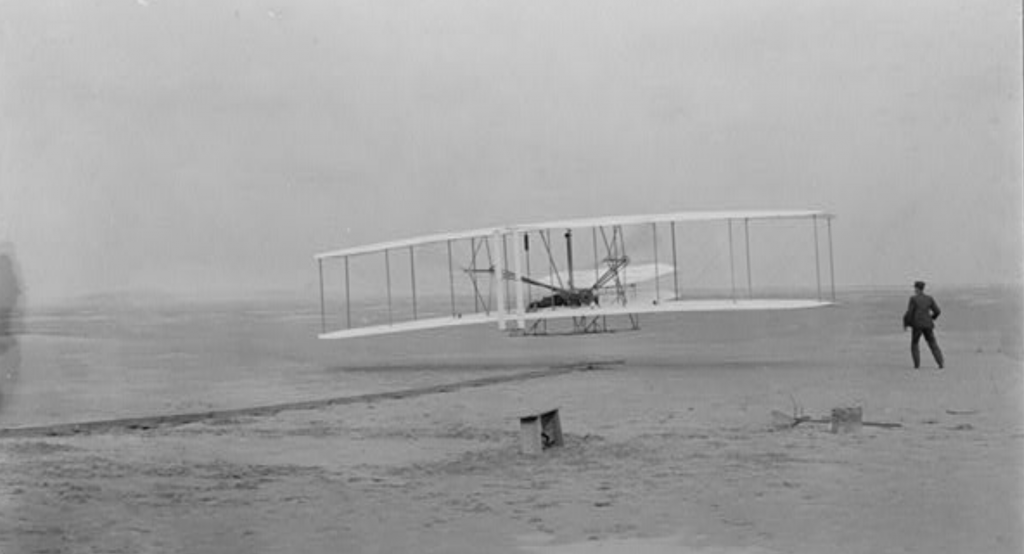 The modern world had arrived.

The Library houses a multitude of papers, blueprints, recordings, drawings, images and artifacts that document this dazzling era. The papers of Morse, the Wright brothers and Alexander Graham Bell are here. Collections also include those of Lee de Forest, the “father of radio”; Emile Berliner, whose innovations include flat-disc records and vast improvements in the recording industry; Herman Hollerith, whose data punch cards began modern computing (and formed the foundation of IBM); and even the Albert Tissandier Collection, which documents early balloon flights in France and across Europe. An original print of Edison Film’s “The Great Train Robbery,” is here, as is a cylinder recording of Kaiser Wilhelm II, the 1904 gift that inaugurated the Library’s recording collection. 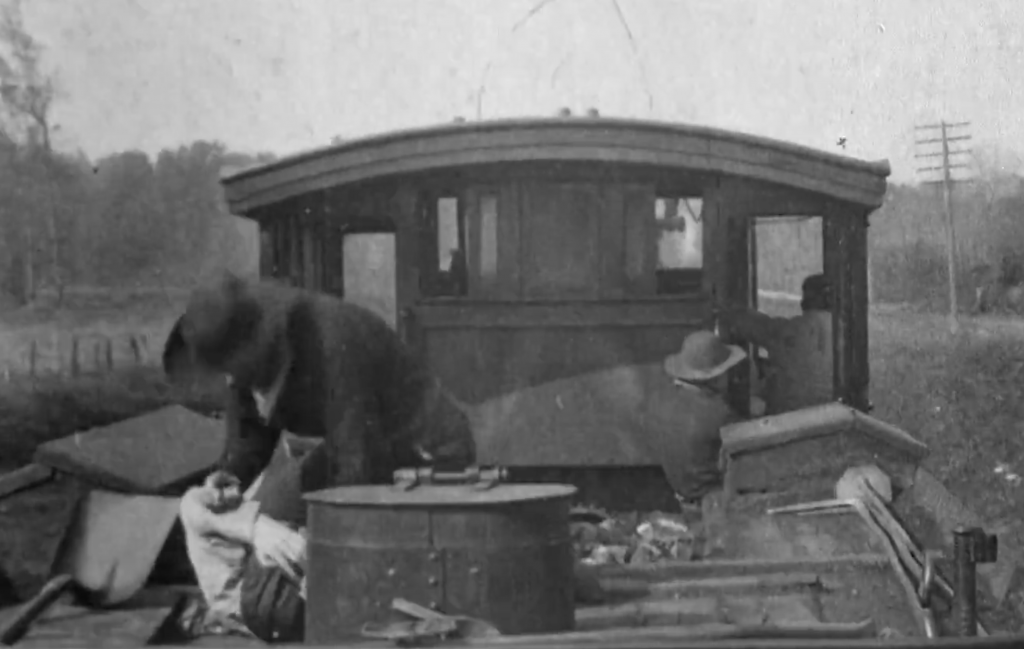 Here, for example, is a Bell sketch of the first telephone and notes describing the first phone call, on March 10, 1876. He wrote his father that day on letterhead from Boston University, narrating the experiment: “I called out into the Transmitting Instrument, ‘Mr. Watson — come here — I want to see you’ — and he came!”

“This is a great day with me,” Bell wrote. “I feel that I have at last struck the solution of a great problem — and the day is coming when telegraph wires will be laid on to houses just like water or gas — and friends converse with each other without leaving home.”

So quickly did engineers develop mass production of these breakthroughs that the world of a few years earlier began to seem quaint, in much the same way that readers today feel about the world before the internet and cell phones. In 1910, Berliner, a genius on the level of Edison and Bell, was waxing poetic about the world gone by of Washington in the 1880s, when “it required some time to get around, but people had plenty of time then.”

“Every 4th of July the daily paper announced: ‘To-night the electric light will be shone from the Capitol,’ and everybody was down on Pennsylvania Avenue,” he continued. “All at once we would see a brilliant arc light at the lower part of the dome … it was quite an interesting exhibition and everybody enjoyed it very highly.”

Edison invented the first commercially viable light bulb in 1879. So rapidly did electric light spread that by the mid-1890s Henry Ford was the chief engineer for the Edison Illuminating Co. in Detroit and built his first car on nights and weekends. By the time Berliner gave his nostalgic speech in 1910, Ford’s Model T was in mass production.

The modern world was being fashioned around the globe, but most of the above inventions were made in the United States, even though this period was the most violent in national history. The Civil War, the violent white resistance to Reconstruction, settlers warring against Mexico and Native Americans across the West, and the assassinations of three presidents — none of it deterred a restless scientific curiosity in the national spirit.

The racism and chauvinism of the day also dictated that nearly all labs, scientific equipment and funds were reserved for white men. Further, the rough business of legally claiming originality and the resulting profits often involved contentious lawsuits, further contributing to the bars white women and people of color faced.

This was exemplified by Margaret E. Knight, arguably the most famous female inventor of the age. When she invented the flat-bottomed paper bag and a machine for making them in 1868, a man in the factory stole the idea and tried (unsuccessfully) to claim the copyright. She patented more than 25 other inventions, some as complex as involving rotary engines. “I’m only sorry I couldn’t have had as good a chance as a boy,” she was quoted as saying. Josephine Cochrane of Illinois patented the dishwasher in 1886 with less hassle; her company later became KitchenAid.

“Each weekly issue of the Official Patent Office Gazette now shows a number of new ideas invented and patented by women,” wrote Fred G. Dietrich in 1899, in “The Inventor’s Universal Educator. An Educational Cyclopaedia and Guide.” “The records of the Patent Office bear witness to the fact that the inventive genius of the fair sex is constantly accomplishing remarkable, advantageous and profitable results.”

For black Americans, discrimination was worse.

George Washington Carver, born into slavery in Missouri, found his life’s calling at the Tuskegee Institute in Alabama under the auspices of Booker T. Washington. His work on nitrogen depletion in cotton fields — which, he determined, could be reversed by rotating the crop with oxygen-rich plants such as peanuts and sweet potatoes — saved withering cotton yields. Farmers across the South took up the technique, preserving the nation’s most important crop, and Washington was developing the first of more than 400 products that could use peanuts and sweet potatoes. 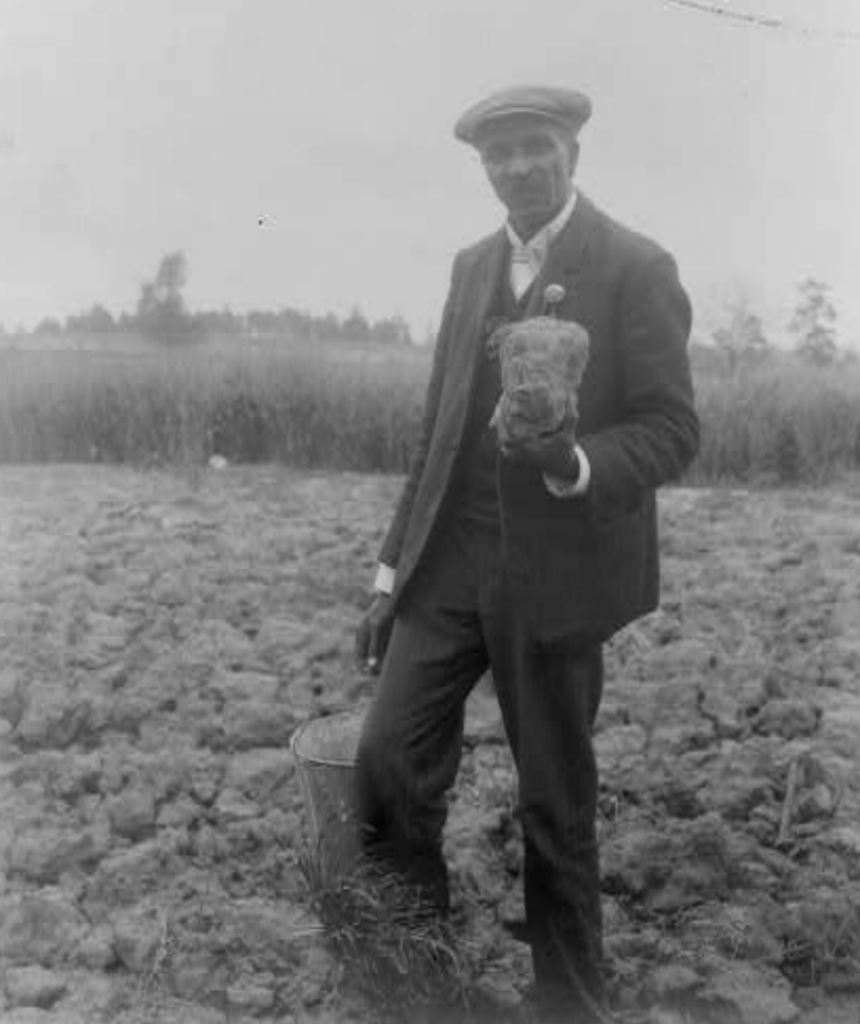 Meanwhile, that pre-1837 generation of humanity, already a sepia-toned memory by 1903 when the Wright brothers took flight, was the last to vanish in the way that no generation will likely do again. It sank into the ocean of time without a record of its voices and sounds, of its images and angles of light; of its slowness of time, of its long quiets of late nights and early afternoons; the last to know such a time as the natural order of the world.

The birth of the modern was the beginning of a new kind of civilization, one infinitely noisier, less patient, more intrusive, more connected and more permanent. The sound and look of things could be engraved on things that lasted, so future generations could see and hear them as they lived.

Berliner, picturing how people might use his Gramophone, imagined a world in which someone might record their voice as a toddler, teenager, adult and then on their death bed — a lifetime, recorded on a single disc, for anyone to hear, across the ages.

“Will this not seem,” he wondered, “like holding veritable communion with immortality?” 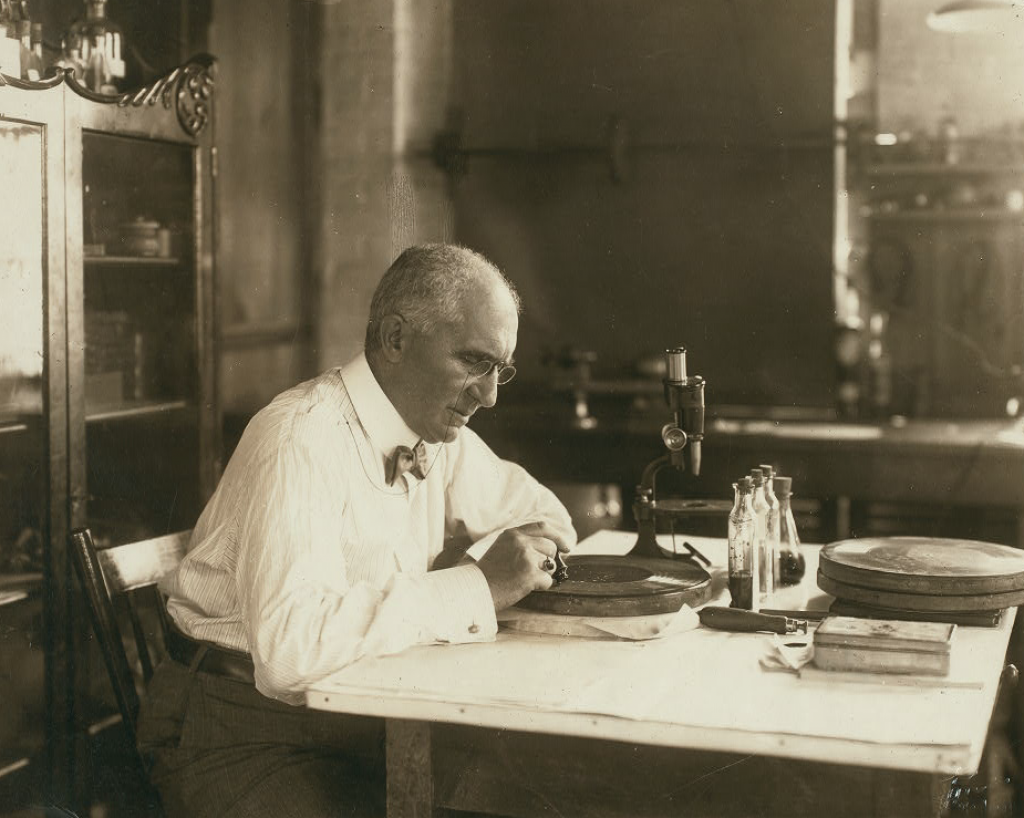 Berliner, working with one of his records. Prints and Photographs Division.