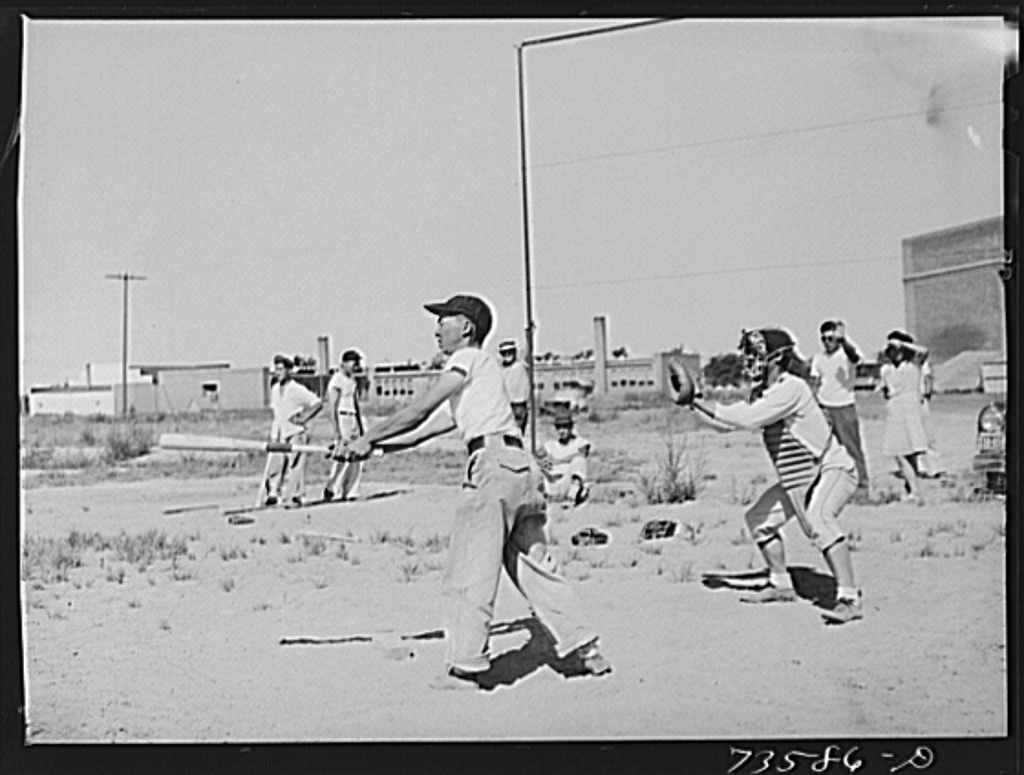 This is a guest post by Ryan Reft, a historian in the Manuscript Division. In recognition of Asian Pacific American Heritage Month, he explores the role of baseball in the nation’s Japanese-American community. For more about baseball, check out our blog series counting down the weeks until the June 29 opening of “Baseball Americana,” a major new Library of Congress exhibition.

Japanese-Americans play baseball in Nyssa, Oregon, in 1942. Following the Japanese attack on Pearl Harbor in December 1941, Japanese-Americans were forcibly evacuated from their homes and sent to government-run camps. Members of this team resided at a Farm Security Administration mobile camp. On Sundays, they came in a supervised group to play on the town ball field.

Few sports are as entwined with the American identity as baseball. The sport, its early proponents argued, promoted teamwork, individualism and meritocracy and gave immigrants a way to participate in and lay claim to their own piece of American culture. By the late 19th century, writes historian Samuel A. Regalado, it had become “the watchword for democracy.”

Especially on the West Coast – though never producing a luminous icon on par with a Jackie Robinson, Joe Dimaggio or Ted Williams – baseball for Japanese-Americans served as a critical force in shaping identity, binding ethnic enclaves, forging ties with Japanese culture and promoting civil rights. Moreover, in the face of debilitating World War II internment policies, baseball mitigated the trauma of forced incarceration.

Japanese immigrants to the United States were deeply familiar with baseball: Japan had embraced it in the late 1800s. In 1871, Hiroshi Hiraoka established the Shimbashi Athletic Club, the first of its kind in the nation, and soon the sport expanded in the Japanese imagination. 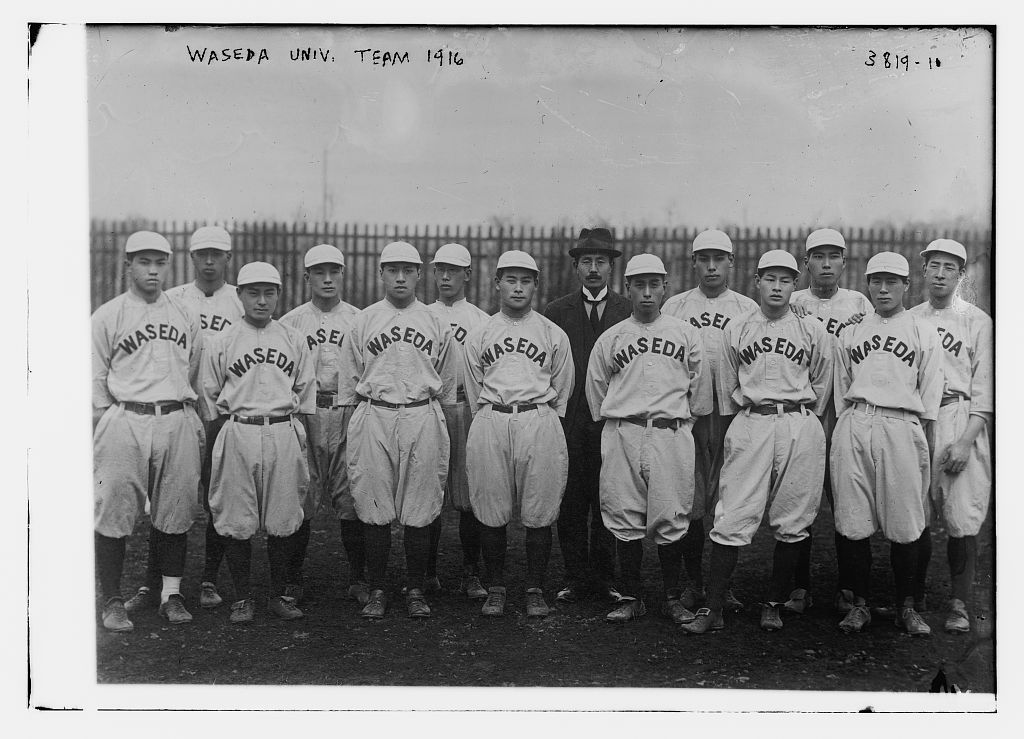 A team from Japan’s Waseda University in 1916.

During the Meiji Restoration, which lasted roughly from 1880 to 1910, leaders promoted baseball as a way to transform the image of Japan while facilitating international connections. In particular, the Japanese viewed the sport as a means to correct racist stereotypes casting Asians as sensuous, feminine and irrational. Baseball, in its inherent masculinity, helped Japan move away from exoticism to masculine competitiveness, to paraphrase historian Akira Iriye. 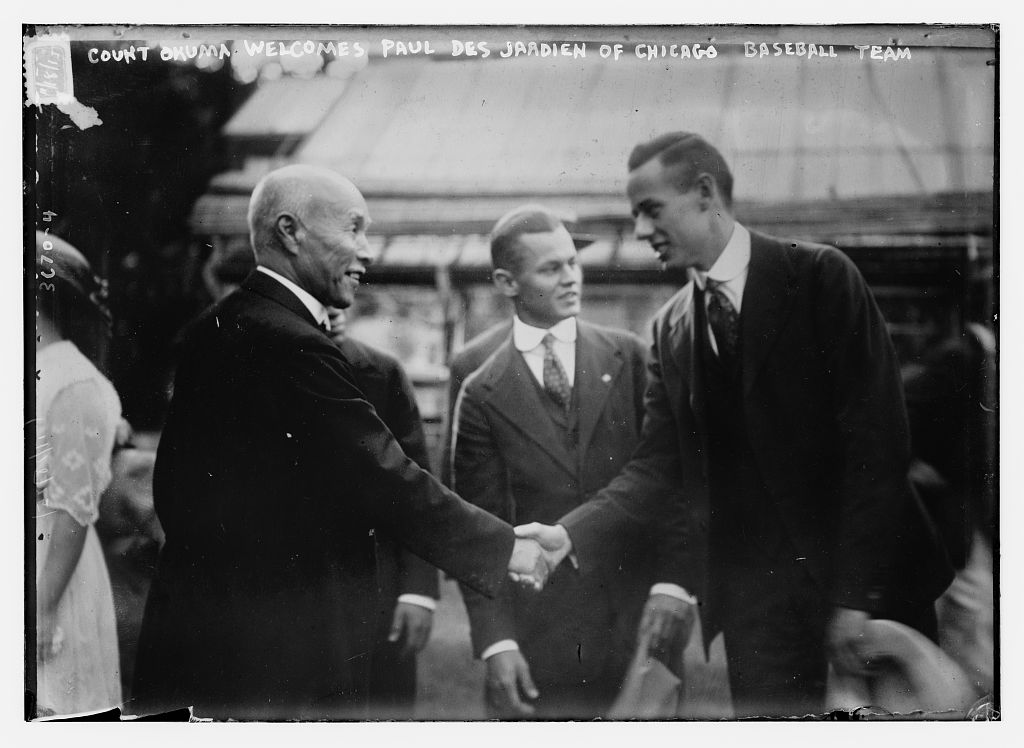 From 1885 to 1907, as Japan’s economy modernized, leaving some Japanese behind, 155,000 traveled east to Hawaii and the American West Coast. Nearly 25,000 of these immigrants had settled in Hawaii by 1896. Unsurprisingly, Japanese-American baseball leagues first emerged in the U.S. territory and often featured multi-ethnic and -racial competition, as Caucasian, Filipino, Japanese and Portuguese laborers demostrated their skills on the diamond.

As more Japanese immigrated to California, Washington and Oregon, the leagues followed. By 1900, more than 24,000 resided on the mainland, with just over 10,000 in California alone. Banned from playing in segregated mainland leagues, Japanese-Americans developed their own. San Francisco fielded the first U.S. mainland team of Japanese-American players in 1903, with the creation of the Fuji Athletic Club. The sport helped bring together the community’s urban-rural diaspora across California and the West Coast.

In Southern California, the weather enabled year-round play, helping to give coherence to the Japanese-American community. In this way, baseball clubs cultivated Japanese-American civil society in an era of “yellow peril” and anti-Japanese legislation, which ranged from discriminatory state laws prohibiting Asians and newcomers from land ownership, to immigration legislation like the 1924 Johnson and Reed Act, which more or less banned citizenship for Asian immigrants. Clubs soon emerged in San Francisco, Los Angeles, Fresno, San Jose and Stockton, and beyond California in Portland, Seattle and their hinterlands.

Part of the game’s power lay in its appeal across generations: “Baseball allowed each generation to interpret the meaning of the sport,” noted writer Wayne Maeda. First-generation Japanese immigrants, known as Issei, saw it as a means to connect their American-born children with Japanese culture, and believed it emphasized Japanese values of loyalty, honor and courage. In contrast, Nisei – second-generation immigrants – saw baseball as more modern than Kendo or Judo. Both generations believed the sport testified to their dedication to American ideals.

For parents, a simpler explanation also existed: It kept their kids out of trouble. More than a few older Issei worried about their children boozing, drugging or gambling their lives away in American environs.

The 1930s represented the high-water mark of Japanese-American baseball, particularly in California – by 1930, 70 percent of America’s Japanese population resided in the state. In 1936, Northern California communities started the first July 4th baseball tournament, a clear attempt to display attachment to American traditions and ideals. 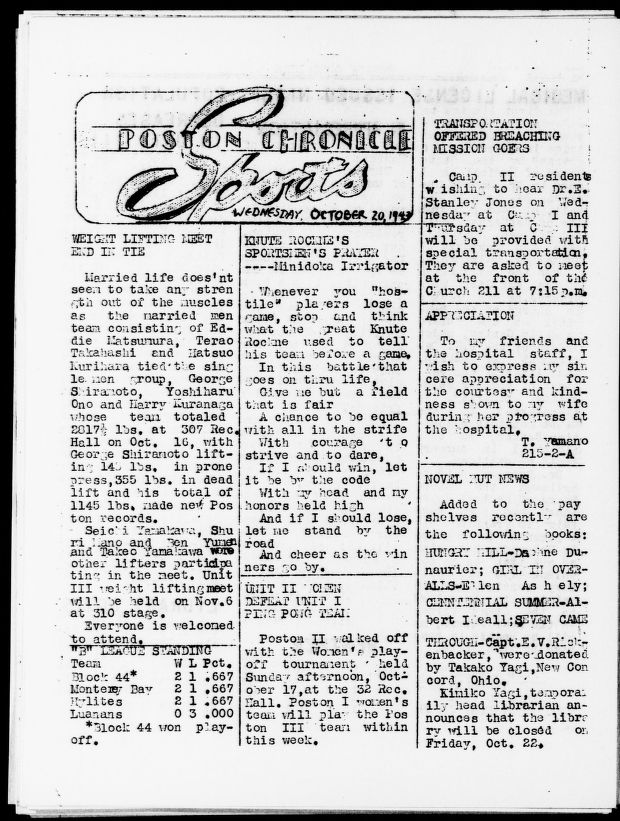 The sports page from the Oct. 20, 1943, issue of the Poston Chronicle, produced by occupants of the Poston, Arizona, internment camp.

Tragically, such gestures meant little in the wake of the Japanese attack on Pearl Harbor in 1941, after which President Franklin D. Roosevelt signed an executive order that allowed the forcible removal of nearly 120,000 U.S. citizens and residents of Japanese descent from their homes to government-run camps across the West.

During internment, baseball once again took center stage, providing an outlet for the trauma of incarceration. At the Merced County Fairgrounds, internees transformed an empty landscape into a diamond. “We had to make the baseball diamond, and there were no stands, no seats, no nothing, so the crowd just stood around the field and watched the game,” remembers internee and baseball standout, Fred Kishi. Camp newspapers devoted nearly as much coverage to baseball as to Nisei serving on the front.

Internment robbed many of the best Japanese-American players of the opportunity to compete at the professional level. Eventually, Japanese nationals became a common site in Major League Baseball, no doubt facilitated by earlier transnational connections. But their American counterparts failed to achieve such success.

The fact remains, however, that baseball shaped Japanese-American identities, stitched together communities and generations and provided solace in the face of unjust incarceration. If the journey matters as much as the destination, baseball took Japanese-Americans across oceans and cultures while rooting them more firmly in American soil on their own terms.