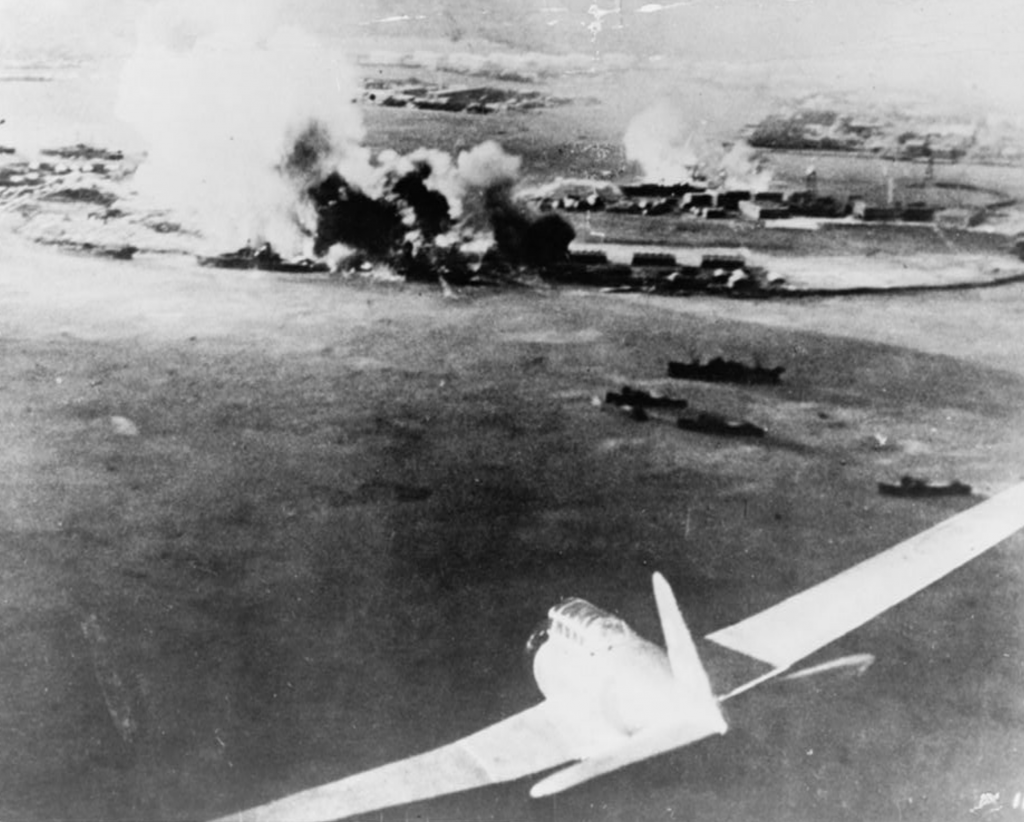 Mitsuo Fuchida had one of the more interesting lives of the 20th century. He led the Japanese strike force in the attack on Pearl Harbor, briefed the Emperor on its success and was critically injured in the Battle of Midway. After the war, he converted to Christianity and became an evangelist in the United States. His after-action sketch of the Pearl Harbor attack is now in the Library’s collections. Ryan Moore, a cartographic collection specialist now detailed to the History and Military Science Section, contributed to this report.

Photo by a Japanese pilot coming in behind a fellow bomber during the Pearl Harbor attack. Prints and Photographs Division.

Just before 8 a.m. on Dec. 7, 1941, Mitsuo Fuchida, leader of the Japanese strike force in the attack on Pearl Harbor, radioed his force: “To-ra! To-ra! To-ra!” It was the signal that they had achieved complete surprise.

During the next two hours, during two waves of attacks, he circled above as his fliers killed more than 2,400 Americans, sank four battleships and ignited war between the two nations.

On Dec. 26, he was back in Tokyo, walking into a small room in the imperial palace. At one end was an elevated platform, about two feet high. A court official walked through, wafting incense. Then Emperor Hirohito entered, wearing the uniform of a “naval generalissimo,” sat down on the elevated platform and listened to a briefing from the men who carried out the attack. 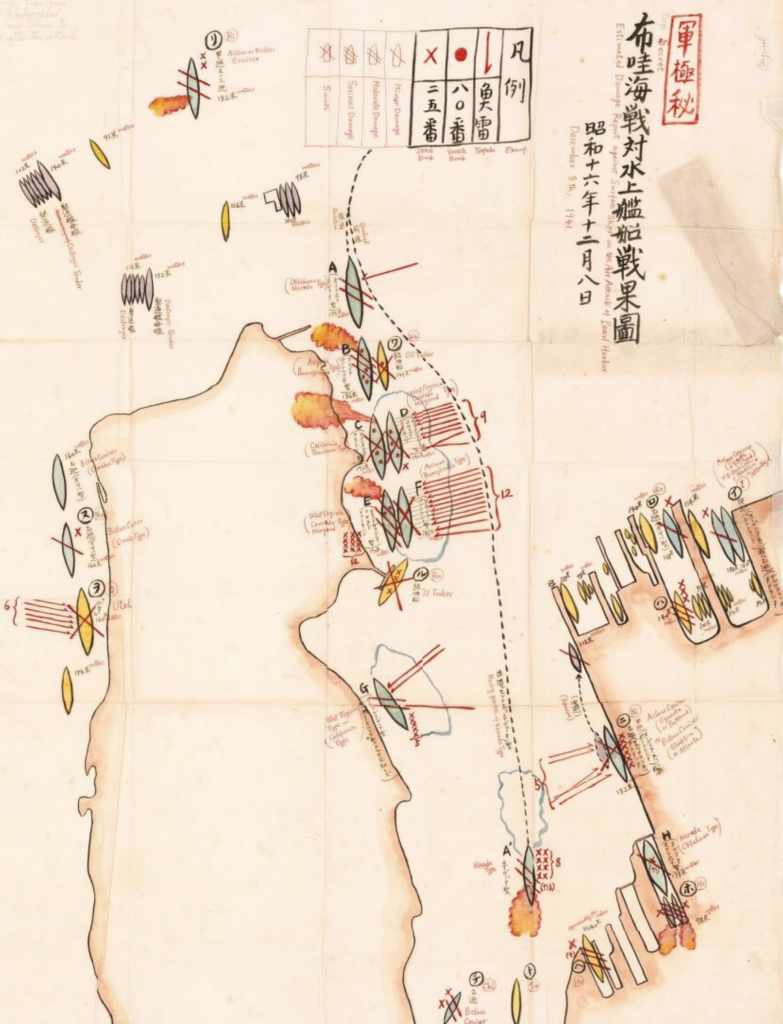 The heart of Fuchida’s presentation was his rectangular, hand-drawn map of the harbor and the ships that had been struck. It was mostly accurate, detailed and highly classified. He used a photo enlargement of it to make it easier to see during the presentation.

Today, Fuchida’s original Pearl Harbor map — a one-of-a-kind artifact from a critical moment in world history, made by the person who carried it out — finally rests in the Library’s Geography and Map Division. Its official title is “Estimated Damage Report Against Surface Ships on the Air Attack of Pearl Harbor.” It was purchased from the Miami-Dade Public Library in 2018, ending an odyssey of more than three quarters of a century in which the map was primarily kept in the private collection of Gordon W. Prange, chief historian of U.S. Army Gen. Douglas MacArthur.

“This was made in almost real time,” says Paulette Hasier, chief of the G&M Division, leaning over the map on a recent afternoon, pointing out details. Fuchida put the map together after consulting with dozens of other pilots and military staff during the voyage back to Japan. “Fuchida crafted this cartographic piece himself, but he didn’t do it without a lot of help from others.”

The map is in good shape on slightly yellowed paper, measures 31 by 24 inches, and is stored in a large conservation box. When the cover is pulled off, the map beneath is a surprising jolt of color.

It depicts an aerial view of the harbor and is labeled 軍極秘 (Top Secret) in red in the upper right corner. Using Tokyo time, Fuchida dated it 8 December 1941 and titled it in traditional Japanese calligraphy.

He carefully drew 60 ships in green, blue and yellow watercolors. He did not generally include the names of ships but instead provided their type and size. Fuchida indicated the level of damage with categories such as minor, moderate, serious and sunk. He noted the types of torpedoes and bombs used. He told the Emperor he thought it was about 80 percent correct, which, given that the pilots were making visual assessments at high speed while under fire, was impressive. His one major error was astonishing: the failure to note the sinking of the USS Arizona, by far the most lethal strike of the day. The Arizona wreckage was obscured by such thick black smoke that it could not be seen clearly from the air. 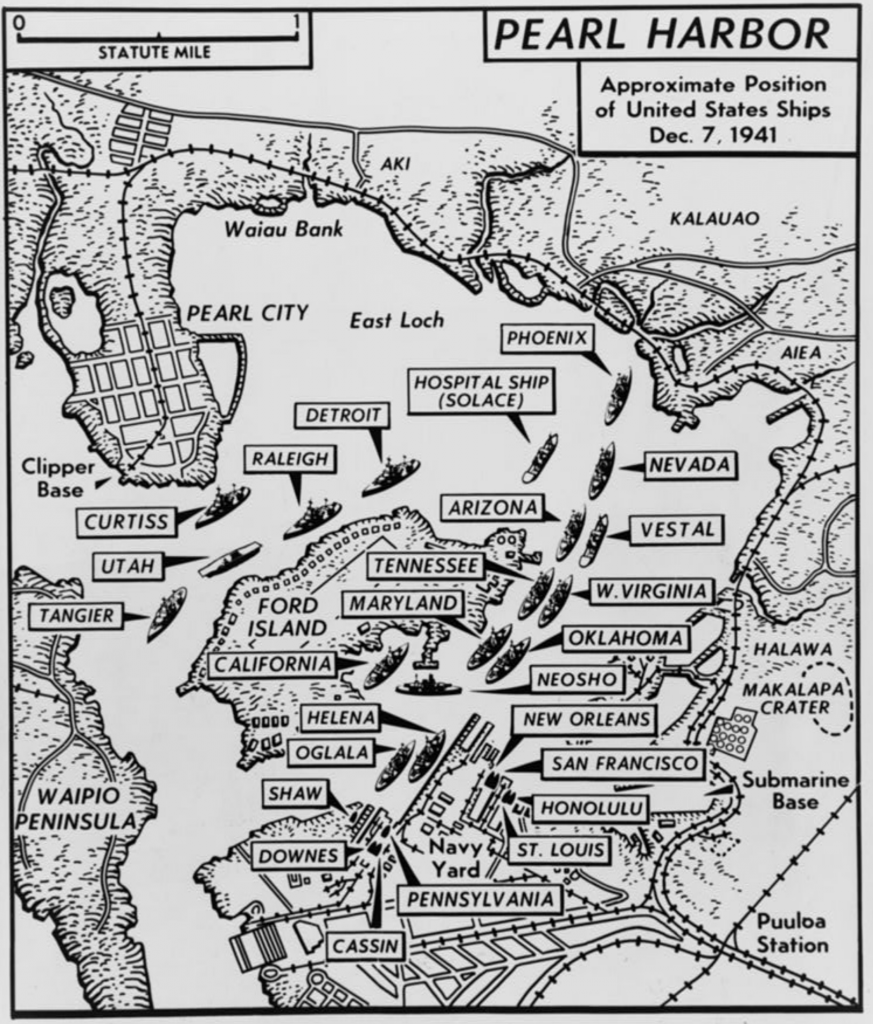 For comparison: A Navy map of the ships at Pearl Harbor just prior to the attack. Photo: Associated Press. Prints and Photographs Division.

The red arrows depicting torpedoes are still bright, as are the red “X” markings that denote a bomb strike. The orange of billowing fires is still clear. The desperate maneuvers of the battleship USS Nevada to attempt to escape the harbor are marked by a series of elliptical dashes.

Beneath the ink are pencil marks, showing his original outlines.

“It’s not your standard military map in black and white,” Hasier said. “Obviously, this was made for a presentation. There’s a bit of showmanship.”

The map’s authenticity isn’t questioned, largely thanks to Fuchida. He was one of the few pilots who attacked Pearl Harbor to survive the war – Naval History magazine estimated in 2016 that fewer than 10 percent of Fuchida’s squadron lived to see the end of the conflict. Fuchida himself was badly injured in the Battle of Midway and was hospitalized for nearly a year. After the war, he converted to Christianity, renounced Japan’s aggression, and often toured the United States as an evangelist. Sometime in 1946, Fuchida gave the map to Prange. The historian kept it for the rest of his life, as he wrote definitive accounts of war battles, including “At Dawn We Slept: The Untold Story of Pearl Harbor.” His notes became the background for the 1970 film, “Tora! Tora! Tora!”

After Prange’s death, scholars Donald Goldstein and Katherine Dillon edited many of Prange’s unpublished manuscripts and encountered Fuchida’s map. The Library almost acquired the map in 1994, as a gift from Goldstein’s publisher, but the opportunity passed, for reasons that are now not clear.

The map was sold at auction in 1994 to the Malcolm Forbes Collection, which sold it to the Jay I. Kislak Foundation in 2013. Kislak donated it to the Miami-Dade Library and, in 2018, that institution sold it to the LOC.

It now rests as a permanent marker of the “date that will live in infamy,” in President Franklin Roosevelt’s iconic words, in America’s national library.