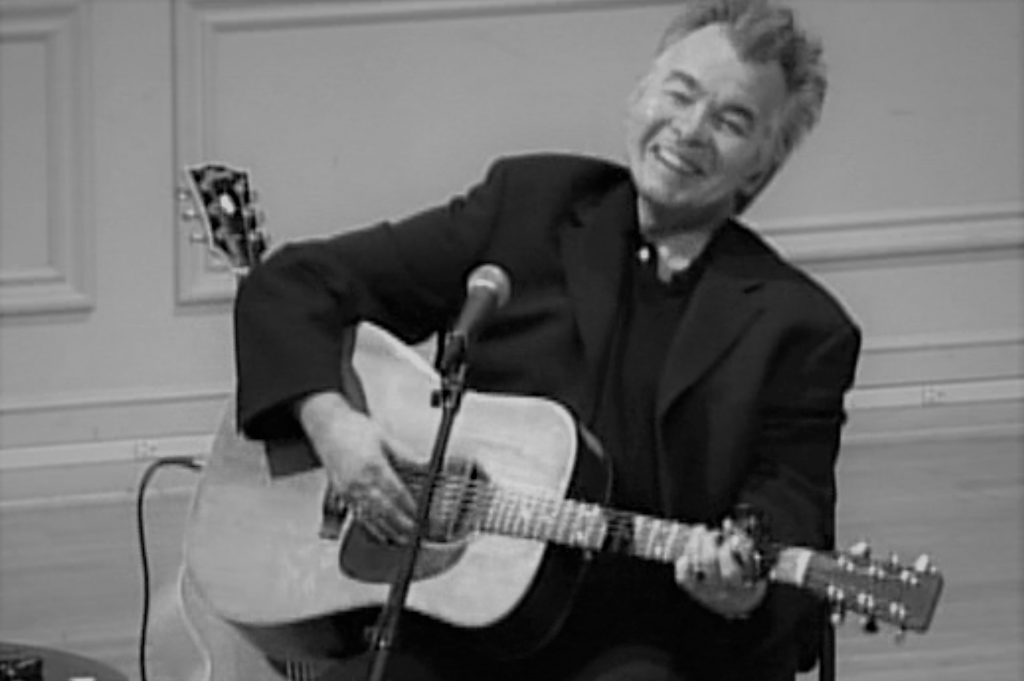 John Prine wrote songs that sounded simple but weren’t. He sang in a voice that wasn’t pretty but was honest in its unvarnished immediacy. Some of it was funny. Some of it broke your heart. Some people called it Americana; others, folk music.

By any name, the man produced poetry.

He died late Tuesday night from complications of COVID-19. He was 73. He’d survived a host of health problems, including cancer.

It was sad and awful. It was like someone you knew died. You stared out the window at the rain and there was nothing for it. Sometimes you lose and that’s just all there is.

One night in 2005, the Library’s Poetry and Literature Center hosted an onstage conversation between Prine and Ted Kooser, U.S. Poet Laureate. It’s always been one of our most popular interviews.

Prine’s parents were from Kentucky but they raised him in a Chicago suburb. He worked as a mailman and an Army mechanic. He sang at a low-rent Chicago bar called the Fifth Peg. His songs, conversational and without pretension, sounded like all of that. Just about everyone who wrote songs in post-Vietnam America admired or adored his work. It was the real thing. Like crystal, if you tapped his music, it tinged. It was that pure.

“Prine’s stuff is pure Proustian existentialism,” Bob Dylan once said. “Midwestern mind-trips to the nth degree.” Bruce Springsteen, who, like Prine, was once dubbed a “new Dylan,” remembered him fondly in a tweet: “…he was never anything but the loveliest guy in the world. A true national treasure and a songwriter for the ages.” Kooser, from their onstage conversation: “He did a better job of holding up the mirror of art to the ’60s and ’70s than any of our official literary poets. And none of our poets wrote anything better about Vietnam than Prine’s ‘Sam Stone.’ ”

“Sam Stone” may well be one of the most heartbreaking and effective songs written in the last half of 20th-century American music. Introduced by a funereal organ, it’s a four-minute tale of an American soldier, a young father who comes back a hero from the war in Vietnam. But the war, Prine tells us, had shattered all of Sam’s nerves and “left a little shrapnel in his knee.” Sam becomes a drug addict to ease the pain. He spends all of his family’s money on drugs. (“There’s a hole in daddy’s arm where all the money goes.”) His kids have to wear donated clothes. Sam overdoses and dies. The end.

It was sad and bitter and true, the angst of a nation that seemed to have lost its way. The chorus? “Sweet songs never last too long on broken radios.”

If he’d just written about heartbreak and sorrow, that would have been okay, but that wasn’t what elevated his stuff, because the man could just as easily be hilarious. There was an ironic, witty joy to his music. It couldn’t help but make you smile. “Sally used to play with her hula hoops/Now she tells her problems to therapy groups,” he wrote in the dazzling “Sins of Memphisto,” a surreal song from his 1991 album, “The Missing Years,” one of his best. The next line: “Grandpa’s on the front lawn staring at a rake/wondering if his marriage was a terrible mistake.”

In a later duet with Iris DeMent, he found a happy ending for one of his trademark offbeat couples: ”In spite of ourselves we’ll end up a-sittin on a rainbow/Against all odds, honey, we’re the big door-prize.”

So long, John Prine. America wouldn’t be America without you.