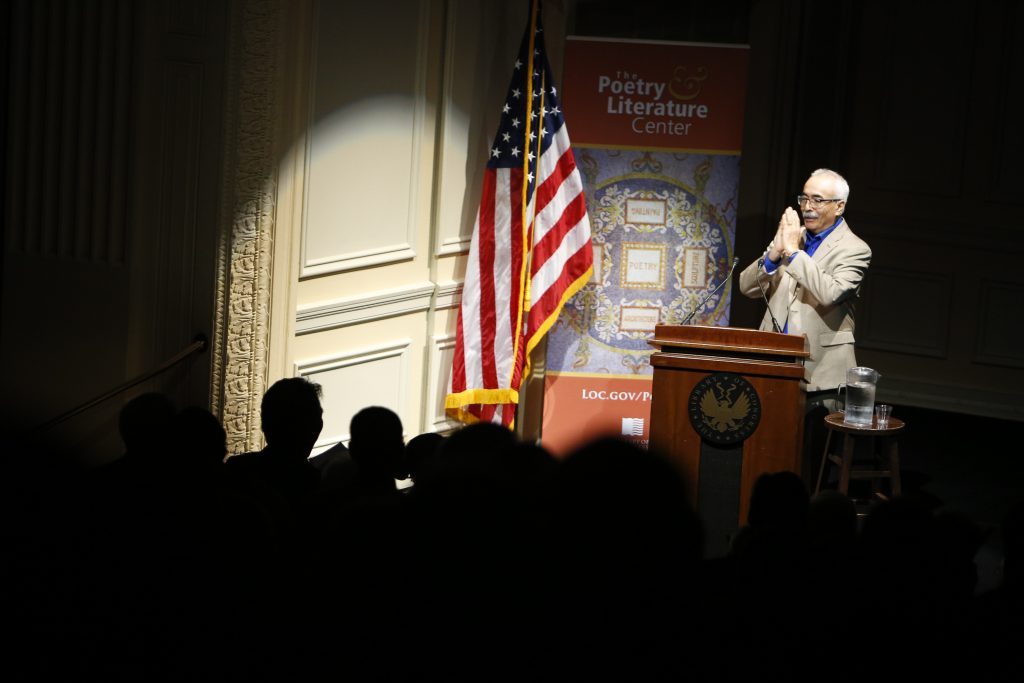 Juan Felipe Herrera at the Library of Congress in September 2015. Photo by Shawn Miller.

The Library of Congress will honor Juan Felipe Herrera, who is concluding his second term as the Poet Laureate Consultant in Poetry, with celebratory events on Wednesday, April 26. The events will be streamed live on the Library’s Facebook page and its YouTube site.

Titled “Speak the People/the Spark/el Poema,” the celebration will kick off at noonwith a choral performance by the Fresno State Chamber Singers, who hail from Herrera’s hometown of Fresno, California. They will perform newly commissioned pieces developed in collaboration with Herrera.

At 7 p.m., a panel discussion will take place about the continuing emergence of Latino culture and its influence on the nation. Participants will be Herrera; Martha González, lead vocalist for the Grammy Award-winning East L.A. rock bank Quetzal; Hugo Morales, the founder and executive director of Radio Bilingüe; and Louie Pérez, a singer and songwriter with the band Los Lobos. Rafael Pérez-Torres, an English professor at the University of California, Los Angeles, will moderate the discussion.

Immediately following the panel, a concert by Quetzal will close out the celebration. Quetzal brings together a wide range of musical influences, including Mexican ranchera, cumbia, salsa, rock, R&B, folk and fusions of international music. It is recognized as a leader and innovator in Chicano music.

About the celebration, Herrera said, “Meshing poetry and music with the Fresno State Chamber Singers, a panel on Latino culture, music by Quetzal—this night is a culmination of two years of beautiful and thoughtful audiences; of trains, planes, cars, highways, children, teachers and artists; of poetry seekers driving for miles to listen and exchange and tell me about their lives. This event will have all the love I can bring to it, and all the appreciations that have been given to me during these last two years; I hope to give back.”

Herrera is the author of 30 books of poetry, novels for young adults and collections for children. He has been one of the most active poets laureate in the history of the position, with two first-term projects and three second-term projects.

This past September, Herrera launched an online initiative, “The Technicolor Adventures of Catalina Neon,” a bilingual illustrated poem created by Herrera and artist Juana Medina. Presented at Read.gov, the poem features contributions by second- and third-grade students and their teachers and librarians from across the country.

Continuing his work with students, Herrera and the Library of Congress collaborated throughout the 2016–17 school year with the Poetry Foundation in Chicago and the Chicago Public Schools on a program titled “Wordstreet Champions and Brave Builders of the Dream” in which Herrera worked with high school English teachers to develop new exercises and strategies for teaching poetry.

Herrera’s third initiative during his second term involved creating the “Laureate Lab—Visual Wordist Studio” to serve as a performance and classroom space in the library of California State University, Fresno, where Herrera once taught. He uses the space to develop small-scale, dynamic programs and classes for the local community, mixing poetry with visual arts, song and movement.

For his poetry, Herrera has received two Latino Hall of Fame Poetry Awards, the PEN Oakland/Josephine Miles Award and a PEN/Beyond Margins Award. He has received fellowships from the Guggenheim Foundation, the National Endowment for the Arts, the Bread Loaf Writers’ Conference and the Stanford University Chicano Fellows. In 2016, Herrera was awarded the Robert Kirsch Award for lifetime achievement at the 36th L.A. Times Book Prizes.

The festivities honoring Herrera and the work he has done as poet laureate are presented by the Library’s Poetry and Literature Center, its American Folklife Center, its Music Division and its Hispanic Division.