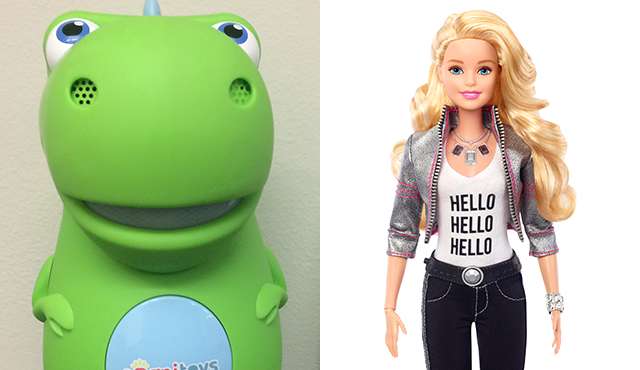 Consumer Privacy Rights Fund at the Rose Foundation for Communities and the Environment, University of Washington Tech Policy Lab

Hello Barbie, CogniToys Dino and other toys connected to the internet can joke around with children and respond in surprising detail to questions posed by their young users. The toys record the voices of children who interact with them and store those recordings in the cloud, helping the toys become “smarter.”As Wi-Fi-enabled toys like these compete for attention in the home, a new analysis finds that kids are unaware of their toys’ capabilities, and parents have numerous privacy concerns.

University of Washington researchers have conducted a new study that explores the attitudes and concerns of both parents and children who play with internet-connected toys. Through a series of in-depth interviews and observations, the researchers found that kids didn’t know their toys were recording their conversations, and parents generally worried about their children’s privacy when they played with the toys.

“These toys that can record and transmit are coming into a place that’s historically legally very well-protected ? the home,” said co-lead author Emily McReynolds, associate director of the UW’s Tech Policy Lab. “People have different perspectives about their own privacy, but it’s crystalized when you give a toy to a child.”

The researchers presented their paper May 10 at the CHI 2017 Conference on Human Factors in Computing Systems.

Though internet-connected toys have taken off commercially, their growth in the market has not been without security breaches and public scrutiny. VTech, a company that produces tablets for children, was storing personal data of more than 200,000 children when its database was hacked in 2015. Earlier this year, Germany banned the Cayla toy over fears that personal data could be stolen.

It’s within this landscape that the UW team sought to understand the privacy concerns and expectations kids and parents have for these types of toys.

The researchers conducted interviews with nine parent-child pairs, asking each of them questions ? ranging from whether a child liked the toy and would tell it a secret to whether a parent would buy the toy or share what their child said to it on social media.

They also observed the children, all aged 6 to 10, playing with Hello Barbie and CogniToys Dino. These…