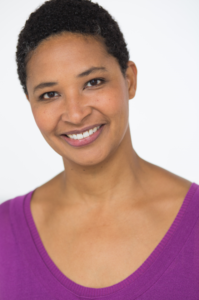 This is a guest post by Andrew Breiner, a writer-editor in the Kluge Center.

Danielle Allen, winner of the Library’s 2020 Kluge Prize for Achievement in the Study of Humanity, will host a series of exciting conversations at the Library to explore the nation’s civic life and ways that people from all political beliefs and social causes can build a stronger, more resilient country.

The series is called “Our Common Purpose—A Campaign for Civic Strength at the Library of Congress.” It consists of three public events this spring that are free and open to everyone. Each event will be accompanied by a workshop for K-12 educators and public librarians, in which teachers from across the country will connect, explore, experiment and create new ways of making civic ideals come to life in their classrooms.

The American Academy of Arts & Sciences is supporting Our Common Purpose and recently released a report, co-edited by Danielle Allen, “Reinventing Democracy for the 21st Century.”

The series begins March 11 with an event highlighting civic media as a promising counterpoint to the polarizing universe of social media. The second event, in April, will explore how voting systems can be a deciding factor in political decision-making, and how they might be reformed. The final event, in May, will look to history and search for ways we can create an inclusive narrative of America’s past. Each will feature Danielle Allen as the moderator with leading thinkers in social and civic media, reform in political institutions and the American historical experience.

The poster for the campaign, created by artist Rodrigo Corral, showcases the shared iconography of American civic life as well as the Juneteenth flag, a symbol that is known to some, but unknown to many others. This illustrates the theme of invisibility – that not everyone’s American experience is broadly understood or apparent.

“The art celebrates so much of what the Kluge Prize and Danielle Allen stand for: togetherness, connectivity, action, and above all else the bonds we have in our communities no matter our differences,” Corral said.

Allen, a native of Takoma Park, Maryland, grew up in California and is a multi-talented academic, political theorist, author and columnist. She is the James Bryant Conant University Professor at Harvard University and Director of Harvard’s Edmond J. Safra Center for Ethics. Librarian Carla Hayden announced Allen as the Kluge Prize honoree last June. She was awarded the prize for her internationally recognized scholarship in political theory and her commitment to improving democratic practice and civics education. Her books include “Our Declaration: A Reading of the Declaration of Independence in Defense of Equality,” “Why Plato Wrote,” and a memoir about her cousin’s tragic experiences in the criminal justice system, “Cuz: The Life and Times of Michael A.”

The Kluge Prize recognizes the highest level of scholarly achievement and impact on public affairs and is considered one of the nation’s most prestigious award in the humanities and social sciences.

“At a time when trust in both civic and scientific institutions seems to be at a low point, Allen’s research, writing, and public engagement exemplify the societal value of careful scholarship and inclusive dialogue,” Hayden said. “Her engagement with public policy issues, including societal responses to the Covid-19 pandemic, demonstrates the possibility and value of careful, judicious, and rational deliberation among individuals from multiple academic disciplines and vastly different political backgrounds.”

Here’s the schedule of events.

Panelists will explore the role of information in democratic society and addressing the challenges citizens face in identifying trustworthy sources of information in the digital age. They will consider the potential of civic media to inform and educate within the context of the broader social media ecosystem, where the incentives are to spread information regardless of its truth or value. Panelists will consider what civic media looks like and how it can it compete with social media.

Talia Stroud (University of Texas) is a nationally-renowned expert on examining commercially viable and democratically beneficial ways of improving media.

Brendesha Tynes (University of Southern California) is a leader in the study of how youth experience digital media and how these early experiences are associated with their academic and emotional development. She is also interested in equity issues as they relate to digital literacy.

Richard Young is the founder of CivicLex, a non-profit that is using technology, media, and social practice to build a more civically engaged city. CivicLex aims to build stronger relationships between citizens and those who serve them.

How Political Institutions Shape Outcomes and How We Might Reform Them

In the U.S., political institutions are often seen as neutral, but in fact they reflect choices and compromises about how we balance between majority and minority interests. Panelists will look at the way different systems of electoral decision-making in a democracy can, by themselves, lead to very different outcomes, and what can be done to reform them in ways that result in more responsive and deliberative legislative bodies.

Katie Fahey (Of The People) leads an organization dedicated to pursuing reforms to empower individuals in the political system.

Cara McCormick (National Association of Nonpartisan Reformers) is an activist and leader of organizations dedicated to electoral reforms at all levels.

Speakers will discuss the changing interpretations of the nation’s founding documents and the principles they were founded upon. They will also explore the tension between celebrating what is good about the U.S. and its history, while addressing the exploitation and inequality that are also part of the American legacy.

We have not finalized the panelists for this program

In addition, late in the year the Library will be reaching out to public librarians across the country to explore ways in which they guide citizens of all ages in finding credible information on the internet. Hundreds of librarians will participate in six weeks of moderated, online discussion. After these six weeks of conversation, a smaller, representative group of librarians will share with Danielle Allen and the president of the American Library Association a report that summarizes the group’s insights on separating fact from fiction on the internet. 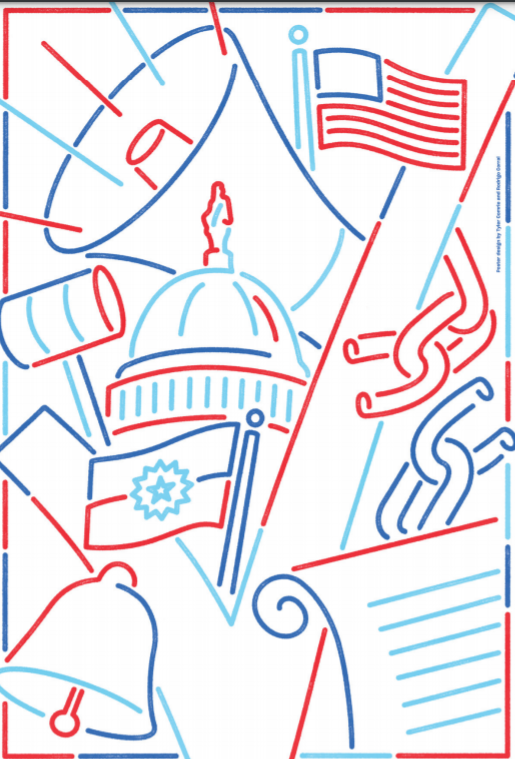 “Our Common Purpose” featuring the Juneteenth flag with one star. Artist: Rodrigo Corral.