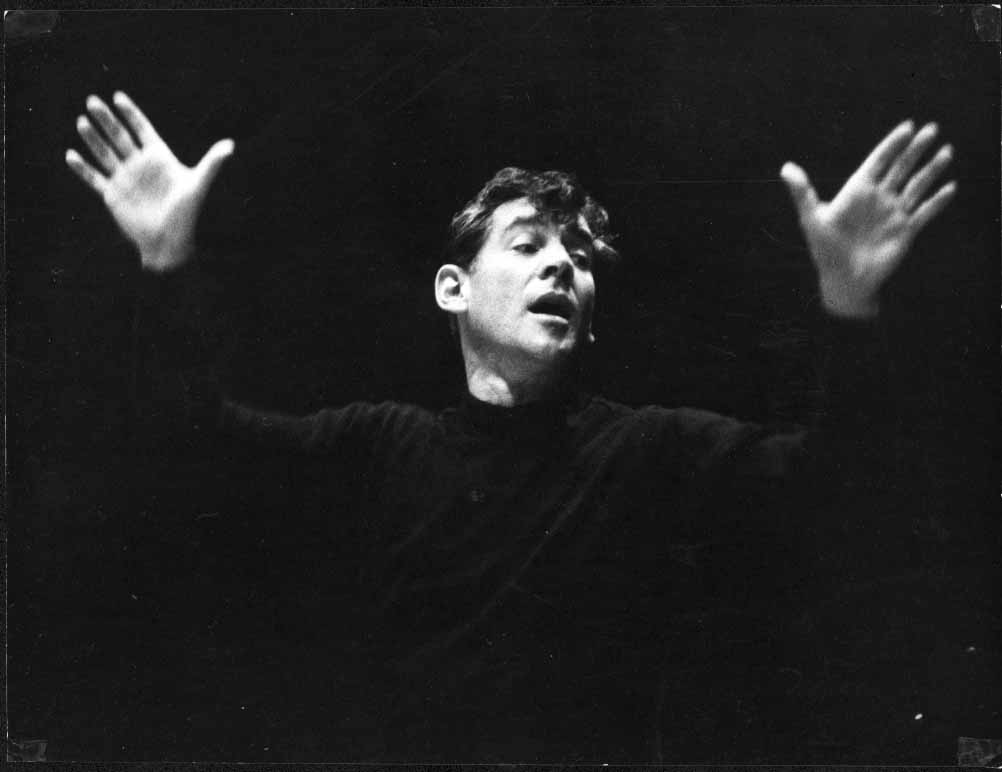 This is a guest post by Mark Horowitz of the Music Division. It is reprinted from the May–June issue of LCM, the Library of Congress magazine. Titled “Brilliant Broadway,” the entire issue is available online.

In honor of the 100th anniversary of Leonard Bernstein’s birth, the Library has dramatically expanded – by some 2,400 items representing tens of thousands of pages – its online Bernstein Collection, which, for the first time, includes musical sketches and scrapbooks as well as many more letters, photos, scripts, recordings and other material.

It’s been 27 years since Leonard Bernstein passed away, yet he seems more omnipresent and influential than ever. The doings related to his centennial are staggering, dwarfing the centennial celebrations of any previous American musician – including titans John Philip Sousa, George Gershwin, Aaron Copland or Richard Rodgers.

More than 2,000 concerts are scheduled on six continents, along with exhibits, including a Grammy Museum touring exhibit; several books; two documentaries in Germany alone; a 25-CD box set of just his musical compositions; and a 100-CD box set of him conducting. And, Steven Spielberg is planning a film remake of “West Side Story.” 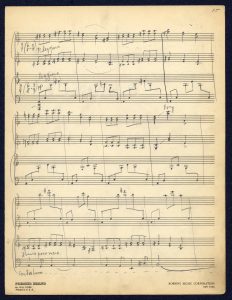 A manuscript for the unproduced ballet, “Conch Town,” from about 1940. It includes music for the song that became “America” in “West Side Story.”

Contributing to all this is the Library’s extraordinary Leonard Bernstein Collection, estimated at 400,000 items – one of the largest in the Music Division. Those items go far beyond the expected music manuscripts. The collection also includes, but is far from limited to, his writings, personal correspondence, fan mail, business papers, photographs, datebooks, scrapbooks, recordings and objects that range from passports to batons to the suit in which he conducted his New York Philharmonic premiere. The Bernstein Collection long has been among the most heavily used in the Music Division, but this year it seems to eclipse all others.

Bernstein arguably was the most prominent musical figure in America in the second half of the 20th century. A polymath – a Renaissance man – he was a composer, conductor, pianist, educator and social activist. He composed musicals, ballets, operas, a film score, a mass, chamber music and symphonies.

He conducted the New York Philharmonic during 40 seasons, most as music director – its first to be American-born and American-trained. All told, he conducted more than 75 orchestras. He virtually invented musical education on television, mostly with his Young People’s Concerts – 53 concerts from 1958 to 1972. Those broadcasts and subsequent showings in music classes inspired generations of musicians. Bernstein also was politically involved and a passionate advocate for peace and nuclear disarmament, racial equality and AIDS research. 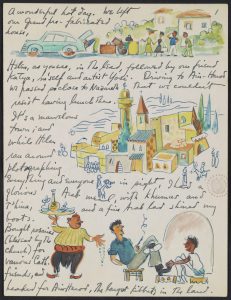 A letter Bernstein wrote to his mother, Jennie Bernstein, while on a trip to Israel in 1948.

The Bernstein Collection holds, among many other things, more than 50 boxes of his music manuscripts and sketches alone, including an anthem he wrote when he was a student at Boston Latin in 1935; “It’s Not So Hotsy Totsy Being a Nazi,” a song he wrote during World War II; and his notes for a Holocaust opera (tentatively titled “Babel”) he was working on the year he died.

There have been wonderful discoveries along the way, such as a manuscript for an unproduced ballet, “Conch Town,” he wrote circa 1940 while staying in Key West. On examining the score, librarians discovered it included the music for what became the song “America” in “West Side Story” some 17 years later. There’s also the tender “A Valentine (for Jamie and Alexander),” written for two of his children, which became the majestic finale to “Candide,” “Make Our Garden Grow.”

The correspondence includes all the things one might expect – and the unexpected. There’s an extraordinary letter from Jackie Kennedy written at 4 a.m. the day after Bernstein conducted the funeral mass for Robert Kennedy at St. Patrick’s Cathedral. “It was so much more appropriate for this Kennedy – my Kaleidoscopic brother-in-law – and his wife who loved him mystically,” she wrote of Bernstein’s musical selections. 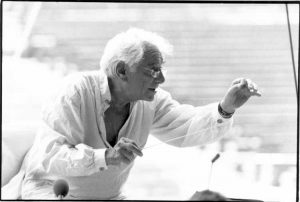 The conductor at a rehearsal in 1988, two years before his death.

In the fan mail was discovered a letter from the composer John Adams, while a student at Harvard in 1966. Having just heard Bernstein’s “Chichester Psalms,” he expresses frustration in understanding how Bernstein can “turn his back on the future.” Bernstein’s thoughtful reply is written on the back: “One writes what one hears within one, not without. Lord knows I am sufficiently exposed to the ‘influences’ of non-tonal music; but obviously I have not been conditioned by them. … I cannot conceive music (my own music) divorced from tonality.” That response seems to have changed Adams’ life. In a follow-up letter in 1968, Adams writes: “You replied to my letter with a patience and wisdom which did a great deal towards shaking me out of my inertia.”