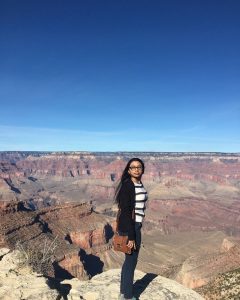 This is a guest blog post by Sukanya Barman. She was an 11th-grade student at White Station High School in Memphis when she became a winner of the 2017–18 Letters About Literature contest, a reading and writing competition for students in grades four through 12 that involves reading a work and writing to its author (living or dead). Entries for the 2018–19 contest are now being accepted. Here Barman writes about her experience as a participant.

I never expected much to come from the letter.

It was an assignment over winter break in my junior-year English class. My teacher handed out the formatting guidelines and told us that we wouldn’t be graded on content; instead, we would just be getting a completion grade for submitting an entry for the competition.

I wasn’t too concerned about it; my family and I were going on a long vacation, where we drove across the country from Tennessee to Arizona, exploring the incredible national parks in the West together. I was much too busy exploring these incredible sights to even attempt to write this letter, but there was still something intrinsically reflective about standing on the edge of the Grand Canyon and staring into the marvels that nature had wrought. I felt small, eclipsed by the beauty and wonder of the world around me.

It was on the drive home that I began to seriously consider what book has changed me the most, out of the countless I’ve read along the way. There was a little bit of casual competition involved as well — my sister had placed second in Tennessee in this same writing contest five years ago.

It was there, in the back of our 2013 Honda Civic, surrounded by my family and on my way home, that I truly started to think about my letter. Book after book flew through my mind — “Harry Potter” shaped my childhood, Brandon Sanderson fueled my love of fantasy and pushed it to greater heights, “Outliers” helped me understand the world. But in the end, instead of choosing a book that shaped me, I chose a book that I grew into.

I remembered “Catalyst” by Laurie Halse Anderson, a novel I had re-read a few months ago. I had initially stumbled upon it in middle school, after I finished “Speak” by the same author. I rested my head against the window and watched the scenery flashing by before my eyes as I thought about how much I had changed in between those two readings. I thought about how much more impactful the book became just a few years later and about how just a few years can make such a difference in my outlook.

This was how I chose the book; the truly difficult part came afterward — the writing. We had returned to our home only a few days before the new semester began, and thus only a few days before the due date for the letter. I couldn’t focus on writing, and every sentence that was forced onto the Word document was worse than the last. At that point, as most teens would do, I took a break to watch some Netflix. In the earliest hours of the morning, I surfaced from my late-night marathon and decided that I needed to at least draft this letter. And so, I did.

Writing this letter so late at night meant that my internal filters had come down, making the letter significantly more genuine. I had been struggling to find the words earlier, but now they came spilling out in a cathartic release, as if they’d been there all along just waiting for me to discover them. These were my deepest fears, my deepest insecurities, my deepest vulnerabilities. I had finally found the words to describe exactly why I had managed to relate to Kate Malone so fundamentally, and they came pouring out (along with quite a few tears in the process).

The next day, or I suppose later that same day, I read it over, slightly mortified by the emotional vulnerabilities I had expressed. I did delete some of the most embarrassing sentences, and I spent some time cleaning up and editing the mess that had exploded onto the document. I assumed that not many people would end up reading this, which made me more comfortable submitting the letter. Eventually, I decided it was good enough and called it a day. The next day, I printed it out and gave it to my English teacher. I got my completion grade, which was the end of it as far as I was concerned.

One day, a few months later, I walked into AP Language and Composition to see my name on the board as the first-place winner in my state. Absolutely shocked, I went back to read the letter I had submitted, and I seriously wondered whether my letter had been mixed up with someone else’s because, to me, the writing seemed terrible — select sentences were cliché, my word choice was lacking in some spots and some parts just sounded bad. My teacher asked me to send her a copy, and when she expressed how much she enjoyed it, I became even more confused. In the end, I accepted the prize gratefully and decided that maybe others could see something in the letter that I could not.

Then, when I got the call that I had been chosen as a National Honor recipient, I became even more flabbergasted. I ran around my house in a frenzy, in absolute disbelief and delight. When I read my letter yet again, it looked like a pile of trash; there are so many edits I would love to make, which makes it even more frustrating to see it published online.

There are multiple ways that I would take this. Maybe I should have written it earlier, so that I could edit it more thoroughly. At the same time, however, when pieces of writing become too edited, sometimes they can lose that spark that made them heartfelt or interesting in the first place. In all honesty, I have never been truly and fully satisfied with a piece of writing in my life. For me, the real trick is about finding when to stop — that sweet spot where the writing is clear and in your style and also has life. For anybody who is planning on entering this contest, my main suggestion would be to hone in on the emotions and try to let the writing flow naturally from there.

Because I never expected much from this letter, the things that it has given me have become more precious. Beyond the prize money or the bragging rights for one-upping my sister, it’s given me a more thorough understanding of the role of emotion in writing and the opportunity to share my personal thoughts and reflections with far more people than I ever would have thought.