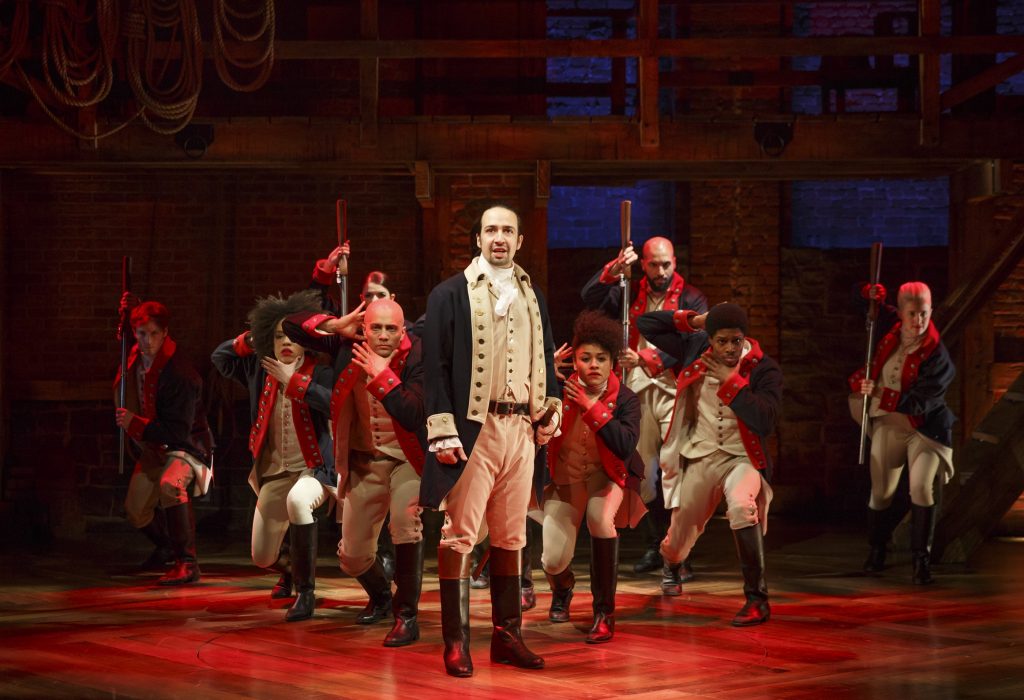 This post is reprinted from “Brilliant Broadway,” the May–June issue of the Library of Congress Magazine. The entire issue is available online.

Lin-Manuel Miranda (center) as Alexander Hamilton in “Hamilton,” the show he created. Photo by Joan Marcus.

It started with hearing a catchy song on a new soundtrack—and then another. Soon Kaleena Black was hooked on one of Broadway’s biggest shows. And yet Black, an education specialist at the Library of Congress, isn’t usually a musical theater aficionado.

“Hamilton” was different, though, with its infusion of sounds from hip-hop, pop, jazz and R&B. After she listened a few times, Black noticed she was starting to remember key facts, dates and details from history. Could she be learning something new? 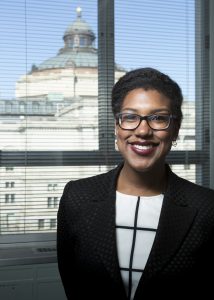 “When you hear a piece of art that’s based on historical fact, you always wonder how true is that, how real is that?” Black said. As she listened to the musical, “They would say things like ‘I wrote this letter’ … I was thinking, ‘Does that really exist?’ ”

The show’s creator, Lin-Manuel Miranda, consulted with Hamilton biographer Ron Chernow and Hamilton’s published works. But no one had traced the finished lyrics from the show back to Hamilton’s papers.

When the Library’s extensive collection of Alexander Hamilton’s papers were made available online for the first time last fall, Black embarked on a months-long effort to link the lyrics of “Hamilton” with the actual letters written by Hamilton, Thomas Jefferson and others. Over time, she pieced together a chronology—first on a color-coded spreadsheet and then in a PowerPoint presentation—that highlights lyrics based on documents for nearly every song in the show.

Piecing together the lyrics from “Hamilton” with original papers could be the basis for future programming and teaching tools. At least that’s the hope for Black and her team in Educational Outreach, who focus on teaching with primary sources. 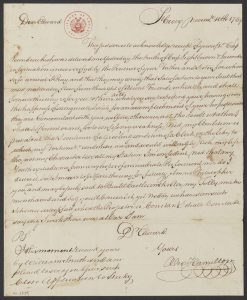 Lin-Manuel Miranda drew lyrics for the song “Right Hand Man” from this letter that Hamilton wrote as a boy in Saint Croix.

“We’re trying to make historical documents have a relevance and feel like living, breathing things that can be important now and can be used now,” Black said. The musical, with its diverse casting and innovative sounds, offers a new opportunity. “There’s definitely fidelity to the primary sources, but there’s also this new, fresh take that is trying to make it feel current and relevant to a 21st century world.”

The lyrics and letters are connected from the opening song, “Alexander Hamilton,” when the main character is introduced. First performed at the White House in 2009, the song includes details on Hamilton’s back story, growing up in poverty in Saint Croix and being orphaned at a young age.

As the song goes, “Then a hurricane came, and devastation reigned. Our man saw his future drip, drippin down the drain. Put a pencil to his temple, connected it to his brain, and he wrote his first refrain, a testament to his pain.”

Within the Hamilton papers, Black found the letter a young Hamilton had written to his father about the hurricane that was then published in the Royal American Danish Gazette. In it, Hamilton describes the destruction from the storm before he immigrates to New York City amid a revolution.

As Hamilton’s story develops, he falls in love and marries, and there’s a revelation he had an affair—as evidenced by his own written description.

“The Reynolds Pamphlet. Have you read this?” the lyrics go. “Alexander Hamilton had a torrid affair, and he wrote it down right there! Highlights: ‘The charge against me is in connection with one James Reynolds for purposes of improper speculation. My real crime is an amorous connection with his wife for a considerable time—with his knowing consent.’”

Black found the real Reynolds Pamphlet and compared the language. “From what I found, there are whole passages that are just taken verbatim,” she said. “That one stuck out.” 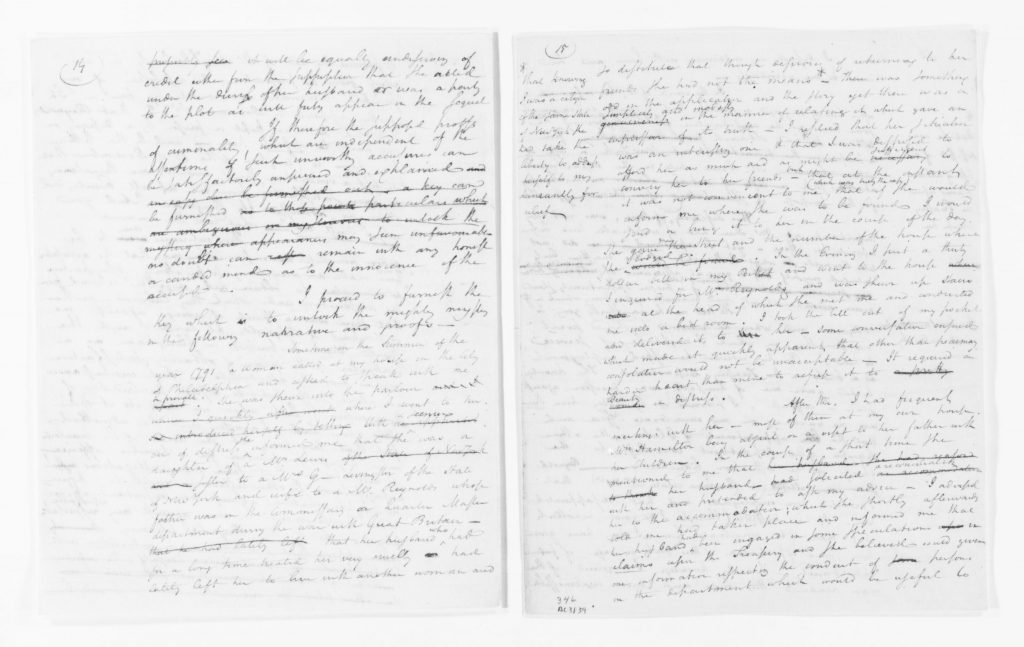 Pages from the “Reynolds Pamphlet.”

While part of the musical involves Hamilton’s personal story, it also delves into arguments over how the new Constitution should be shaped and what role the federal government should have. Hamilton anonymously wrote dozens of essays known as The Federalist Papers, defending the Constitution along with James Madison and John Jay.

Among the Library’s many documents are Jefferson’s personal copies of The Federalist Papers, which include his notes as he tallied which author had written which essay. This copy had been given to Jefferson by Elizabeth Schuyler Hamilton, none other than Alexander Hamilton’s wife.

“That’s the moment you think ‘I can’t believe we have this document here,’” Black said. “I’m really glad that’s been digitized because that means anyone can view that from anywhere.”

Lee Ann Potter, the Library’s director of Educational Outreach, said she is excited about Black’s research and the curiosity it may spark for students in the Library’s collections.

“I am convinced that harnessing the popularity of ‘Hamilton’ among young people will pique their curiosity about not only the Hamilton Papers, and how we know what we know, but other collections as well,” Potter said. “Perhaps a student who sees how the original documents inspired compelling lyrics will dig into some of those other documents and compose another great musical.”