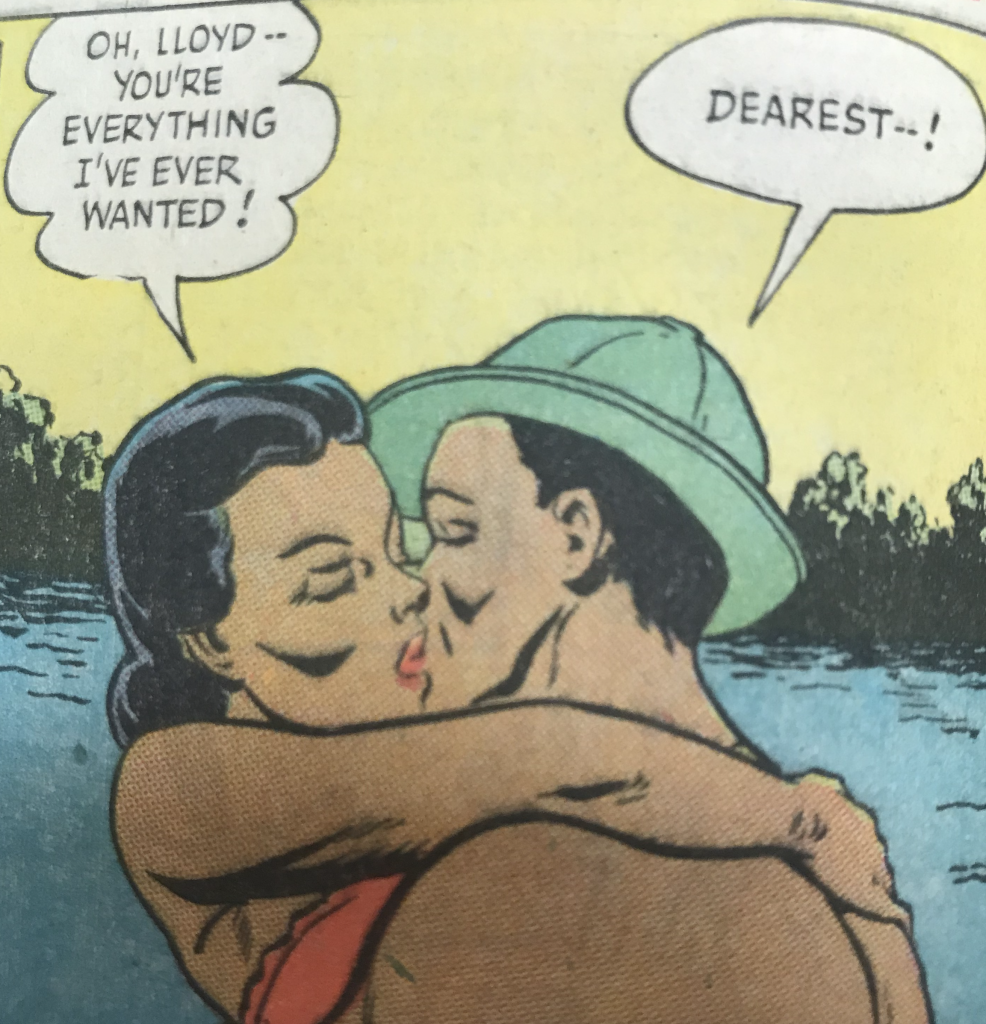 Hayley Salvatore, an intern in the Office of Communications, contributed to this post.

Gloria, pretty and hard-working, goes for a walk in a city park and meets kind and handsome Lloyd. Sparks fly! He takes her to meet her mom, who works nearby, then gently holds her hand, walking her home. Dinner, perhaps?

“I looked up into the tenderness of his eyes and my heart whispered a secret question,” Gloria wonders. “Had I really met this enchanting man only hours before – or was it a week – or a century?”

Such was the starry-eyed summer fling of “Negro Romance” — the only black romance comic ever printed between the 1930s and the 1950s, known as America’s Golden Age of Comics. It was startling and rare for its positive depiction of African Americans in the era, particularly in its portrayals of young black women as romantic heroines. But groundbreaking as it may have been, the magazine lasted just three issues in 1950 and then, with exception of one issue reprinted in 1954, almost completely disappeared from history.

So as Valentine’s Day approaches, we are delighted to report that the Library recently acquired issues of “Negro Romance” #2 and #3, thus completing the only known collection of all four issues. The comic is so rare – only two other libraries are known to have even a single copy – that Michelle Nolan, author of “Love on the Racks: A History of American Romance Comics,” estimated that “there are likely fewer than 50 copies extant of each issue” in a recent phone interview.

Megan Halsband, a reference librarian in the Serial and Government Publications Division who helped direct the acquisition, said the completed collection offers a unique look at America at mid-century. For example, there are few white people depicted in the comic, subtly documenting segregation. The comic, written by Roy Ald, who was white, and drawn by Alvin Hollingsworth, who was black, does not traffic in demeaning stereotypes, caricatures, or dialect, contrary to the prevailing norms in pop culture.

“The research value is extraordinary,” Halsband said, “because it’s so rare for positive representations of African Americas to appear in comic books during this period.”

The Library already holds the nation’s largest publicly available collection of comics, with some 12,000 titles and 150,000 issues. Finding all four issues of this comic took six years. Issue #1 was purchased in 2014. Issue #4 (the 1954 reprint) was included in the Stephen A. Geppi Collection, acquired in 2018. Then, last September, issues #2 and #3 surfaced at a New York-based auction house. The Library jumped at the opportunity, said Halsband.

Starting in March, the Library will display issue #1 in the exhibition “Comic Art: 120 Years of Panels and Pages.” 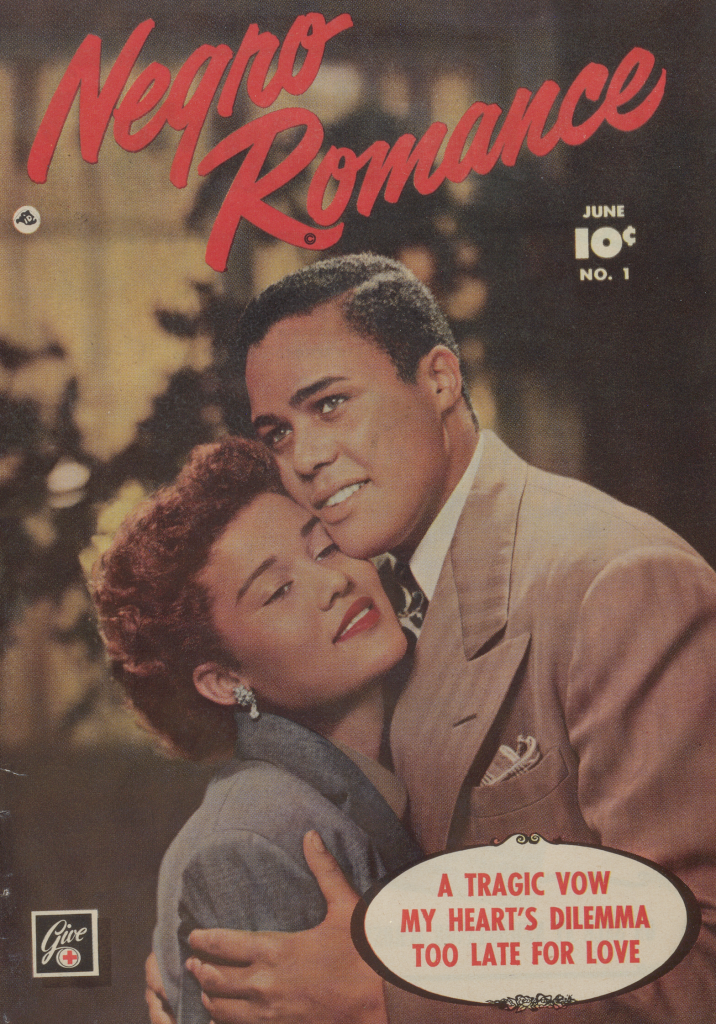 “Negro Romance” flickered into life during a rush of romance comics in 1950, as publishers such as Fawcett, Marvel and Fox sought to hook young adult female readers. After “Young Romance” started the genre in 1947, the field erupted into nearly 150 romance titles in the early months of 1950, Nolan writes in “Love on the Racks.” That equaled thousands of issues on newsstands and spinner racks at once. Amid this deluge, Fawcett came up with “Negro Romance” #1 in June, #2 in August and #3 in October.

Each 36-page issue featured a glossy cover photograph of an attractive, well-dressed young couple. Inside, on pulp paper, were three soap-opera tales of love, deceit, treachery and romance. With stories such as “Love’s Decoy,” “Possessed,” (that was Gloria and Lloyd), “Forever Yours” and “Spite!” it trod familiar territory– a handsome beau, a lithesome beauty and lots of drama. The difference was that the lovely dames and dashing gents were black, middle-class, bound for college or working professional jobs.

In a way, it was shocking.

Blacks, when mentioned at all, did not get such treatment in pop culture, still in the throes of the Jim Crow era. The Supreme Court case Brown v. Board of Education, which struck down legalized segregation, was still four years away.

Qiana J. Whitted, author of “EC Comics: Race, Shock, and Social Protest” and director of African American Studies at the University of South Carolina, notes that racism was brutal in comics of the era. There were the “savage” Africans featured in Tarzan and other jungle comics. Captain Marvel had a sometime sidekick named Steamboat, who had huge pink lips and spoke in dialect. “Li’l Eightball,” a caricature of a coal-black child (again, with the lips) who appeared in “New Funnies,” was so offensive that even schoolchildren complained, ending its run.

Still, there were larger cultural forces at work. The preceding decade had seen black authors have unprecedented success, as Richard Wright and Ann Petry had runaway bestsellers with “Native Son” and “The Street,” respectively. Black newspapers were thriving, including comic strips with black characters. Magazine publisher John H. Johnson started his iconic “Ebony” in 1945. Jackie Robinson and Joe Louis were two of the biggest sports stars of the age and each had a short-run comic devoted to their bios. All-Negro Comics, the first comic book by an all-black staff, ran for one issue in 1947. It would be another 45 years before another comic with all black creators was published by Milestone Comics in 1993.

So, while pop culture was very much segregated, publishers understood that black readers were out there. Their plan, Whitted notes, was to take established genres – sports, romance – “and see if we can reach out to black audiences who we know already buy our comics, but don’t have titles targeted to them,” she said.

No one now knows how many copies were printed of “Negro Romance” or where they were distributed. There is no apparent mention of it in contemporaneous literature, journalism or personal memoirs. 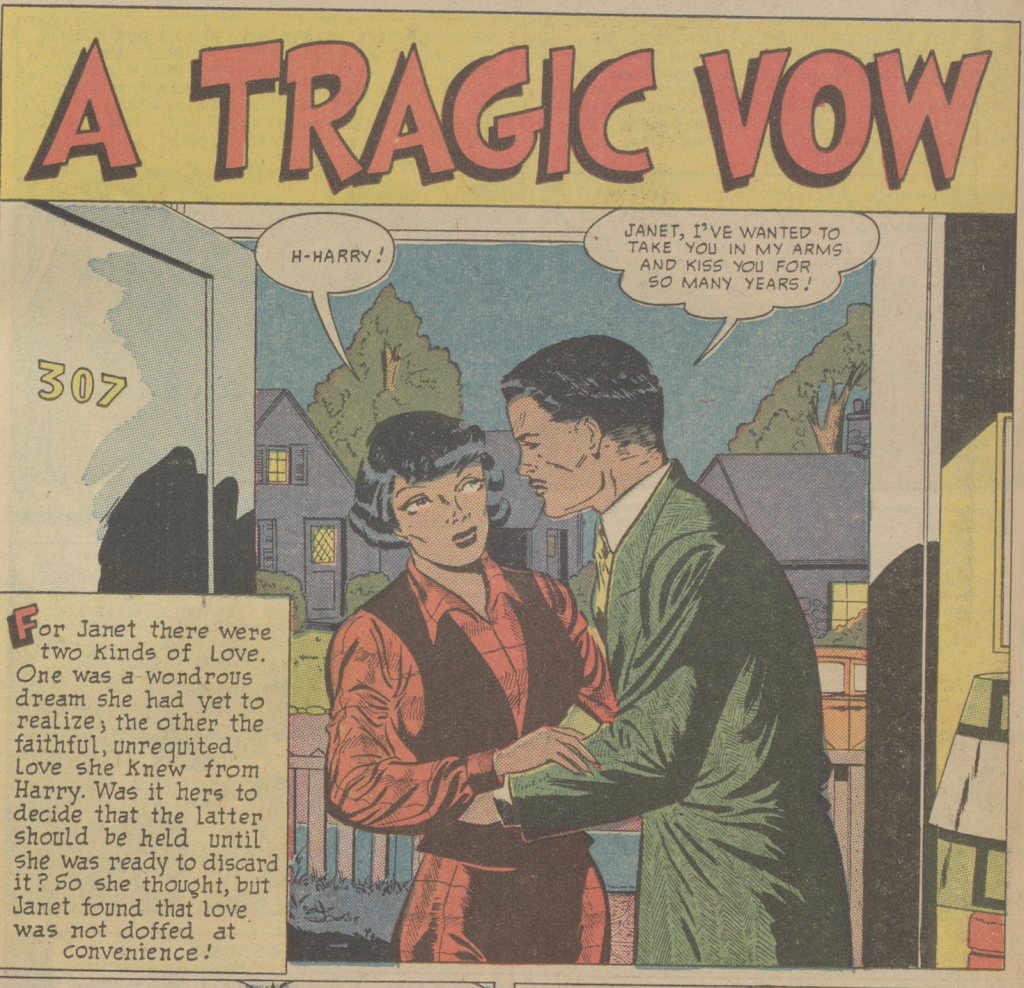 Still, it’s clear that the stars did not align for “Negro Romance” in the tempestuous world of comics, where few titles ever made it past a dozen issues. Of the 147 romance titles published in the early part of 1950, at least 117 were dead before the end of the year, Nolan writes. Fawcett started four romance titles that summer. None survived past autumn.

Still, it’s nice to think that 70 years after Gloria and Lloyd fell in panel-by-panel love, the short-lived adventure that was “Negro Romance” has finally found a happily-ever-after home of its own.