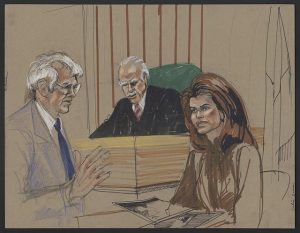 (The following is an excerpt from an article by Sara W. Duke from the May/June 2017 issue of LCM, the Library of Congress Magazine. Duke, curator of popular and applied graphic art, writes about how courtroom illustrations capture the styles of the times in which cases are heard. Read the entire May/June issue here.)

“Drawing Justice: The Art of Courtroom Illustration,” a new exhibition at the Library of Congress, showcases the Library’s extensive collections of original art by talented artists hired by both newspapers and television to capture the personal dynamics of legal trials. Skilled at quickly conveying both individual likenesses and the atmosphere of the courtroom, these artists reveal, in intimate detail, the dramatic and, at times, mundane aspects of trial proceedings. Artists often pay attention to details like understated dress, expensive suits, a stylish hat, or clothing more appropriate for a party than a sentencing, offering insight into changing trends in fashion.

Jacqueline Kennedy Onassis returned to court in 1982, having already sued paparazzo photographer Ron Galella, arguing he was in contempt of a 1975 court order. Here, Galella’s lawyer Marvin Mitchelson interrogates her, while Judge Irving Ben Cooper presides. Cooper argued that Galella was not going to change his behavior voluntarily, and it was therefore necessary to “positively and effectively stop Galella’s unbridled behavior” by penalizing him for his contempt of the court’s 1975 order. Marilyn Church, who drew the former first lady, wrote, “Oddly, there was little evidence of the high-fashion elegance that she was so famous for. Most days she wore the same brown blouse to court, a garment made of synthetic fibers that had seen better days.”

In 2004, Martha Stewart and her former Merrill Lynch stockbroker, Peter Bacanovic, went to trial on charges of securities fraud and obstruction of justice at the U.S. District Court in Manhattan. A former stockbroker herself, Stewart chose an understated outfit as she listened to the testimony of Merrill Lynch employee Brian Schimpfhauser, as her defense attorney Robert Morvillo stood by. Judge Miriam Goldman Cedarbaum presided over the U.S. District Court for the Southern District of New York in Manhattan. On March 5, 2004, the jury found Stewart and Bacanovic guilty. Stewart served five months in Federal Prison Camp Alderson in West Virginia and an additional two years of supervised release, which allowed her to return to her business empire. 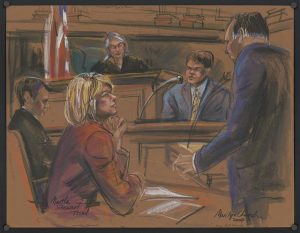 Flamboyant crime boss John Gotti, “the Dapper Don,” faced trial on several occasions. In 1992, he appeared in United States v. John Gotti and Frank Locascio in the U.S. District Court in Brooklyn. Gotti, sporting a red tie and handkerchief, sits next to his attorney, Ken Kukec. Defense attorney Albert Krieger hands Anthony M. Cardinale, another defense attorney, papers, while Murray Appleman, the sole witness for the defense, testifies. Judge I. Leo Glasser leans forward to listen. When his second in command, Salvatore “The Bull” Gravano, turned on him and became a government witness, Gotti was convicted on charges of murder, racketeering, obstruction of justice, illegal gambling, tax evasion and loan-sharking. He died of throat cancer in 2002, while serving a life sentence in prison in Springfield, Missouri. 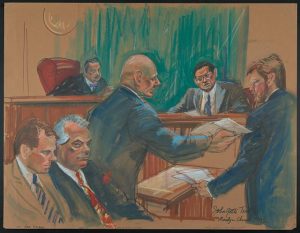 In a 10-minute hearing on July 19, 1985, in the New York State Supreme Court in Manhattan, Sydney Biddle Barrows, dubbed the “Mayflower Madam” for her patrician bloodline, pled guilty to a misdemeanor charge of promoting prostitution. For artist Aggie Kenny, the hat became the focus of her drawing: “[It] gave shape to the face.” Barrows’s plea followed a week of negotiations between her lawyers and the prosecutors after an order by Judge Brenda Soloff would have required information about each charge to be made public. Barrows was fined $5,000 for the crime. 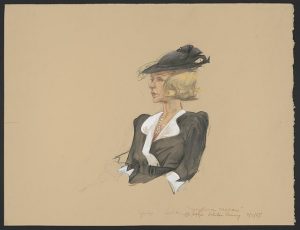