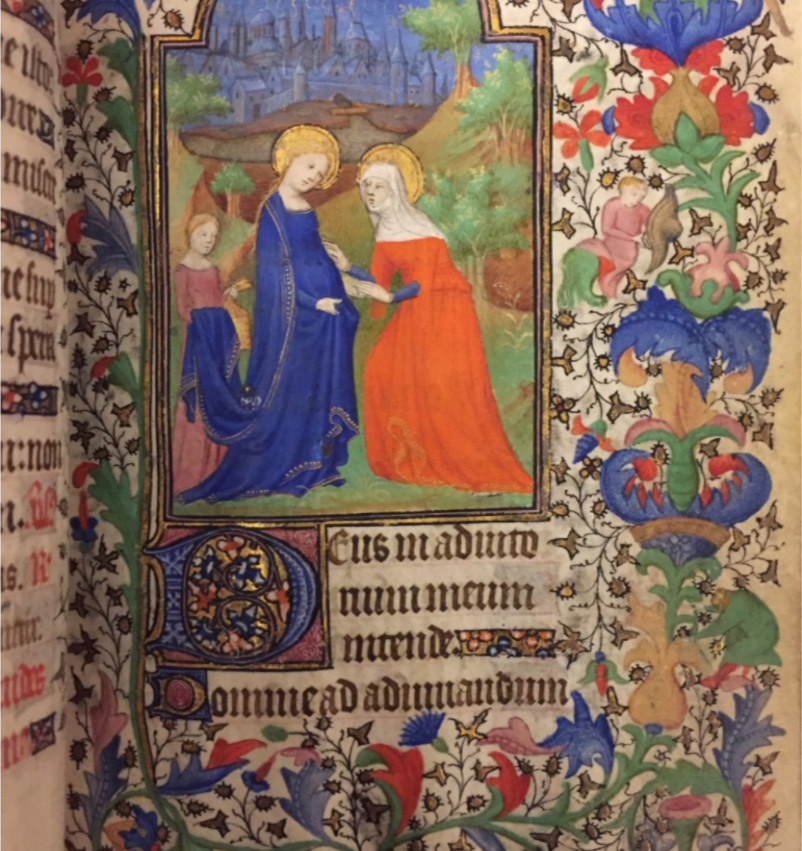 Detail from the “Book of Hours.” published in France, circa 1420. Rare Books and Special Collections Division.

This is a guest post by Marianna Stell, a reference assistant in the Rare Book and Special Collections Division. It appeared earlier this year in the Library of Congress Magazine.

Like contemporary digital interfaces, medieval manuscripts anticipate an engaged user. Imagine that you are viewing a well-designed webpage from behind the glass of a museum case. The glass would prevent you from interacting with the page as the designer intended. You would be an observer, not a user.

Viewing a medieval manuscript without information about its historical context can be a similarly limited experience. Medieval manuscripts are not static products. Like a website, a manuscript realizes its purpose in its dynamic engagement with its user. Rather than simply instructing readers, a manuscript’s compositional program is designed to move viewers to some action. The nature of the action depends upon the context for which the manuscript was created to function.

An illuminated prayer book, like the one by the Boucicault Master pictured above, is designed to catch the user’s attention. Light dances off the many flecks of gold leaf used in the borders and the miniatures, catching the eye of the reader with even the smallest motion and making the page appear as though it is illumined from within. Books of Hours like this one were created to allow laypersons to participate in the cycle of prayers that priests and monastic orders kept. The program of images and words connected domestic habits to the larger rhythms of the church festival calendar and the cycle of the seasons.

Not all medieval manuscripts were created for a ritual context, however. Some manuscripts were created to prompt mental rather than physical engagement. Manuscripts created for personal study assumed use in the active theater of the reader’s mind. A 15th-century encyclopedic manuscript in the Rosenwald Collection contains compositions that are built to generate mental associations. The design is a testament to the medieval creator’s ability to nest layers of information into a central image so that the reader might more easily remember the content. 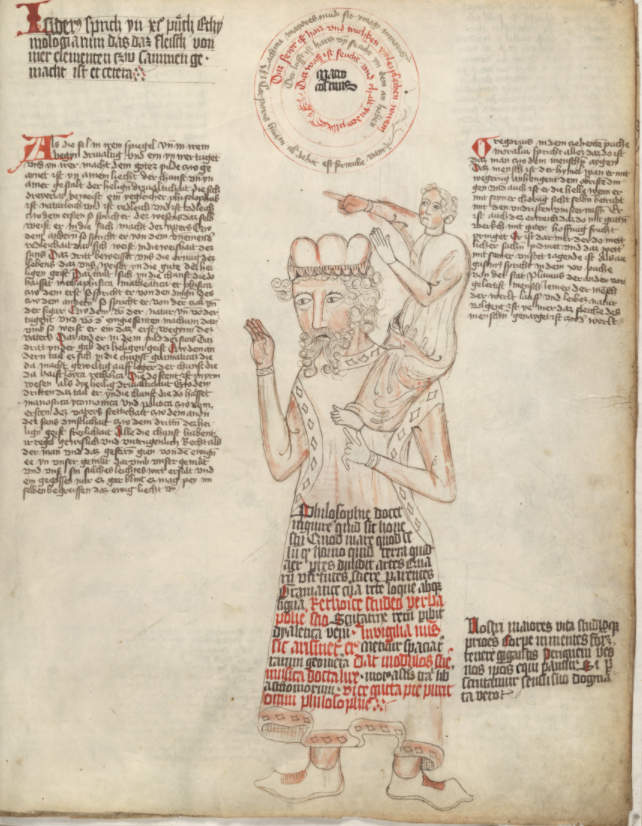 This medieval manuscript references a metaphor that scholars ride on the shoulders of their mightier predecessors. Germany, circa 1410. Rare Books and Special Collections Division.

A 15th-century reader would recognize an image of what looks to be a piggyback ride as referring to a famous metaphor attributed to Bernard of Chartres, who claimed that modern scholars (i.e., those working around 1150 A.D.) are like dwarves being carried by giants. The modern scholar can see further into the horizon only because the ancients, like the giant, have given him a leg up. Modern knowledge therefore rests in a privileged position only because of those giants who wrote and studied beforehand. Illustrating this point, the giant’s surcoat (what we’d call an overcoat today) is inscribed with references to the seven liberal arts, which the medieval educational system inherited from the Romans.

The design of the composition moves the reader around in a circle, like the one labeled “macrocosm” above the head of the dwarf. By following the internal itinerary of the page, the reader actively experiences and internalizes its informational content. In so doing the reader becomes part of the manuscript’s larger message: Each human being is a microcosm of the greater macrocosm of the universe.

For those of us studying book arts in the digital age, we are the dwarves and the medieval manuscript designers are our giants.