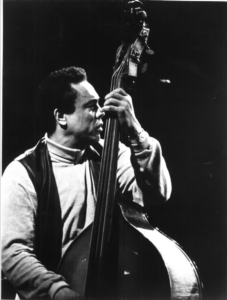 The following is a guest post by Music Division archivist Dr. Stephanie Akau; it originally appeared on the In the Muse blog.

The Library was delighted to recently welcome four additional holograph manuscript scores of Charles Mingus, the legendary jazz double bassist, pianist, composer and bandleader, to our existing collection of his life’s work.

They came as a gift from Sue Mingus, his widow. I recently reprocessed them with processing technician Pam Murrell. The scores that comprise this gift are “Alive and Living in Dukeland,” “Three or Four Shades of Blues,” “Cumbia and Jazz Fusion” and “Todo Modo.”

“Alive and Living in Dukeland” is one of many of Mingus’s tributes to Duke Ellington, who had an enormous influence on Mingus and countless other musicians. Mingus performed briefly with Ellington’s band before a physical altercation with trombonist Juan Tizol lead to his dismissal in 1953.

Mingus composed and recorded the other three charts, “Three or Four Shades of Blues,” “Cumbia and Jazz Fusion,” and “Todo Modo” in the mid-1970s, shortly before he died from complications of amyotrophic lateral sclerosis (ALS). “Three or Four Shades of Blues” was the title track of an album assembled from March 1977 recording sessions under a contract from Atlantic Records.

The other pieces on the LP are “Noddin’ Ya Head Blues” and “Nobody Knows,” along with Paul Jeffrey’s new arrangements of Mingus standards “Better Git Hit in Your Soul,” and “Goodbye Pork Pie Hat.” Mingus responded negatively to the “Three or Four Shades of Blues” LP but listeners loved it; the album sold 50,000 copies in just two months. It was a Cadence magazine Editor’s Choice for one of the top albums of 1977, a list that included Cecil Taylor’s “Dark to Themselves,” Gerry Mulligan’s “Idol Gossip,” Dexter Gordon’s “Swiss Nights,” and the reissue of the Red Norvo Trio with [Tal] Farlow and Mingus.

The 1977 Atlantic Records contract allowed Mingus to expand his ensemble for “Cumbia and Jazz Fusion,” which is nearly a half-hour long and takes up the entire side of an LP. The recording features congas and South American percussion, and the ensemble even includes a bassoonist, Gene Scholtes. The score is comprehensive and a listener can follow along with the recording.

“Todo Modo” is on the flipside of the “Cumbia” LP. Mingus had written the music for director Elio Petri’s 1976 film “Todo Modo,” also known as “One Way or Another” in the United States (not to be confused with the Blondie song released a couple years later). However, Petri did not use Mingus’s music or his arrangements for the film. Instead, he asked Ennio Morricone to compose a new soundtrack. Critics enjoyed the Cumbia/Todo Modo album, one writing that Mingus was “a national treasure” and that “ ‘Todo Modo’…swing[s], struts, sings and sighs.” 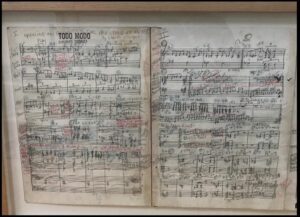 The condensed scores are heavily annotated with instrumentation notes, as shown in the photo of “Todo Modo,” and performance directions explaining who is supposed to solo and when, seen in “Cumbia and Fusion.” 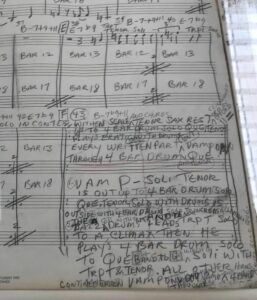 The annotations provide a glimpse into Mingus’s compositional process. The collective improvisation, in which more than one person improvised at a time, that characterized his music may sound chaotic at times, but these scores demonstrate how clearly Mingus conceived of a piece’s structure. They are a welcome addition to the collection!

When the Library is once again open to the public, the Charles Mingus Collection is available for research in the Performing Arts Reading Room. For more In the Muse posts about Mingus, see Pat Padua’s “Meditations on Mingus” and Pam Murrell’s “The Thingus About Mingus”.