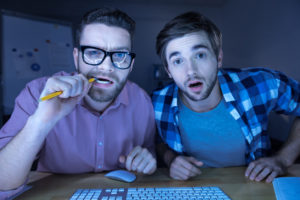 Gray-haired folk have long held “most scammed” status, but it may be time to pass on that unfortunate legacy. While the retirement-aged are targeted most often, increasing data shows that it’s millennials — our children and grandchildren ages 18 to 35 — who are most likely to lose money to fraudsters. Consider these recent findings:

Phone scams. About 1 in 10 American adults lost an estimated $9.5 billon to phone scams last year. Leading the pack were millennial men between ages 18 and 34, who were three times more likely to be victimized than the overall population, reports mobile communications company Truecaller, which offers a spam-blocking phone app. Its Harris-conducted survey of 2,000 adults finds that 33 percent of male mills report losing money to phone scammers; that compares to just 3 percent of males between ages 55 and 64 and 1 percent of men 65 and older. Meanwhile, some 11 percent of female millennials got duped, four times the rate of women 55 and older.

IRS imposter scams. Among the scariest and most successful phone scams: calls from self-described IRS agents threatening arrest, property seizure or deportation. Although millennials are less likely than Gen Xers (born between 1965 and 1984) or boomers (born 1946 to 1964) to receive tax scam calls, they are six times more likely to reveal credit card and Social Security numbers and other sensitive information, finds another just-released survey of 1,000 adults. Roughly 17 percent of millennials confessed that they had forked over ID theft-worthy details to mystery callers who could cite the last four digits of their Social Security number (as tax scammers often do), compared to only 3 percent of Gen Xers and 2 percent of boomers.

Job scams. Overall, about 1 in 6 job seekers have been scammed while searching for work online, and the highest gotcha rate is among that generation considered the most tech-savvy — millennials. In a 2015 survey of 2,600 American adults, job-search website FlexJobs finds that 20 percent of millennial job seekers got scammed, compared to 13 percent of those in their 60s.

Everyday fraud. In its own research of more than 2,000 adults last year, the Better Business Bureau finds that some 30 percent of those between ages 25 and 34 lost money to scammers; it’s only single digits among those 55 and older.

What explains these trends? As experts continue to study the “whys,” the leading theories: