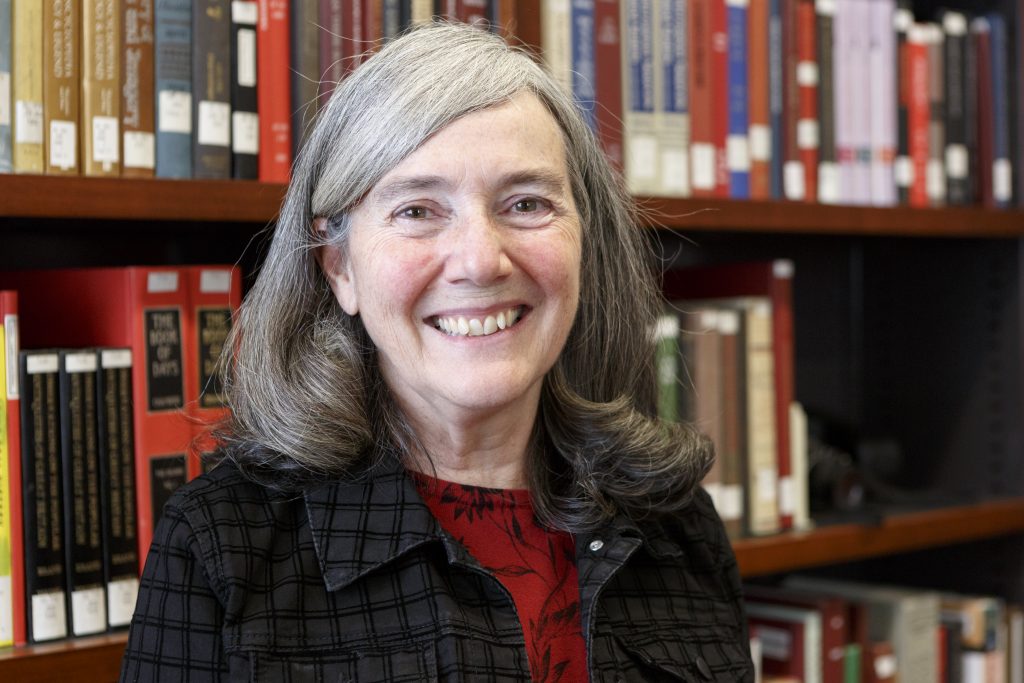 Margaret “Maggie” Kruesi is the first and, so far, the only cataloger to work at the Library’s American Folklife Center (AFC). Before starting in 2004, she earned a Ph.D. in folklore from the University of Pennsylvania and acquired considerable experience cataloging and otherwise processing archival collections at Penn’s Van Pelt Library. She will retire from the Library this month, having created close to 3,000 collection-level catalog records for the AFC’s one-of-a-kind ethnographic collections, plus more than 12,000 integrated-library-system records for items and interviews. Here she reflects on her career and her contributions toward raising awareness of the AFC’s collections.

Where did you grow up, and what’s your educational background?
My father was a research scientist, a chemist and a metallurgist, and my family lived in different places. I was the eldest of five children. I was born in Boston, but my earliest memories are of 17-year locusts coming to the suburb of Chicago where we had moved. As well, I have strong childhood memories of exploring the woods of the Appalachian Mountains, near Chattanooga, where we also lived. Other early memories are about learning to sail on the Hudson River, north of New York City. When I was 16, my family moved to Colorado and, in due course, I attended Montana State University in Bozeman.

What came first — your interest in folklore or librarianship?
My interest in folklore. I loved music, especially singing, as a child. My mother had a book of ballads in her piano bench, and my father had a large collection of records of ballad singing. I first met a folklorist at a symposium in 1979, and I learned from her that one could study folklore in graduate school. I had earned a B.A. in English and was applying to graduate schools. But after becoming aware of the academic field of folklore, I decided to apply to the Department of Folklore and Folklife at the University of Pennsylvania. I was accepted and subsequently studied with a number a prominent folklorists and anthropologists.

What led you to librarianship?
Necessity! I needed a job, and a friend told me about a $10-an-hour job in Penn’s library that involved unpacking and processing a manuscript collection. I immediately found out that I loved this kind of work, and one project led to another. I should note that I have librarians in my family. My mother received her library degree when I was in college, and my cousin worked at the National Library of Medicine for her whole career.

One of the first jobs I had was at the University of Pennsylvania’s Rare Book and Manuscript Library. I was hired through a grant to work on Marian Anderson’s papers. I processed the singer’s papers, wrote a finding aid and learned MARC cataloging. On another grant-funded project, I cataloged codex manuscripts from the late medieval, Renaissance and early modern periods.

What drew you to the Library?
The chance to work as a cataloger in the AFC was wonderful. After working as a librarian and manuscripts cataloger, it was also an opportunity to work as a folklorist again. I was aware of the AFC, including its important field-documentation projects and ethnographic collections, but I never dreamed I would be able to work here.

Tell us about some memorable projects or contributions.
Cataloging AFC’s wax-cylinder recordings, some of which date to 1890, stands out. They are the world’s earliest ethnographic audio recordings. A recent project, “Ancestral Voices,” is also memorable. It involves working with Maine’s Passamaquoddy tribe, whose ancestors’ stories and songs were recorded by the anthropologist Jesse Walter Fewkes. Also memorable is the AFC’s field school for cultural documentation, through which I’ve shared my knowledge of archival best-practice with budding folklorists and other young cultural specialists around the country.

What I’m most proud of is cataloging almost 90 percent of the AFC’s collections, working on the Civil Rights History Project and making our Native American collections accessible to communities of origin.

Tell us something about yourself most people don’t know.
My great-grandfather John Kruesi, an immigrant from Switzerland, was a member of Thomas Edison’s team at Menlo Park, and he built Edison’s first phonograph. The earliest ethnographic cylinder recordings were made with one of those machines, enabling Native people to maintain and revitalize their languages. My work at the Library has been all the more meaningful because of this personal connection. Another thing that most people don’t know about me is that, since 2002, I have been passionately devoted to wildlife conservation in Costa Rica, particularly the conservation of sea turtles. I have started an oral history project to interview sea-turtle biologists, many of whom are women who work in indigenous and local communities around the world to save the endangered species.