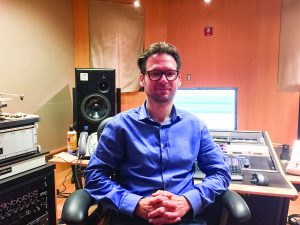 Bryan Hoffa discusses his work at the Library’s Audio-Visual Conservation Center. This post was first published in LCM, the Library of Congress Magazine. “My Job” is a regular feature in the magazine, issues of which are available in their entirety online.

How would you describe your work at the Library?
My job at the Library’s Packard Campus for Audio-Visual Conservation in Culpeper, Virginia, is to digitally preserve and archive the incredible recorded sound collections held by the Library’s Motion Picture, Broadcasting and Recorded Sound Division and the American Folklife Center. For the vast majority of physical audio formats such as wax cylinders, grooved discs, magnetic tape and so on, this process is preservation reformatting—transferring audio from fragile or obsolete formats to more stable ones. In a real-time transfer process, I create high-resolution wave files at archival specifications. Getting the most audio information out of each format during transfer is crucial. I also collect descriptive metadata about the content of the recording as well as technical information carrying over from the original recording and information about the transfer process and equipment. I’m fortunate to be able to work with top-notch gear!

How did you prepare for your current position?
I first became interested in recording as a musician. I secured an internship at a very well-regarded studio and was mentored by some of the best in the business. I spent the next 10 years learning on the job as a full-time recording and mixing engineer. In early 2007, a fire in a connected building caused smoke and water damage that necessitated closing the business immediately. What happened next foreshadowed my current position.

First, I led a disaster-recovery effort at the studio to save analog master tapes from water damage. Then I landed a part-time position at the Library of Virginia. This was a grant-funded project to complete the ongoing digitization of a large radio collection, documenting the history and operations of historic WRVA radio. In 2008, I heard about an opening at the Library’s brand new state-of-the-art facility in Culpeper, Virginia. The rest is history!

How has technology changed the field of audio preservation?
Technology has always pushed the evolution of audio preservation from the earliest days, when Thomas Edison’s inventions enabled the preservation of the human voice. New technologies have brought improvements that were not thought possible. The biggest shift in audio preservation in my lifetime is file-based digital audio. Up to this point, you would take one object that has a known, limited lifespan and copy it to another object with other inherent problems. Files give us the ability to transcend physical limitations and make unlimited, “bit perfect” copies. This is a game-changer, especially for access. However, it’s not without its own challenges. So much more born-digital content is being created than ever before. Guaranteeing long-term preservation requires massive information technology architectures. Data must be verified and migrated to ensure its longevity and security. Metadata, which used to be handwritten on labels, now lives in databases. At the Library’s state-of-the art facility, we are addressing these issues on a large scale.

What are some of the most memorable audio collections you have worked on?
One collection that really stands out to me is the Universal Music Group’s 2011 donation of more than 200,000 historic recordings. They include master recordings on the Decca label of Bill Monroe, Ella Fitzgerald and Sister Rosetta Tharpe, to name just a few. They sound fantastic, as if they had just been cut yesterday.

I’ve also had the chance to work on the Les Paul Collection, preserving some of the master guitarist’s earliest multitrack recording experiments on disc. Some of these became his first singles for Capitol Records.