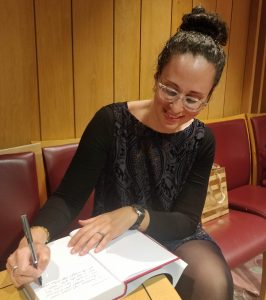 Victoria Van Hyning is a senior innovation specialist and a community manager for the Library’s By the People crowdsourcing project. Her academic studies focused on medieval and Renaissance English literature and the fate of British nuns after the Reformation. Her book on this research, “Convent Autobiography: Early Modern English Nuns in Exile” was recently published by Oxford University Press. Intrigued, we asked how this background led to her work at the Library.

In college, you read “A Revelation of Love” by Julian of Norwich, a 14th century ascetic who wrote about the religious visions she had while seriously ill. It’s one of the oldest known works by a woman in the English language, if not the oldest. What about it spoke to you?

I was fascinated that Julian lived most of her life in solitude as an anchoress—paradoxically withdrawing from the world to make it a better place by trying to understand her visions. She portrays a maternal God, who loves humanity despite sin. This interested me as someone who grew up attending a fairly relaxed Quaker meeting where sin was not emphasized. Her famous phrase, “al shall be wele, and al shall be wele, and all manner thing shal be wele,” has appealed to readers for nearly six centuries.

In college, I spent a year studying at Oxford, learning about Julian with a world-class expert. It was a life-changing experience. I went back to Oxford for a master’s, which led to a Ph.D. at the University of Sheffield. I focused on the Catholic nuns and monks who read Julian’s texts after the Reformation and saved them from obscurity by copying them out by hand.

The English nuns you write about went into exile after the Reformation in the 16th century, when it became more or less illegal to practice Catholicism in England. Where did they go? What did they do?

Some women returned to their families, perhaps practicing a quasi-monastic life at home, while others joined Flemish, French, Italian, Spanish or other convents abroad. Only one English community—the Bridgettines — managed to resist closure.

Over time, though, many English women wanted to create English or Irish convents. Between 1598 and the French Revolution, 26 convents were established, including one in Maryland. (A descendant community of Carmelite nuns is still in Towson.) These new communities were of a variety of orders—Benedictine, Augustinian, Carmelite. The Augustinians I write about were fairly international, multilingual and musical. Travelers would make a point of stopping at their convents during their jaunts across Europe.

In some ways, convents walled off these women from the rest of the world, but in other ways, they allowed them an intellectual and theological freedom they probably wouldn’t have had on the outside. Given this, what did they write about? 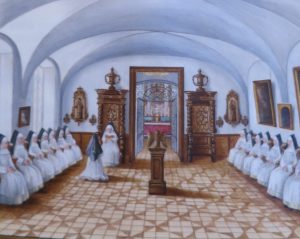 Convent illustration from the English Convent of Nazareth, Bruges. Created in the 20th century but in a medieval style. Photo: Victoria Van Hyning.

Nuns still had a lot of contact with clergy and outsiders. They could read, write, compose music and teach. They could write translations, spiritual advice manuals, original prayers, devotional poetry, one or two personal letters per year and so on. Senior nuns typically took responsibility for writing the chronicles, which were important historical documents about the community as a whole. Those who wrote anonymously—and most did—could safely write about themselves in great detail without seeming immodest. I argue in the book that anonymity was liberating.

There was sanctity and seriousness, but there was joy and laughter, too. And sarcasm. And pragmatism. Many of these women were smart — capable of wringing funds from reluctant or distracted donors, capable of fending off clerics and government officials. This comes through in their chronicles, letters, and other literature.

They also held jubilees to mark special occasions or anniversaries. One prioress-chronicler describes the Bruges convent’s centenary, for which there were special masses and prayers, an original play by the convent novices and school kids. The nuns also provided bread and beer to their neighbors and the city’s poor, and were delighted – and maybe a little freaked out — when their neighbors set off blank canons from the top of the convent walls and held a raucous street party on the other side. 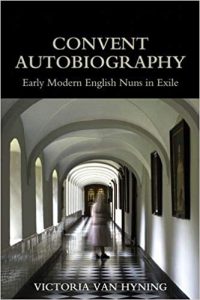 How did your research for the book lead you into crowdsourcing?

During my Ph.D., I did research in monastic archives all over England, France, and Belgium. Several monastic communities allowed me to photograph hundreds of their manuscripts and books, which greatly aided me and an informal network of convents, scholars and genealogists to transcribe and share those documents. This archival work led me to think volunteers could help with transcriptions.

I then got involved in crowdsourcing with a group called Zooniverse in the Department of Astrophysics at Oxford. I expanded their humanities program, helped develop news transcription methods and led the development of a Renaissance manuscript transcription project called “Shakespeare’s World” with the Folger Shakespeare Library and Oxford English Dictionary. From 2016 to 2018, I led the project “Transforming Libraries and Archives Through Crowdsourcing.” Much though I loved Zooniverse and the work I did there, when this job at the Library came up I couldn’t resist!

So what’s your work like here at the Library.

As the community manager for collections and data, I work with the By the People team, curators and educators to identify and present collections in ways that appeal to volunteers, while also generating high quality transcription data. We started out as a pilot project in October 2018 and graduated to being a permanent project in early 2020.

Our team has designed and launched 15 collections-based campaigns in a year and a half. These feature the papers of Rosa Parks; letters sent to President Lincoln; the papers of suffrage leaders Mary Church Terrell and Susan B. Anthony; and the field notebooks of ethno-musicologist Alan Lomax, among others. Volunteers have transcribed over 113,000 pages so far, which is a testament to their enthusiasm!