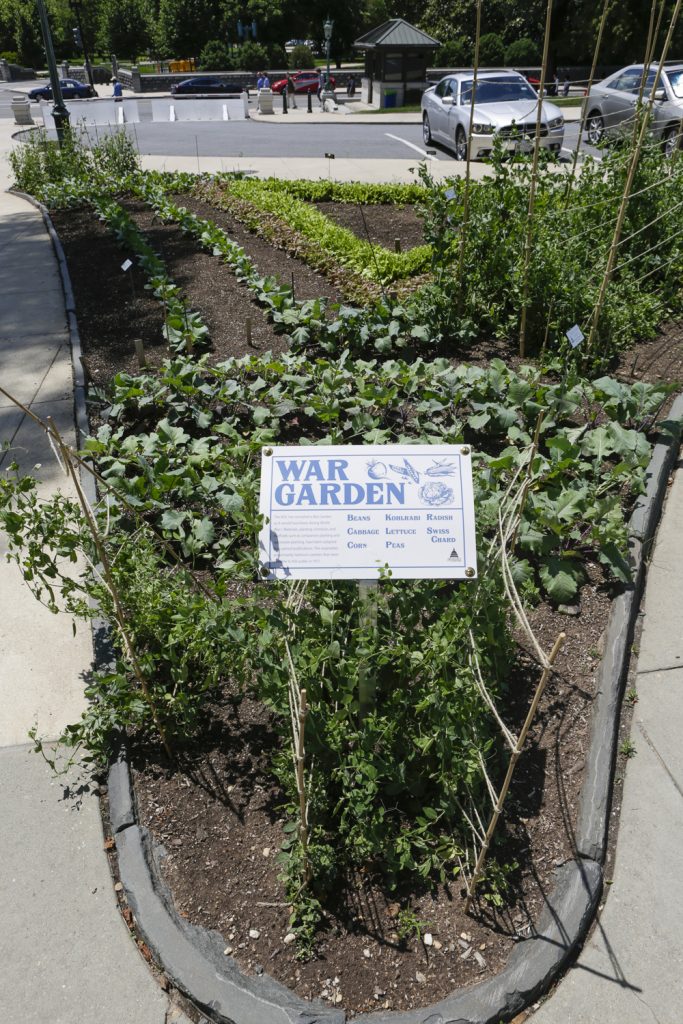 (The following is an article by Erin Allen from the May/June 2017 issue of LCM, the Library of Congress Magazine. Read the entire issue here.)

A vegetable garden commemorating the victory gardens of World War I grows outside the Thomas Jefferson Building of the Library of Congress. Photo by Shawn Miller.

April showers bring May flowers, but it’s the summer months that give green thumbs a chance to cultivate, nurture and experiment.

National Garden Clubs Inc. has proclaimed June 4–11, 2017, as National Garden Week. The Library of Congress is following the gardening trend, collaborating with the Architect of the Capitol (AOC) to plant a series of “victory gardens” in commemoration of the centennial of America’s entrance into World War I.

According to Robert Gimpel, a gardener with the AOC, “War gardens were the brainchild of Charles Lothrop Pack and his National War Garden Commission. During the war, a severe food crisis emerged in Europe, as farmworkers enlisted in the military and agricultural lands became battlefields. The National War Garden Commission was organized to increase the food supply for civilians through home gardening.”

The gardens are featured on the grounds of the Thomas Jefferson Building and highlight heirloom varieties of vegetables available during the war years. Today, cities across the United States are continuing this tradition with school and community garden programs. 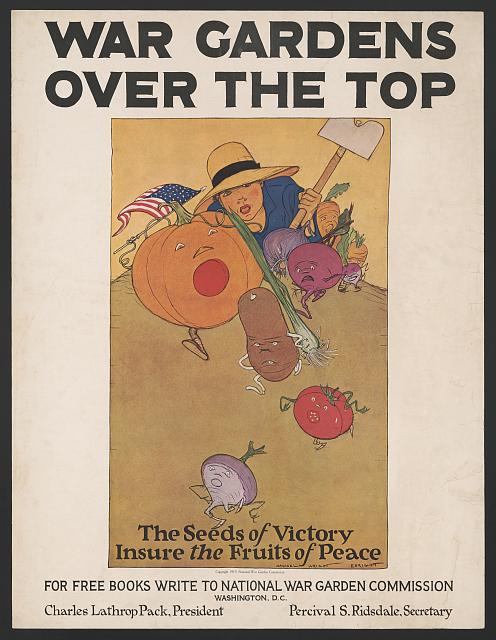 This 1919 poster by Maginel Wright Enright was created as part of the National War Garden Commission’s campaign to encourage Americans to raise more food on their own.

During WWI, Maginel Wright Enright, sister of Frank Lloyd Wright, designed a series of posters for the U.S. School Garden Army (part of the National War Garden Commission). This national campaign was launched in 1917 to increase the food supply. Secretary of the Interior Frederick Lane wrote of one of her posters, “I am sure a great many children will find their hearts stirred by the picture, and no older person can look at it without a thrill of loyalty and desire to do his part.”

If horticulturists are considered the ultimate gardeners and architectural landscaping the ultimate garden, the Library’s collections are very representative of both disciplines. Considered the father of landscape architecture, Frederick Law Olmsted is best remembered for his design of the U.S. Capitol grounds, and his career is documented in his personal papers, as well as those of his architectural firm, held in the Manuscript Division. The Science, Technology and Business Division also offers various reference guides on gardening and horticulture.

“Garden and Forest: A Journal of Horticulture, Landscape Art, and Forestry” was the first digital reformatting project done by the Preservation Reformatting Division. It was also the first serial digitized in its entirety by the Library. “Garden and Forest” was the first American journal devoted to horticulture, botany, landscape design and preservation, national and urban park development, scientific forestry, and the conservation of forest resources in the late 19th century.