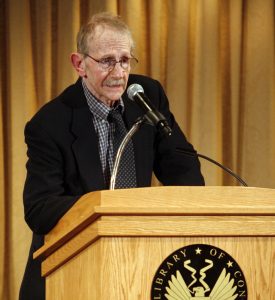 The following is a guest post by Anastasia Nikolis, a graduate student intern in the Poetry and Literature Center and a doctoral candidate in the English department at the University of Rochester.

Happy National Poetry Month! I hope you are all as excited to celebrate as we are here at the Poetry and Literature Center.

Conceived of in 1940 and kicked off in 1941 with a lecture by Robinson Jeffers titled “The Poet in a Democracy,” the archive began as a national culture-building project in response to the pressures of World War II—in particular, to the rise of European fascist rhetoric. The hope was to capture the voices of an elite class of poets and then make that elite content democratic by increasing access to it through dissemination of the recordings. The underlying message was that American literature could spread as far as fascist propaganda, but even more effectively.

Furthermore, to close the divide between practicing poets and the cloistered academics who studied poetry, Librarian of Congress (and poet!) Archibald MacLeish intended to promote young poets “who should have some attention and are usually ignored” in favor of more established poets, and “make albums from time to time which [the Library] could sell to the many schools, colleges and interested individuals” 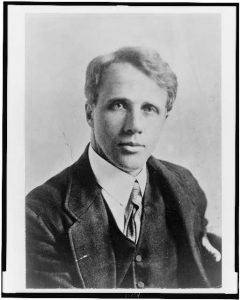 Portrait of Robert Frost, the 1958–59 poet laureate consultant in poetry.

The advancement of recording technology meant that you didn’t have to be in Washington, D.C., or New York to hear great poets like Robert Frost, E. E. Cummings, Edna St. Vincent Millay, Conrad Aiken—you could buy the record and listen to them anywhere. Today, the technology is even better, since you can just stream the recording right from your home computer at no cost at all.

Over the course of its more than 75-year history, the Archive of Recorded Poetry and Literature has expanded its mission, amplifying voices of women and writers of color to make the poetry community even more inclusive, which you will see in the selection of recordings chosen for this month’s release.

Fifty recordings is a lot to get through, so I have chosen three to spotlight in this post to guide you if this is your first encounter with the treasure trove that is the archive.

So, without further ado, turn up your speakers, plug in your ear buds, and enjoy the audio archive!

Kamau Brathwaite is a Caribbean poet born in Barbados. He explains in this reading that his connection to his Caribbean heritage was estranged at first, encouraging him to flee his home country to attend school in England and then work in Ghana in order to find a place where he felt he could write. He says, “[H]ome was philistine. Home was a kind of desert. Home was not the place where one wrote poetry. So I had to find another kind of home. Another kind of rootlessness.” Brathwaite eventually realizes that his home in the Caribbean is precisely where his poetry comes alive, and in poems like “South” (which starts at 35:50), he details his journey through rootedness and rootlessness to find his voice.

Poets laureate begin their terms in the fall with a reading of their work and conclude their terms in the spring with a lecture like this one. Josephine Jacobsen was the 21st consultant in poetry (the position that is now known as poet laureate consultant in poetry) and only the fourth woman consultant; Elizabeth Bishop was the third 20 years earlier. The lack of respect given to women poets was acute to Jacobsen. This lecture examines “the atmosphere in which [women poets] worked, in order to understand its pressures and permissions.” Jacobsen explains how women poets were pressured not to behave in certain ways and only permitted to speak of certain subjects, and she goes on to explain how poets like Anne Sexton and Sylvia Plath changed American women’s poetry by explicitly rendering emotional and bodily experiences.

Muna Lee was a poet, translator novelist, and activist, who worked most of her life facilitating relations between the United States and Latin America through her work at the State Department. She lived in Puerto Rico for a number of years and describes that tropical landscape and culture in her poems. One of the fun things about these recordings is that they not only capture the poems being read aloud, but also capture a bit of the poet’s personality. Notice how differently Lee reads her poems: she reads her second poem, “Legend,” much more dramatically than the others, letting herself get caught up in the rolling, emphatic quality of the lines so that the last line arrives loudly. A few poems later, she reads the short poem, “Hacienda” (8:40), more hypnotically, and the last line arrives much more quietly, fading into the hush of the organic items of the poem—cinnamon and cassava root.