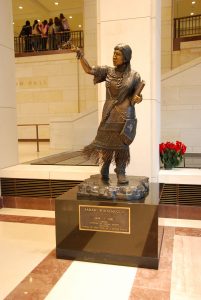 November is National Native American Heritage Month. This annual recognition of the contributions of Native Americans to our national culture began in 1986, when President Ronald Reagan proclaimed November 23–30 of that year “American Indian Week.” In 1990, President George H. W. Bush extended the observance to an entire month. Every year since then, U.S. presidents have called for celebrating Native-Americans during the month of November, urging all the peoples of the United States to learn more about Native-American culture.

In that spirit, we thought it would be a good time to highlight the remarkable story of Sarah Winnemucca. A powerful advocate for her people, she is also considered to be the first Native-American woman to secure a copyright and publish in the English language. In honor of her achievements, a six-foot-four bronze likeness of Winnemucca, sculpted by Benjamin Victor, was unveiled in 2005 in Emancipation Hall, the majestic gathering space in the U.S. Capitol Visitor Center.

Born in 1844 as Thocmetony, or “Shell Flower,” Winnemucca was a member of the Northern Piute tribe from an area that would later become the state of Nevada. The tribe had its first contact with white settlers shortly after her birth. Her grandfather, Chief Truckee, sought an amicable relationship with them, taking Winnemucca and other relatives to California to live and work among settlers when Winnemucca was a child. By age 10, she had learned English and Spanish. When she was 13, she lived in the household of William Ormsby of Genoa, Nevada, and later attended school briefly at the Convent of Notre Dame in San Jose.

In the meantime, the gold rush to California and the settlers it attracted to the West had undercut the Piute’s traditional way of life. In 1866, Winnemucca’s tribe asked her to use her English-speaking ability—a rare skill among her people—to ask the U.S. Army to stop the depredation of Piute bands by settlers. She agreed and went on to become an intermediary between her people and the U.S. government. She served variously as a translator, an interpreter and a teacher in interactions between her people and white settlers—sometimes incurring hostility for her approach to doing so.

Winnemucca published and copyrighted “Life Among the Piutes: Their Wrongs and Claims” in 1883 during a lecture tour of the East Coast in which she gave hundreds of speeches about her people’s lack of land, sustenance and rights. She had earlier traveled to Washington, D.C., to press President Rutherford B. Hayes to help.

In “Life Among the Piutes,” Winnemucca uses tales of hardship and human interest to persuade readers to pressure the U.S. government to change its Piute policy. The final chapter includes a petition to Congress for this purpose.

Winnemucca’s husband, Lewis H. Hopkins, helped Winnemucca by gathering material for the book at the Library of Congress. Educator Mary Peabody Mann edited the draft manuscript, and she and her sister, activist Elizabeth Peabody, hosted Winnemucca in their Boston home during Winnemucca’s lecture tour.

When Winnemucca returned to Nevada, she founded the Peabody Indian School, where she taught children in their native language and in English. Despite some success, the school suffered from financial shortfalls, including lack of support from the government, which demanded assimilation in Indian education. In 1887, the school was forced to close.

Four years later, Winnemucca died at her sister’s home in Henry’s Lake, Nevada, at age 47. The New York Times published news of her death on the front page of its October 27, 1891, issue, citing Winnemucca as the “most remarkable woman among the Piutes of Nevada.”

“It has been written that Sarah died believing she had not accomplished much—unconvinced that her life had an impact,” former senator Harry Reid of Nevada said at the dedication of Winnemucca’s statute in 2005. “I think if she could see us today, she might change her mind.”

For more information about National Native American Heritage Month, visit the newly updated web portal of the Library of Congress, the National Endowment for the Humanities, the National Gallery of Art, the National Park Service, the Smithsonian Institution, the United States Holocaust Memorial Museum and the U.S. National Archives and Records Administration. The portal is a collaborative project to pay tribute to the rich ancestry and traditions of Native Americans and to recognize their important contributions to the United States.