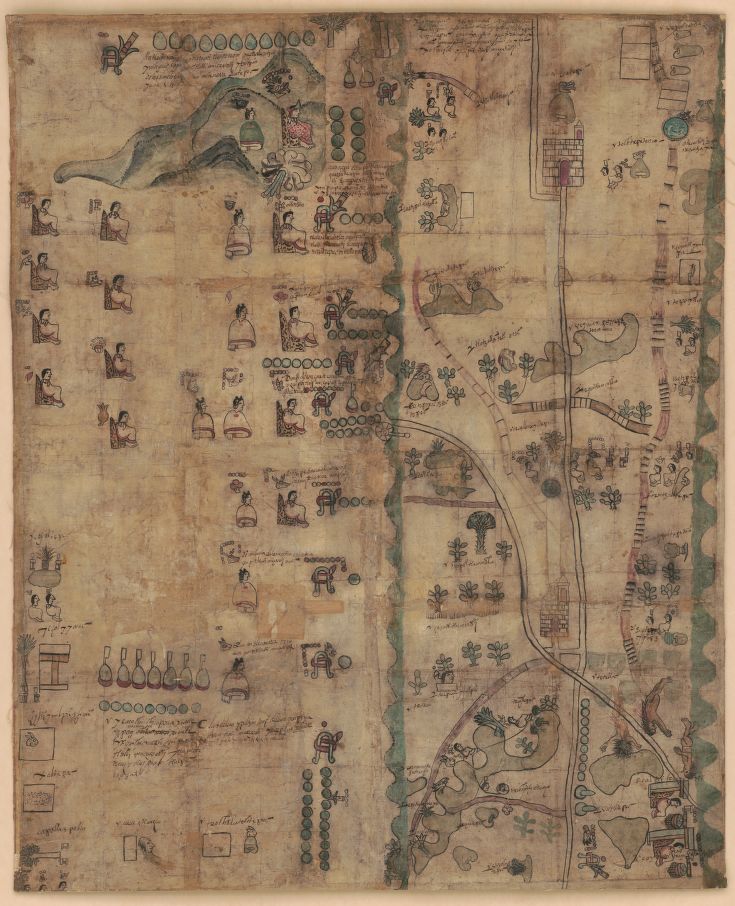 This is a guest post by Benny Seda-Galarza of the Office of Communications.

The Library of Congress recently acquired the Codex Quetzalecatzin, one of the most important indigenous manuscripts from the earliest history of America to become available in the last century.

The Codex Quetzalecatzin, an extremely rare Mesoamerican manuscript acquired by the Library’s Geography and Map Division, explores the extent, the people and the history of northern Oaxaca and Southern Puebla in Mexico.

Held in private collections for more than 100 years, the codex has been digitally preserved by the Library and made available to the public online for the first time. 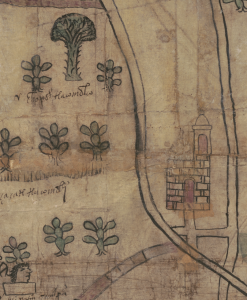 Also known as the Mapa de Ecatepec-Huitziltepec, the codex is an example of manuscripts that were made largely by indigenous painters and scribes. The manuscript belongs to a larger group of interrelated pictographic documents, called the “Pinome Group.” The manuscripts include the Tecamachalco Canvas, Cuevas Codices and Fragmented Codex, which together represent the history of the region.

This codex dates from 1593, a time when many cartographic histories were being produced as part of a Spanish royal investigation into the human and community resources of the American colonies. As with many period manuscripts of the indigenous Nahua peoples, the Codex Quetzalecatzin depicts the local community at an important point in its history, and the iconography that makes up the map reflects Spanish influence.

“The codex shows graphically the kinds of cultural interactions taking place at an important moment in American history,” said John Hessler, curator of the Library’s Jay I. Kislak Collection of the culture and history of the early Americas. “In a sense, we see the birth of what would be the start of what we would come to know as the Americas.”

Due to the chronological system used in the manuscript, this document can be placed at the end of the 16th century. The periods in which each governor ruled are depicted with symbolic blue dots representing years and flags representing units of 20 years. This system is also applied in other Pinome Group documents.

The codex is divided into two halves. The left half, framed by representations of mountains in shades of green and blue, deals with the genealogy, land ownership and properties of the family line known as de Leon. With Aztec stylized graphics, the map illustrates the family’s descent from Lord-11 Quetzalecatzin, who in 1480 was the region’s major political leader. The genealogy of the rulers begins from above with the oldest pre-Hispanic rulers and goes to the bottom of the document to end with the latest of the 16th century. 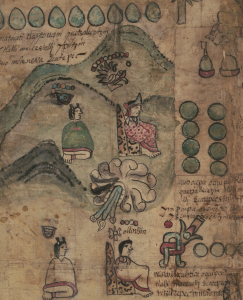 Lord-11 Quetzalecatzin (in red) sits in a jaguar fur chair with a gray scarf on his neck.

The right half shows a community adapting to Spanish law with churches and Spanish names. In the codex, certain features that point to indigenous authorship include pre-Hispanic stylistics, such as symbols for rivers, roads and pathways and hieroglyphic writing. The marginal notations with alphabetic writing using the Latin alphabet and the names of some of the indigenous elites, such as don Alonso and don Matheo, are clues to its colonial-era composition.

Nahuatl, known historically as Aztec, is a language or group of languages of the Uto-Aztecan language family. Varieties of Nahuatl are spoken by an estimated 1.5 million Nahua peoples, most of whom live in central Mexico. A large body of literature in Nahuatl, produced by the Aztecs, survives from the 16th century, recorded in an orthography that was introduced by Spanish priests. All Nahuan languages are indigenous to Mesoamerica.

The name Quetzalecatzin is composed of two indigenous words that come from the Nahuatl: “ecatl,” which means air, and “quetzal,” a bird of peculiar and beautiful plumage that inhabits the mountainous jungle in central-tropical zones. The quetzal played an important role during the period—kings and high priests adorned their heads with headdresses or crowns with its feathers. The Nahuas, like many indigenous peoples, deified the elements.

The codex’s provenance is well documented. The Library acquired the manuscript from the collections of Charles Ratton and Guy Ladriere in France. From previous owners like William Randolph Hearst, who also owned the Jefferson Bible, to the first Viscount Cowdray, the codex can be traced into the 19th century.