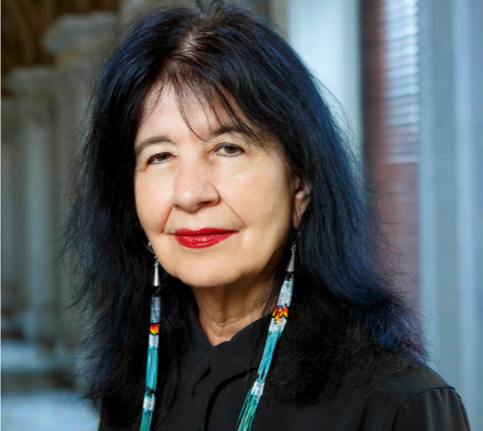 Delighted to write this piece with Brett Zongker, chief of media relations.

When Joy Harjo became the 23rd U.S. Poet Laureate, she knew she wanted to take the country back to its beginnings, long before whites arrived from Europe.

Harjo, a member of the Muscogee (Creek) Nation, wanted to document and amplify the voices of her fellow Native Americans who see the land through a different lens, different languages and a different sensibility.

“As the first Native Nations poet laureate, I was aware that indigenous peoples of our country are often invisible or are not seen as human,” Harjo writes in the introduction to her new anthology of poems from Native poets. “You will rarely find us in the cultural storytelling of America, and we are nearly nonexistent in the American book of poetry.”

Her new book, “Living Nations, Living Words: An Anthology of First Peoples Poetry” ($15, available at the Library’s bookshop) is edited by Harjo and closely tracks the work she’s undertaken as poet laureate to bring Native poets into mainstream recognition. It’s published by the Library in association with W.W. Norton & Company.

Her signature project at the Library has been to create a digital map of “First People’s Poetry.” It gathers the work of 47 contemporary Native poets into a multi-media telling of their lives and work, ranging from New York to the Hawaiian islands. The project also includes a new online audio collection developed by Harjo and housed in the Library’s American Folklife Center, which features poets reading and discussing their work. The new anthology is a companion volume to that project, featuring poets including Natalie Diaz, Ray Young Bear, Craig Santos Perez, Sherwin Bitsui and Layli Long Soldier. The poems, chosen by the poets themselves, reflect on the themes of place and displacement with focal points of visibility, persistence, resistance and acknowledgment. It moves from east to west, from the “Becoming” of the morning sun, to the “North-South” of the central heartlands, and finishes in the West, or “Departure.”

In “Daybreak,” the first poem, Jake Skeets, a Navajo poet and winner of a 2020 Whiting Award, mixes the ancient past with the clanging modern present, writing, in part:

above a passing plane or marsh hawk or maybe a crow

casts its wing on the sweet yellow clover and field weed

a basketball backboard crafted from sheet metal and

The poems in the following 222 pages showcase “that heritage is a living thing, and there can be no heritage without land and the relationships that outline our kinship,” Harjo writes.

Championing this kind of work has shaped Harjo’s lifelong trajectory. Born (and still based) in Tulsa, Oklahoma — the place where the Trail of Tears ended — she earned her undergraduate degree at the University of New Mexico and an MFA from the Iowa Writers’ Workshop.

Her subsequent career has centered around poetry, music (she’s a saxophonist), teaching and social justice issues She’s the author of nine poetry collections, most recently “An American Sunrise.” Her memoir, “Crazy Brave,” won the PEN USA Literary Award for Creative Nonfiction. She’s won the Wallace Stevens Award from the Academy of American Poets, the William Carlos Williams Award from the Poetry Society of America and the Ruth Lilly Poetry Prize.

First named as U.S. Poet Laureate in 2019, she was recently appointed to a third term — only the second poet to do so since the position was established in 1943.

And, while her focus is often on the past, her point is always about the present.

“The mapmaking represented by this anthology comes at a crucial time in history,” Harjo writes, near the end of her introductory essay, “a time in which the failures to acknowledge, listen to, and consider everyone when making the map of American memory has brought us to a reckoning.”