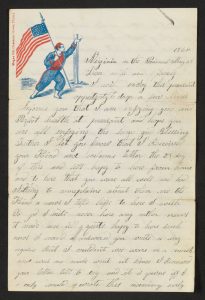 Students of the Civil War are fortunate that so many Americans of the era were literate, and during the war made good use of their ability to read and write. Soldiers wrote to loved ones with stirring sentiments of patriotism, observations of camp life, longings for home, news of their comrades (who were often relatives, friends or neighbors) and sometimes frank statements of the horrors of battle they witnessed. Servicemen treasured the letters they received from home, and complained when their names were not included at mail call. But what if their loved ones could not write back? The John Carvel Arnold Papers, now available online from the Library of Congress, document how one couple dealt with illiteracy during the Civil War.

Laborer John Carvel Arnold of Snyder County, Pennsylvania, enlisted in February 1864 as a private in Company I of the 49th Regiment Pennsylvania Infantry, and was sent to the front in Virginia. He wrote to his wife, Mary Ann, as often as time, marching orders and mail service allowed. He typically began his letters with a comment on his health before telling her about regimental activities and movements, updating her on soldiers they both knew and providing advice about domestic matters she had to attend to in his absence. And he frequently wrote about writing. He noted when he received a welcome letter from home, or implored her to write more often when letters did not arrive regularly enough. The postscript of his May 28, 1864, letter said it all: “write soon.”

Mary Ann Arnold would have written her husband sooner, except that she was illiterate. Mary Ann relied on neighbors in Port Trevorton, Pennsylvania, to transcribe her sentiments onto paper, and the clear variations in handwriting in letters John Arnold received from his wife attest to the community effort on Mary Ann’s behalf. Some scribes – examples from three appear below – seem to have been only slightly more literate than Mary Ann, whose husband also employed irregular grammar and phonetic spelling in his own correspondence. 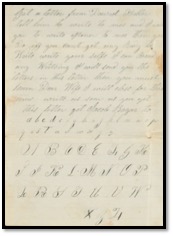 John wrote out the alphabet in a letter to Mary Ann to help her learn to write.

To Mary Ann’s suggestion that with some guidance she could try to write a letter on her own, John sent a reply containing the upper and lower case letters of the alphabet so that she could learn to write. “I can Read any Writeing,” he stated, and exhorted her to “write oftener.”

Mary Ann’s efforts did not always satisfy John’s expectations, however. “Dear wife what is the reason that you Don’t Write oftener I was Exspecting a letter every male that come in But all in wane [vain],” he next wrote on June 20. After not hearing from Mary Ann for five weeks, John had resolved in October to not write again until he first received a letter from his wife. But word that guerrilla forces in northern Virginia had captured the mail caused him to reconsider, thinking that perhaps one of her letters had been seized. Mary Ann replied to this news that she “was sorry that you sought that you would not write to me till you would get a letter from me,” but, she reminded her husband, “you no that i cant write myself and so I cant write when i pleas.”

Despite the occasional moments of frustration with one another, the Arnolds’ letters showed them to be a loving couple. In one letter, for example, John Arnold signed himself her “Cinsear Husband Father friend and lover.” In another, he wrote their names followed by an illustration of clasping hands. 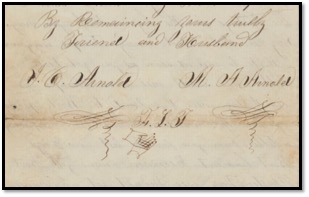 Unfortunately, the Arnolds’ love story did not have a happy ending. Arnold wrote his wife on June 5, 1864, about the casualties his unit had suffered, and the trust he placed in God to spare his life. “I feel confident that iff it is not gods will for me to be shot the is no reb that can shoot me.” Arnold’s prayers were not answered. Less than a month after being promoted to the rank of corporal, John Carvel Arnold was killed in action on April 6, 1865, at the battle of Sailor’s Creek, Virginia. Three days later, Confederate general Robert E. Lee surrendered at Appomattox Court House, essentially bringing the war in Virginia to an end.