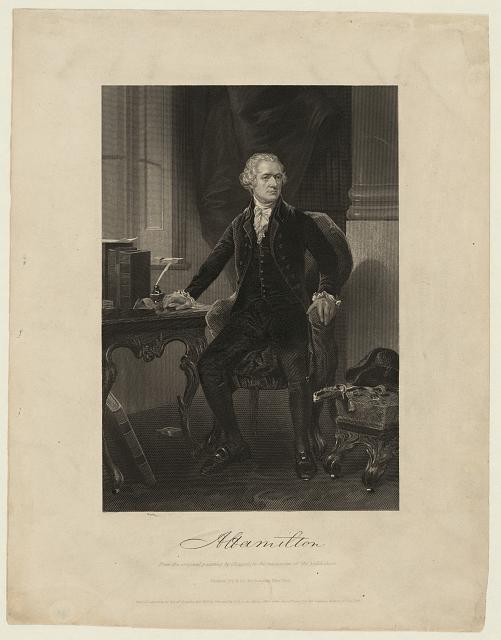 Alexander Hamilton from an original painting by Alonzo Chappel (1828–87).

In spring 1848, Congress appropriated $20,000 to buy the papers of Alexander Hamilton from his family, including his widow, Elizabeth Schuyler Hamilton. Mrs. Hamilton, 91 years old and widowed since 1804, had moved to Washington that year to live with her daughter and, in the words of a friend, to press her “honorable claims” on the federal government. For years, she had been gathering and preserving her husband’s papers so that his memory would continue to shine even after she was no longer alive to burnish it. Now her work was done.

Congress kept Alexander Hamilton’s papers at the State Department, where the first to use them was John Church Hamilton, the Hamiltons’ son, who fulfilled his mother’s long-held wish when he published his seven-volume Works of Alexander Hamilton between 1850 and 1851. In 1903, President Theodore Roosevelt directed State to turn over its historical papers, including the Hamilton papers, to the Library of Congress. They arrived in the Library’s Manuscript Division in 1904, and they have been here ever since.

In the Manuscript Division, the Hamilton papers grew with additional gifts and purchases. The Library preserved, cataloged and microfilmed them. Scholars based books on them. A modern edition of Hamilton’s papers, edited by Harold C. Syrett, was published between 1961 and 1987. This edition was recently digitized by Founders Online. A separate edition of the papers Hamilton accumulated as a lawyer was edited by Julius Goebel and published between 1964 and 1981 (it has not been digitized). And then, in 2015, Lin-Manuel Miranda’s musical “Hamilton” made the Revolutionary War officer, treasury secretary, inconstant husband and duelist into a singing, dancing, 21st-century celebrity.

In January 2017, Sotheby’s sold a fresh trove of Alexander Hamilton papers at auction. These, mostly family papers, had surfaced after the musical’s success. The Library of Congress snagged 55 items at Sotheby’s, mostly letters from Philip Schuyler, Elizabeth Hamilton’s father, to her and her husband from 1790 until 1804, the year she lost them both. Now the Alexander Hamilton Papers at the Library of Congress, including the Sotheby’s purchase, have been digitized and are available online. 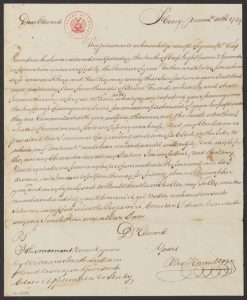 A November 11, 1769, letter from Hamilton to his friend Edward Stevens.

The Hamilton Papers consist of letters, drafts of speeches and writings, legal papers and more, a total of approximately 12,000 items. They cover almost every aspect of Hamilton’s career and private life: as a boy in St. Croix; as George Washington’s aide-de-camp during the Revolutionary War; as a New York delegate to the Constitutional Convention of 1787; as first treasury secretary of the United States; as a New York lawyer; as inspector-general of the Army in the late 1790s, when war with France threatened; and as an unlucky duelist. Included are letters to and from George Washington, the Marquis de Lafayette and Charles Pierre L’Enfant. The papers also include correspondence with and among members of his family, including his wife; his sister-in-law, Angelica Schuyler Church; and his father-in-law, Philip Schuyler.

Among the highlights of the collection is a November 11, 1769, letter the 12- or 13-year old Hamilton, working as a clerk for a trading company in St. Croix, wrote his friend Edward Stevens: “Ned,” he wrote “my Ambition is prevalent that I contemn the grov’ling and condition of a Clerk or the like, to which my Fortune &c. condemns me and would willingly risk my life tho’ not my Character to exalt my Station.” He concluded: “I wish there was a War.”

Soon there was a war, and it offered Hamilton the chance to escape his impoverished boyhood just as his younger self had imagined it would. His correspondence as aide-de-camp to George Washington in the Revolutionary War is in the Hamilton Papers (and there is more in the George Washington Papers, which are also online).

As treasury secretary in George Washington’s presidential administration, Hamilton wrote a series of reports that shaped the economic program of the United States. Drafts of these, including four drafts of his “Report on Manufactures,” are another highlight.

Hamilton’s marriage to Elizabeth Schuyler in December 1780 was as important to his advancement as was his association with George Washington. The Library’s newly acquired letters from Philip Schuyler—one of George Washington’s major generals and a great landowner and political power in New York—to his daughter and son-in-law show how the Schuylers wholly embraced the immigrant, orphaned Hamilton, providing him not only social connections but also love. In a June 11, 1799, letter to his daughter, Philip Schuyler described his son-in-law as “that best of men whom heaven has bestowed upon you.”

Hamilton threw it all away when he agreed to meet with Aaron Burr on the heights of Weehawken on June 11, 1804. The papers contain the letters Hamilton wrote before the fatal duel. To his wife he wrote: “I need not tell you of the pangs I feel, from the idea of quitting you and exposing you to the anguish which I know you would feel. . . . Adieu best of wives and best of Women. Embrace all my darling Children for me.” But expose her he did, and the children, which is how she came to be in Washington in 1848, petitioning Congress to buy the paper remains of his life.

Now you can read Alexander Hamilton’s Papers online at home. You can page through folders, enlarge and rotate single images and learn from the bibliography, timeline, information for teachers, and more. And you will please the ghostly Elizabeth Hamilton, who I imagine is flickering around the Library of Congress right now, scrolling through her husband’s papers and smiling.