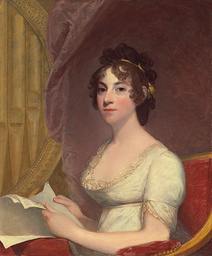 This is the second of two related guest posts by Cassandra Good, associate editor of the Papers of James Monroe and author of “Founding Friendships: Friendships Between Men and Women in the Early American Republic” (2015), and Susan Holbrook Perdue, director of digital strategies at the Virginia Foundation for the Humanities and adviser to a variety of historical editing projects.

As we mentioned in the first post in this two-part series, for anyone interested in the founding era in Washington, D.C., the writings of Margaret Bayard Smith (1778–1844) and Anna Maria Brodeau Thornton (ca. 1775–1865) are essential sources. Both lived their entire adult lives in the capital city and, as members of the city’s elite, were friends with one another and important political figures of the era. Their proximity to power made them unusual, but their writings also illustrate what it was like to be a woman in the early republic.

The papers of Smith and Thornton are in the Library’s Manuscript Division, and now they are online for the first time. This post focuses on Thornton; our first covered Smith.

Thornton came from much more humble origins than Smith. She was born around 1775 to Ann Brodeau, who emigrated to Philadelphia from England that year to establish a school. The identity of her father is a mystery. He may have been English clergyman William Dodd, who was hanged for forgery two years later. At only 15, she married 31-year-old William Thornton, an architect from the British West Indian island of Tortola. He helped plan the capital city, designed the United States Capitol and served as head of the Patent Office.

The couple came to Washington in 1792, before the city was built, and, like the Smiths, became fixtures of the Washington elite. While William Thornton is better known, and a volume of his writings has been published—the Manuscript Division also has a large collection of his papers—Anna Maria Brodeau Thornton’s writings are an important source of information about daily life in Washington. 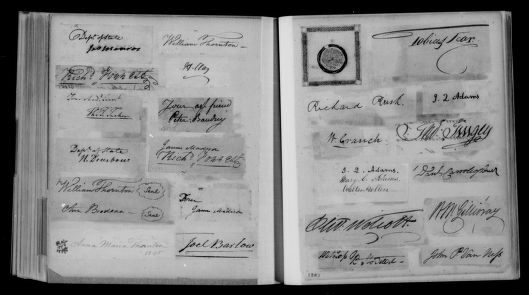 In 1904, Thornton’s papers were donated to the Library of Congress by John Henley Smith, Margaret Bayard Smith’s grandson. He inherited the papers of his grandmother and both William and Anna Maria Brodeau Thornton around 1899. His father, Jonathan Bayard Harrison Smith, was Anna Maria’s lawyer and executor. The Smiths and Thorntons were close friends, and Anna Maria had hoped Harrison Smith could have her husband’s papers published. Thus both William and Anna Maria Brodeau Thornton’s papers were stored away with Margaret Bayard Smith’s papers.

In 1907, one volume of Thornton’s diary was published in the Columbia Historical Society’s journal. Over the past century, historians have frequently cited it, but Thornton’s papers at the Library of Congress have much more material than the published diary volume. It’s also worth noting that, unlike modern editors of historical documents, early editors often excised text, changed spellings and made other alterations without alerting the reader.

Thornton’s papers are divided into seven volumes, each accessible with individual links from the finding aid. These volumes are compilations of a variety of materials, ranging from pocket almanacs with handwritten notes to household expense accounts to diaries. Thornton’s papers span from 1793 until her death in 1861, covering both her dinner guests and national political events. She, like Bayard Smith, kept a commonplace book with essays, poems and quotes. The collection also includes silhouettes (including some by acclaimed American artist Charles Willson Peale) and autographs.

Thornton’s diary entries are generally quite succinct, but they contain valuable information, including what food she was purchasing, what tasks she assigned to her household slaves, who dined or took tea with whom, personal finances, the passage of legislation and the weather.

With only her journal from 1800 and the set of diary entries on the invasion of Washington in 1814 published, there is plenty new to discover.