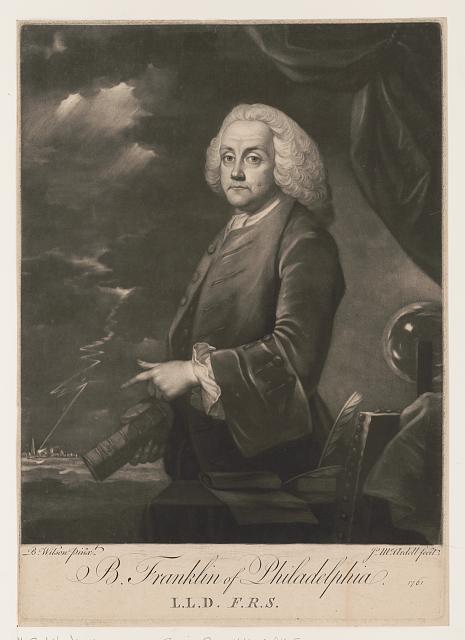 Half-length portrait of Benjamin Franklin by Benjamin Wilson, 1761. Like Franklin, Wilson experimented with electricity; in the background of this painting, lightening strikes a village. Franklin sat for the painting while serving as a diplomat in London.

The papers of Benjamin Franklin at the Library of Congress have had almost as adventurous a life as Franklin had himself. They have been abandoned and recovered, cut up by a dressmaker to make patterns and used as collateral for debt. After surviving all of that, they narrowly escaped fiery destruction on a New York pier (more on this later).

Now, in a technological development that would have fascinated Franklin, the Manuscript Division is pleased to announce that the papers have been digitized and made available on the Library of Congress website.

The approximately 8,000 items that constitute Benjamin Franklin’s papers at the Library are organized in four groups, or series.

The first two, constituting the bulk of the collection, once belonged to Franklin’s grandson, William Temple Franklin, who used them as the basis of his “Memoirs of the Life and Writings of Benjamin Franklin,” published in 1817–18. The U.S. government purchased these two series from American book dealer Henry Stevens in 1882, housing them at the State Department until they were transferred to the Library of Congress in 1903 and 1922.

The third series consists of other Franklin papers the Library acquired by gift or purchase from various sources. The fourth series, which is not included on the Library’s website, contains copies of Franklin papers in other libraries and private hands. 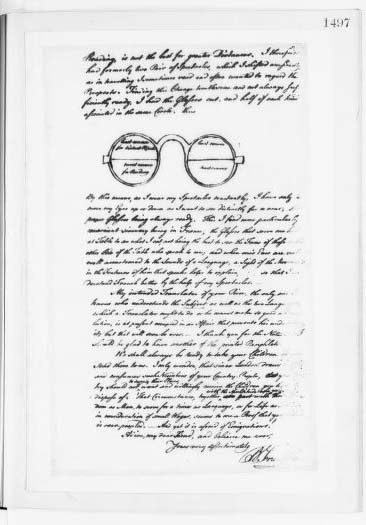 A May 23, 1785, letter from Franklin to George Whatley. Franklin is credited with inventing bifocal glasses, which he sketched here for Whatley, a London merchant and pamphleteer.

Now, for the first time, researchers can view the first three series online. They have long been available on microfilm, but the website provides enhancements and additional information not available on the film.

The front page of the Benjamin Franklin Papers site describes the contents of each series and the scope of the collection. A related resources link features a bibliography. Information for teachers and researchers is available in multiple links under the headings Teaching Resources and Expert Resources, while an articles and essays link provides a timeline of Franklin’s life and the story of the papers’ provenance. The papers are also searchable. For instructions, see “Learn More” below.

To return to the adventures of the Library’s Franklin Papers, we must go back to William Temple Franklin. He was partly responsible for the creation and preservation of these papers, but also for the dangers they were exposed to—dangers he was no stranger to himself.

Temple, as he was known, was born in London in 1760 or 1762, the son of William Franklin, Benjamin Franklin’s son. Taken from his mother, abandoned by his father, enduring early years in foster care, Temple was eventually rescued by his grandfather, Benjamin Franklin.

Between 1776 and 1785, when Benjamin Franklin was a diplomat in France, Temple served as his secretary, helping to negotiate the treaty that ended the Revolutionary War, among other tasks. 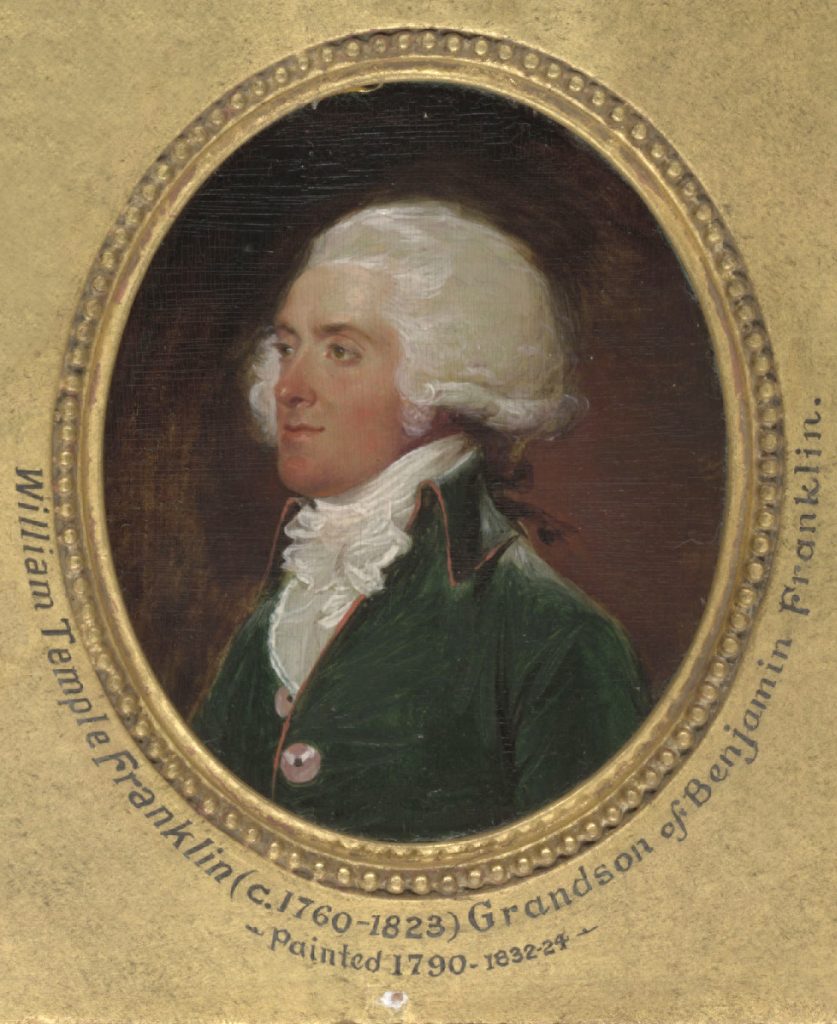 When the Franklins returned to the United States, despite his grandfather’s backing, Temple failed to find a job, possibly because of his reputation for flightiness. Benjamin Franklin, trying to help Temple, left him his papers, thinking he could profit by publishing them.

The portion of the papers Temple chose to publish, now series one and two, show the marks of his rough handling—his editorial scribblings, the damp of sea voyages, and the raggedness that resulted when he abandoned them after he was done with the “Memoirs.”

As a result of events that remain murky, the abandoned papers were discovered years later tied in bundles in the shop of a London tailor who had been Temple’s landlord. By this time, the tailor had cut up an unknown number of Franklin’s letters and writings to make patterns.

Henry Stevens, the book dealer, purchased the papers but ended up losing them to creditors. He eventually repurchased them with aid from Junius Spencer Morgan (father of banker and book collector J. Pierpont Morgan). Then, in 1882, Stevens sold them to the U.S. government.

Remarkably, the papers once again narrowly escaped destruction after traveling safely from England to New York—the pier they landed on burned just after a courier picked the papers up to deliver them to Washington.

For more about the colorful history of the Benjamin Franklin Papers and the life of William Temple Franklin, read the provenance essay on the Franklin papers website, and see works by Whitfield Bell, Claude-Anne Lopez, Francis Philbrick, Stacy Schiff and Henry Stevens in the bibliography included in related resources.

Learn More: Using the Franklin Papers Online
Because 18th-century handwriting can be hard to read, use the online collection in conjunction with Yale University’s published edition of Franklin’s papers, available at franklinpapers.org and Founders Online.

The published edition of Franklin’s papers is full-text searchable, but the images on the Library’s website are not, a by-product of the papers’ origins as microfilm. Be warned, finding what you want will require some patience. Your reward will be a glimpse of the impressions Franklin’s hand made on the page.

To find a letter or other document in the papers, follow these steps: