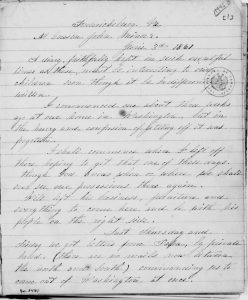 “A diary, faithfully kept in such eventful times as these, must be interesting to our own children,” wrote Betty Herndon Maury on June 3, 1861, explaining her purpose in keeping a journal after Maury’s family chose to leave Washington, D.C., to cast its lot with the new Confederate States of America. By October 1861, Maury feared that she already had recorded so much that her diary would be “too voluminous” for her daughter, Nannie Belle, to read later. Fortunately for posterity, Maury continued to write, recognizing that “these are such eventful times and there are so many interesting incidents that I do not know which to omit.” Maury’s two-volume diary is now available online at the Library of Congress.

The impact of the war on Maury’s family occupied a central place in her diary. She lamented that her father, famed oceanographer Matthew Fontaine Maury, did not receive assignments in the Confederacy worthy of his talents and reputation, but recorded his contributions to the war effort. Her husband (and cousin), William A. Maury, left his legal career in Washington, D.C., to join the Confederate government in Richmond, while his wife and daughter “refugeed” with relatives in Fredericksburg, Virginia.

Will’s extended absences and preoccupations caused Betty to question her role in their relationship and express disappointment when he left her behind, a common response of spouses during the Civil War.

Betty frequently wrote about her daughter, especially as the war brought out both Nannie’s feisty nature and her anxiety. To the offer of candy from a Union soldier in occupied Fredericksburg in May 1862, Nannie coolly replied, “No I thank you Yankee candy would choke me.” But fears of the unknown weighed heavily on Nannie’s mind by January 1863. “She is the most singularly nervous child I ever saw,” Betty recorded. “She shrinks from going out and is afraid to go to sleep for fear of dreaming bad dreams.” Betty’s father had advised her to shield Nannie from “things above her comprehension,” and she agreed that children absorbed more adult conversation than suspected.

Betty felt no such compassion for another family member, future president Chester A. Arthur. The husband of Betty’s first cousin Ellen Herndon Arthur, to whom she had been close before the war, came to Fredericksburg in May 1862 as quartermaster of the New York State troops. “I met him on the street but did not speak to him,” she boasted in her diary. “I could not shake hands with a man who came as an invader, to desolate our homes and kill our brothers and husbands.” Betty would later reconcile with the Arthurs, but Betty’s familial affection was a casualty of war in 1862.

The war also impacted the households in which Betty lived by disrupting the institution of slavery, long before Abraham Lincoln issued the preliminary Emancipation Proclamation in September 1862. The presence of the Union army near Fredericksburg prompted many slaves to exploit opportunities in the changed environment, if they remained in the vicinity at all. “The negroes are going off in great numbers,” Betty recorded on April 25, 1862. “We hear that our own three are going soon.” Still, slave escapes were not her primary concern. “I am afraid of the lawless Yankee soldiers, but that is nothing to my fear of the negroes if they should rise against us.” 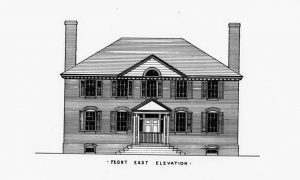 An architectural rendering of the Dixon-Maury House in Fredericksburg, Virginia, where Betty lived in 1861 and 1862.

“Matters are getting worse and worse here every day with regard to the negroes,” she noted in May. Hundreds of slaves escaped, and some of those who stayed demanded wages. Betty claimed to be relieved that most of their servants had gone, citing their perceived “insolent and idle” behavior.

Betty documented in her diary other changes on the home front. The disruption of domestic arrangements forced elite white women to perform more manual labor – cleaning, dying and spinning wool, making hats – and to make do with the clothing they had on hand when military activity stranded them from home for extended periods. When items were available to purchase, a currency shortage caused confusion as to the prices in coins, U.S. paper currency or “Virginia money,” and consumers might get their change in stamps. Lodging was a perpetual concern for Betty, who wondered where she would go after the death of the relative in whose house she lived in Fredericksburg in 1862, and then again in February 1863 after being evicted by her landlord in Richmond. When the diary ended on February 18, 1863, Betty was pregnant with her second child, homeless and uncertain where to go. That daughter, Alice Maury Parmalee, donated her mother’s diary to the Library of Congress in 1928.