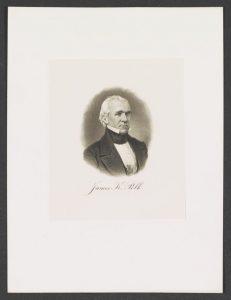 “Twelve months ago this day, a very important conversation took place in Cabinet between myself and Mr. Buchanan on the Oregon question. This conversation was of so important a character, that I deemed it proper on the same evening to reduce the substance of it to writing for the purpose of retaining it, more distinctly in my memory,” President James K. Polk wrote on August 26, 1846. “It was this circumstance which first suggested to me the idea, if not the necessity of keeping a journal or diary, of events, and transactions which might occur during my Presidency.” Polk fulfilled his pledge to keep a presidential diary, recording the significant or noteworthy events in his life from August 26, 1845, to June 2, 1849. Consisting of 25 volumes, Polk’s diary is part of the James K. Polk Papers at the Library of Congress, now available online. 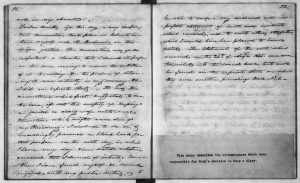 Polk wrote of his decision to keep a presidential diary on August 26, 1846.

Early in his administration, President Polk shared with Secretary of the Navy George Bancroft his four key goals: tariff reduction, establishment of an independent treasury, settlement of the Oregon boundary question with Great Britain and the acquisition of California and other western territory. Each objective was achieved during Polk’s presidency and duly chronicled in his diary, as is the war with Mexico prosecuted during his administration.

Although Polk’s opinions on political issues dominate most entries in his diary, he also offers his observations on the presidency and individuals in political life and sheds light on his own personality. Polk devoted almost all of his time and energy to the presidency and frequently commented in his diary about being confined at the White House. “I have performed great labour and incurred vast responsibilities,” Polk noted in January 1847, nearly two years into his term. “In truth, though I occupy a very high position, I am the hardest-working man in the country.” Even public receptions at the White House were scheduled to allow him to “devote the balance of the evenings of the week to business in my office.” In sum, Polk concluded on April 7, 1846, “it is emphatically true that the Presidency is ‘no bed of roses.’”

Only on occasion did Polk allow himself some much-needed diversions. Sometimes he and his wife, Sarah, would dine with friends or political associates or take short excursions outside of the capital, such as to Fort Monroe in August 1846. He enjoyed a quick trip in 1847 to his alma mater at the University of North Carolina at Chapel Hill, followed by a two-week tour of the North beginning on June 22. Polk recognized the physical strain the long hours of work put on him, which “rendered some recreation necessary.” Entertainment imposed upon him, however, could prompt his scorn. On February 6, 1846, the young people in his household arranged for a juggler to perform at the White House and encouraged the president to attend the gathering. “Mr Alexander exhibited his art, greatly to their wonder and amusement,” Polk noted, “but I thought the time unprofitably spent.” 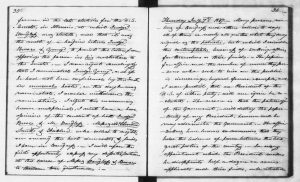 Polk complained about political patronage in this diary entry from January 7, 1847.

Like many presidents before and after him, Polk had nothing but scorn for the constant stream of office-seekers looking for political patronage. Many diary entries contain disparaging comments about those engaged in “the contemptible business of seeking office.” In a long entry devoted to the subject on January 7, 1847, Polk lamented the uselessness of congressional references after one senator admitted he recommended a candidate who was “without character & wholly unqualified” because congressmen were “obliged to recommend our constituents when they apply to us.” The president specifically identified Senator Sidney Breese of Illinois as “the most troublesome and inveterate seeker for office for his friends.”

Polk pledged to serve only a single term as president, a vow that he kept. Having turned over the stress and responsibility of the presidency to his successor Zachary Taylor, Polk rejoiced in his diary on March 4, 1849, that he was sure to be “a happier man in my retirement,– than I have been during the four years I have filled the highest office, in the gift of my countrymen.”

After meeting his every goal as president, however, he failed to achieve his fondest wish as a private citizen. He returned to his home in Tennessee via a southern route, where cholera was a concern. His diary records his attendance at many public functions along the way, and his corresponding physical fatigue at having done so. His constitution likely weakened by four years of toil, Polk succumbed to illness and was unable to continue his diary after June 2. James K. Polk died in Nashville on June 15, 1849, having enjoyed just over three months of retirement.