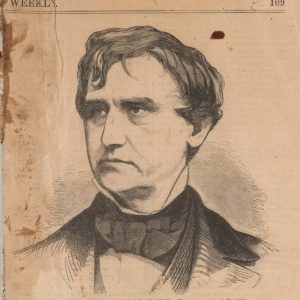 The papers of Joseph Holt (1807–94), now available online, document his career as a lawyer, commissioner of patents, United States postmaster general, secretary of war and judge advocate general of the United States Army.

Holt is best known for his service as judge advocate general during the Civil War and for presiding over the military trial of the Abraham Lincoln assassination conspirators, which is recorded in affidavits, depositions, transcribed testimony; correspondence regarding the commission that tried the conspirators; and various versions of the charges against them, as well as Holt’s correspondence about the trial long after its conclusion.

But in addition to the correspondence, diaries and legal papers that are often used to document the life of a historic figure, the Joseph Holt Papers offer abundant ephemera in the form of bills and receipts, calling cards and invitations dating from the 1820s to the 1890s that shed light on Holt’s daily life and provide evidence of the business activity and built environment of the places where he lived and visited.

The bills and receipts, for example, suggest that the Holt household really liked ice cream. In December 1863 alone, he bought almost 20 pints of ice cream from Joseph Shaffield of Washington, D.C. In 1867, he received at least five bills for cakes and multiple pints of ice cream from Shaffield’s successor, C. White, a “dealer in all kinds of fruits, confectionary and ice cream” (see Feb. 1, March 4, July 3, Aug. 1, Sept. 30).

One could speculate that Holt did some Christmas shopping at jewelers M.W. Galt, Bro. & Co. in December 1877, purchasing a brooch, a turquoise and pearl ring, a gold watch and chain and cameo buttons. He paid with a check from Riggs & Co. bank, also in the Holt Papers. 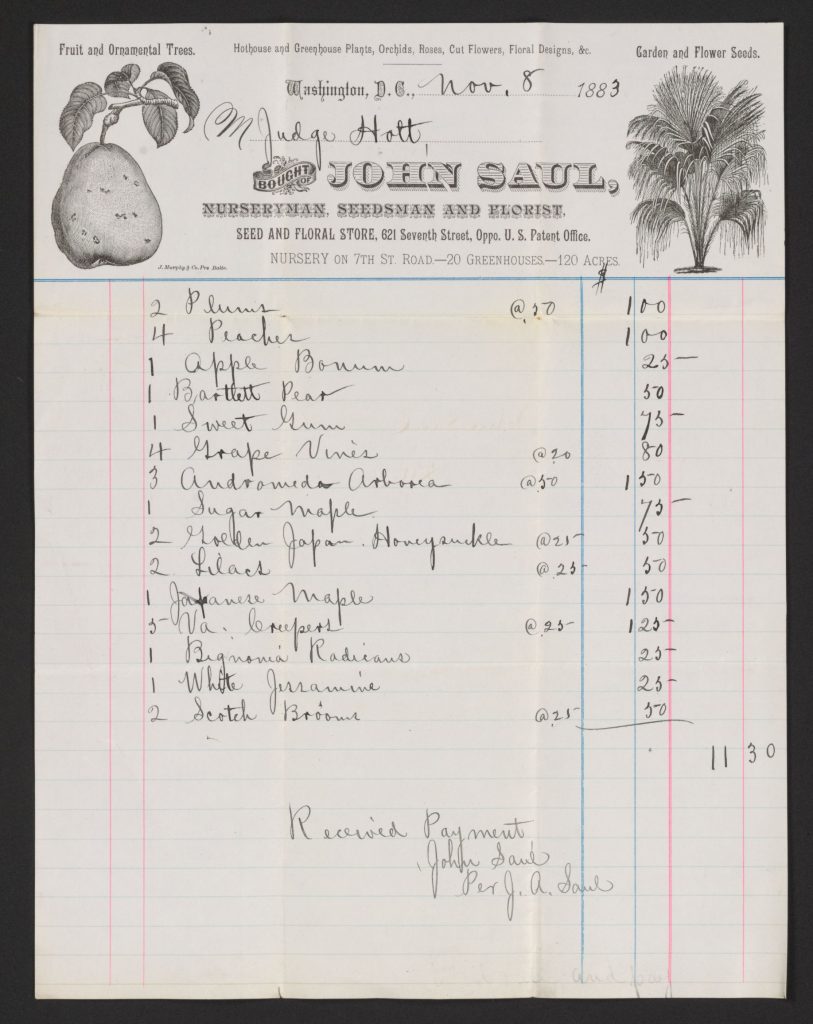 Bill and receipts record household costs and improvements made to his house at 236 New Jersey Avenue, S.E., in Washington, D.C., including a variety of paints purchased from L. Martin and awnings ordered from M.G. Copeland in 1876.

Holt paid his gas bill to the Washington Gas Light Company, his water rent and real estate tax to the District of Columbia.

Judging from the bills from nurseryman John Saul over the years, Holt had an abundant garden or bought plants for others. Some varieties were not unusual for a mid-Atlantic garden, but others, like yucca, indicate some horticultural adventurousness on Holt’s part. The illustrations on John Saul’s billheads suggest he sold exotic plants, enticing customers with images of Dracaena Goldieana, Lantania Borbonica, Washingtonia Robusta and Filamentosa.

Bills for now-defunct businesses record their existence in a city, and sometimes illustrate the spaces they once occupied. Plumbers and gas fitters Alexander R. Shepherd & Bros., hatter B. H. Stinemetz and the dry goods company of Perry & Brother included their Pennsylvania Avenue buildings on their billheads. In 1835, Brown’s Indian Queen Hotel in Washington, D.C., looked different from Brown’s Hotel in 1854 and from the greatly expanded Metropolitan Hotel in 1893. 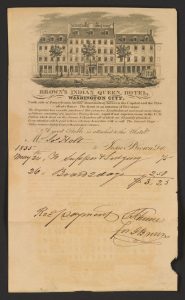 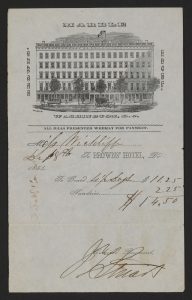 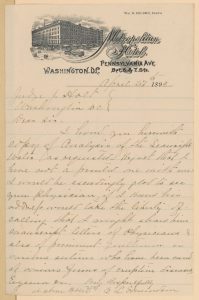 Holt’s international and domestic travels are chronicled in hotel bills, many of which display idealized views of the properties. In the 1840s and 1850s, Holt stayed in Baden, Cairo, Cologne, Geneva and Naples. Within the United States, Holt visited a number of hotels and resorts, including the Girard House in Philadelphia, Barnum’s City Hotel in Baltimore, the Mountain House in Virginia and the International House in Niagara Falls in 1862 and 1876. 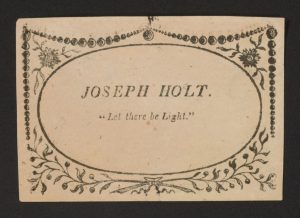 Clues to Joseph Holt’s professional and social circles are found in the calling cards and invitations he received. While serving in the Buchanan administration, he met Senators Jefferson Davis, Judah P. Benjamin and Stephen A. Douglas, and was invited to events at the White House. His circle during the Civil War and beyond included the Lincolns and General William T. Sherman, among others. In the 1880s, Holt’s circle of friends also included three dogs: Frank, Haddie and Nig, for whom he bought licenses.

Ephemera also records changes in home technology and trends in printing techniques. Bills could double as advertisements for cooking and heating stoves and refrigerators. They displayed a range of paper colors, including green, pink, gold and purple. Some billheads included embossed cameo stamps that were not only colorful and attractive, but also illustrated the nature of their trade. Thomas Geary’s carriage rental cameo further promised hacks could be “furnished for funerals at the shortest notice,” apparently a selling point in 1866. 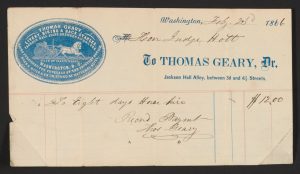