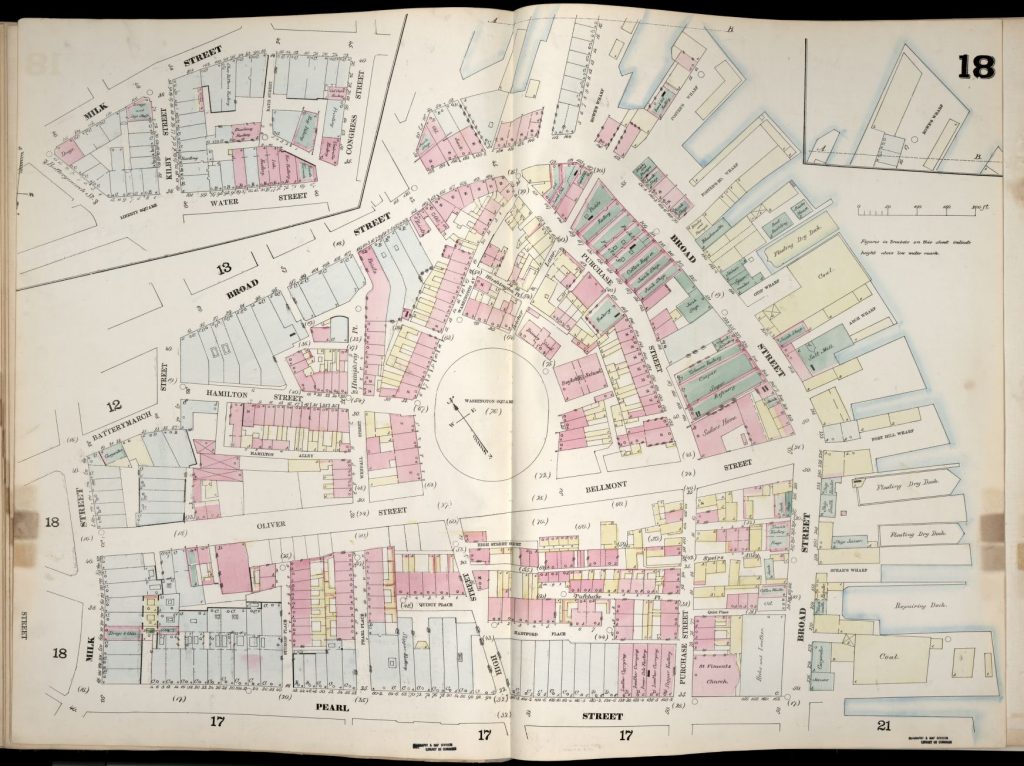 An 1867 map of Boston in the Sanborn Maps Collection shows a pickle factory, a junk shop, a sailors’ home, a sugar refinery and a floating dry dock among other structures.

Located midway between Tucson and Phoenix, Casa Grande, Arizona, now has a population of about 50,000, making it fairly small by today’s standards for cities. But it’s a lot bigger than it used to be. In 1898, only 200 people lived alongside the Southern Pacific railroad tracks there.

Besides scattered dwellings, Casa Grande had a hotel, lodging houses, stables, blacksmith and carpentry shops, stores operated by Chinese immigrants, a school and saloons. It also had several water tanks, but its water facilities were deemed poor—an important factor for a town that had been devastated by at least two disastrous fires. 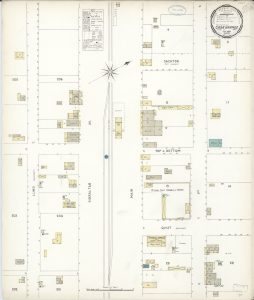 We know all that thanks in part to one of the nearly 25,000 Sanborn fire-insurance maps the Library has digitized and placed on its website. The states currently available include Arizona, Arkansas, Colorado, Delaware, Iowa, Kentucky, Louisiana, Michigan, Nebraska, Nevada, North Dakota, South Dakota, Vermont, Wisconsin and Wyoming. Alaska is also online, with maps published through the early 1960s.

The maps were created to help insurers estimate the fire hazard associated with individual structures. Now they are used by genealogists, historians, urban planners, teachers or anyone with an interest in the evolution of a community, street or building.

The Library will add more maps to the website monthly until 2020. By then, about 500,000 public-domain maps from the Sanborn Map Collection will be available.

D.A. Sanborn, a surveyor from Somerville, Mass., founded the Sanborn National Insurance Diagram Bureau in 1867. It produced meticulously detailed, large-scale maps showing information such as street names and widths; the location and boundaries of dwellings, public buildings, churches and businesses; and the presence of fire hydrants and such hazards as blacksmith forges or large bakers’ ovens. 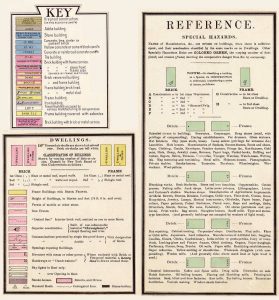 The earliest Sanborn holding in the Library’s collection is a map of Boston, actually an atlas, published in 1867. But the bulk of the collection dates from 1883, when Sanborn began to register maps for copyright protection regularly, depositing the required copies with the Library.

During its busiest period—production peaked in the early 1930s—Sanborn employed as many as 300 field surveyors and more than 400 other staff in its main office and publishing plant in Pelham, New York, and in secondary facilities in Chicago and San Francisco. By the time Sanborn published its last fire insurance map in 1977—when insurers stopped using maps for underwriting—12,000 towns and cities across the U.S. had been documented.

For the digitization project, the Library collaborated with Historical Information Gatherers, a firm specializing in historical property data. It supplied hardware and sent a team to work in the Geography and Map Division from April 2014 through May 2016. The team created a database of maps no longer under copyright protection, meaning they are available for public use. Team members then digitized the maps, which extend from the 1880s to the early 1960s. The firm is providing copies of the digitized maps to the Library. 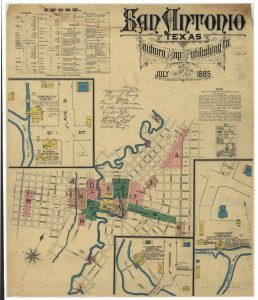 An 1885 Sanborn map of San Antonio, Tex., shows structures including a flour mill and a bottling works. The San Antonio River is a prominent feature.

“I’m very enthused by the job that’s been done. It’s been to both of our advantages,” says Colleen Cahill, digital-conversion coordinator in the Geography and Map Division. “There’s no way the Library could have done all this alone.”

Cahill is now processing digitized files eligible for posting on the website and adding metadata to make them searchable. “It’s very labor intensive,” she says. “But we’re making steady progress.”

Historic preservationist Paul Lusignan of the National Register of Historic Places, part of the National Park Service, says professionals in his field welcome digitization of the maps.

“The information you can derive from them—whether it’s block-by-block detail about the placement and use of historic buildings or information about building dates, heights, window patterns or construction—is incredibly valuable, especially to conservation or restoration projects,” he said. “It’s great they will be more easily accessible.”