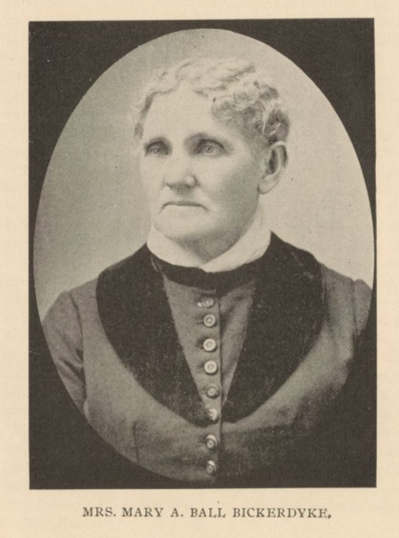 During the Civil War, thousands of Union soldiers in the Western Theater affectionately called Mary Ann Bickerdyke (1817–1901) “Mother” for the tender maternal care she provided as a nurse and relief worker with the United States Sanitary Commission. Bickerdyke’s papers at the Library of Congress are now available online. They include lists of provisions supplied for soldiers’ aid during Bickerdyke’s time in the field as well as grateful letters from soldiers who benefitted from her nursing skills, donors on the home front and relief workers who shepherded food and other material to the front. 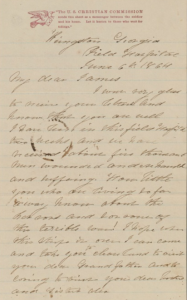 “How little you who are living so far away know about the horrors and sorrow of this terrible war!” Bickerdyke wrote to her son James on June 6, 1864.

Like other women who provided nursing services in hospitals or labored on behalf of relief agencies during the Civil War, Bickerdyke had to leave her own children behind to be “Mother” to the soldiers who needed her care. At the outbreak of the Civil War in 1861, she put her nursing background to use in Cairo, Illinois, by distributing supplies to soldiers and by serving as matron of the military hospital. Her work as a nurse and agent with the Sanitary Commission from 1862 to 1865 required her to follow the armies of Generals Ulysses S. Grant and William T. Sherman, establish field hospitals, arrange shipments of supplies and do whatever other tasks needed to be done on behalf of the soldiers who knew her as “Mother Bickerdyke.” This environment was no place for her own children, however; having been a widow since 1859, she had to rely on family and friends to look after her brood.

Letters between Bickerdyke and her children in the Bickerdyke Papers document the tension this separation occasionally caused between mother and children. “I suppose you are very busy and hardly have time to think of the loved ones at home,” wrote Bickerdyke’s daughter Mary on November 25, 1861. “There is not many minutes passes but I think of you wishing you was home or I could see you.” Son James frequently mentioned in his letters a wish to see his mother, noting on January 7, 1864, that “I would walk 5 miles to see you if you was so near.” 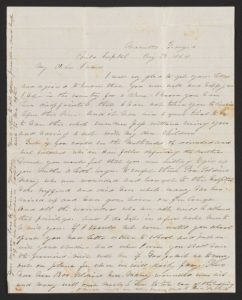 Knowing that her children were safe with friends at home, Bickerdyke felt her duty lay with the boys in the field. She tried to explain in her letters to her own boys the necessity of her absence. On August 23, 1864, Bickerdyke wrote to James from a field hospital in Marietta, Georgia, during Sherman’s campaign for Atlanta. She regretted that she had not seen him all summer but noted if he “could see the multitudes of wounded and sick soldiers who are now fallen defending the northern homes you would feel that you were willing to give up your mother a little while longer to comfort them.” On the reverse side of the same page she explained her absence to son Hiram by asking him to sympathize with the wounded soldiers for whom she cared. “Just think if you had one leg amputated and shot through the arm or chest or head how much you would need your Mother to attend upon you and then think of one or two thousand in that condition and you will be patient . . . to give your Mother to these poor wounded dying men, for many die.”

James Bickerdyke still wished to be reunited with his own mother, but on March 30, 1865, expressed a sentiment that could have applied to all those soldiers with whom he had shared Mary Ann Bickerdyke during the war, “Theirs no one like a mother.”